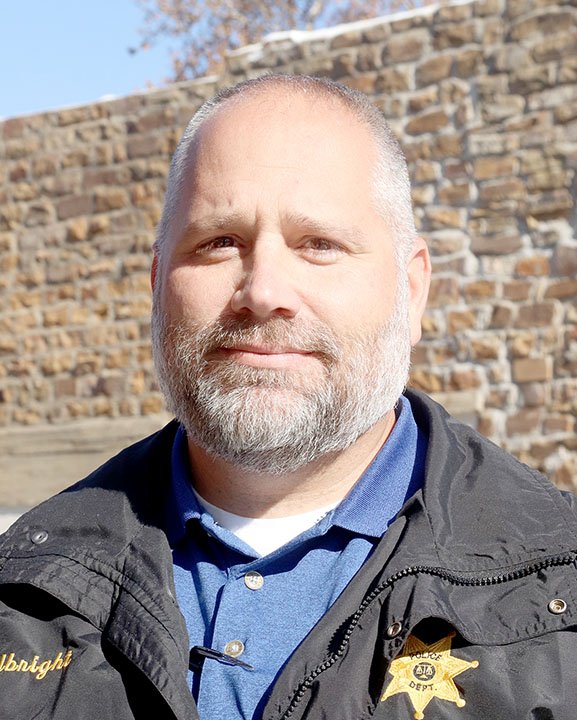 LINCOLN -- Lincoln's new police chief, Kenneth Albright, said he applied for the position because Lincoln is "home" to him, where his family and friends live.

"I have a lot of ties to the community," Albright said.

Albright, a life-long resident of Lincoln, started in his new position on Nov. 14 and has been spending time looking at the department's policies and equipment. He said he wants to see if any of the policies need to be updated and also would like to bring the department's technology into the next generation.

Albright's law enforcement experience includes working for Lincoln Police Department from 1999-2003 and working as a jail deputy with the sheriff's office from 1998-1999. He was a volunteer firefighter for a time with Lincoln Fire Department.

Albright said he wants to bring the knowledge and training he received while working for the Sheriff's Office to Lincoln Police Department and hopes to make it into a more professional department.

He said he realized he was moving to a department with only five officers, which includes the chief's position and a school resource officer. His goal, however, is that the city will find the money in the 2019 budget to hire one more officer.

Many people don't realize the difficulty of only having five officers, especially when one is tied to the school district for most of the time, Albright said. He noted that officers have vacation and sick days, training and have to attend court.

"The reality of it," he said, "is that you can only stretch it so far."

In addition to a sixth officer, he said another goal is to advocate for more technology so that the department has the best equipment available to get the job done.

"It's going to be a long road," Albright said.

His plan will be to have goals and then prioritize them based on the money available.

"When you have a smaller department, money is tight," he said.

Albright said he realizes it sounds like a cliche but he sees his career in law enforcement as a calling.

"It's what I always wanted to do," Albright said. "I've had the privilege of working with a lot of good officers and leaders in my years. It's a rewarding career choice."

Personally, Albright said, working as a criminal investigator was probably the most rewarding job because he was able to help families and victims find closure.

According to Albright's resume, he has an associate's degree in criminal justice from Northwest Arkansas Community College and a bachelor of science degree in organizational management from John Brown University in Siloam Springs.

Albright said he earned his degree from JBU while working full-time and thought organizational management would help in his law enforcement career but also returned to college to achieve a personal goal to get a college degree.

He is a member of Lincoln School Board and said he plans to remain in that role.

Mayor Rob Hulse hired Albright as the new chief after firing former Chief Brian Key in October. The Arkansas State Police has completed an investigation of Key and that report now is with the Washington County Prosecuting Attorney's office, according county Prosecutor Matt Durrett. Durrett recently said he did not know when a decision would be made based on the results of the investigation.

No information has been released yet on why the State Police investigated Key or why Key was fired.

Hulse last week said he believes Albright has the leadership ability to take the department in the direction the city of Lincoln needs.

"His extensive training and experience with the county proved him to be a very strong candidate for chief and I'm very happy to have made the offer and brought him on board," Hulse said, adding, "I think he's going to do a great job."