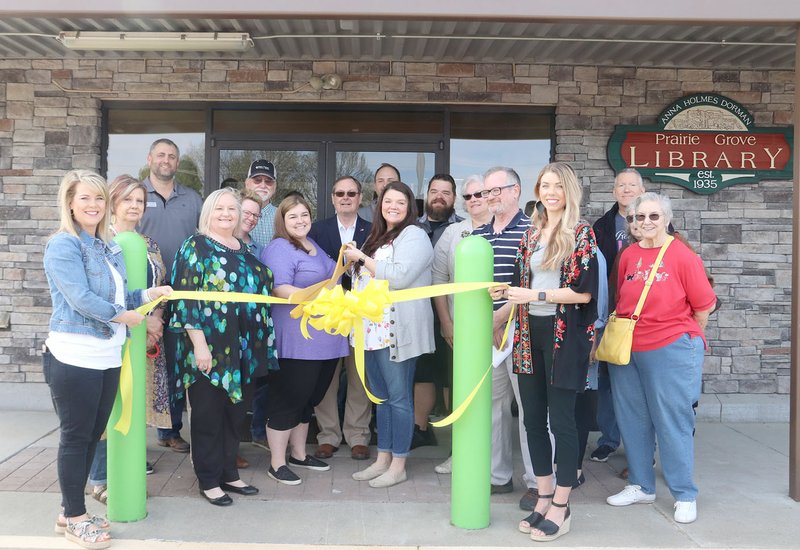 Pendergraft, who now lives in Little Rock, served as librarian from 1986-2005. Her daughter brought her to Prairie Grove for the ceremony and to see the new facility. She said she wasn't going to miss it.

• City crews, for a multitude of projects.

"This makes me want to cry," said Pendergraft as she sat in one of the new chairs in the library, visiting with old friends. "This is absolutely beautiful."

Pendergraft said Prairie Grove always has supported a library. She said, though, she "never would have imagined" its new building.

"I'm proud of Prairie Grove Library and proud of this city," Pendergraft added.

The new Prairie Grove Public Library opened with a flair Saturday morning with a flag ceremony, singing of the National Anthem and an opportunity to thank the many people involved with the project.

Thank You To Many

Hudson thanked many for their vision of a new larger library to serve the community, in particular City Council members.

"These things can't happen without these folks," Hudson said. "This is a big project and we work on a small budget. But we're patient and waited for the right building to come along at the right price, and with a lot of donations, made this happen. We do things in Prairie Grove that a lot of other cities just envy us. And these City Council members, please thank them for what they do."

"These girls, they do a fantastic job. They have worked under (tight) conditions for several years, I'm sure they are still pinching themselves, but they have been in very small facilities, have had to take books out of the library just to put books in the library...They have done a fantastic job and kicked into high gear to do this. This is above and beyond normal librarying when it comes to moving."

Hudson also recognized efforts from Friends of the Library and the Library Board of Directors.

Hudson noted the city purchased the former Walmart Express building from Harps in February 2018, more than a year ago. The building was full of shelving, debris, lots of freezers and refrigeration units.

"It was a mess," he said. "I tell you, all the stuff, you think you might be able to sell for a little bit. Well, we sold it ... for a little bit. We were just so happy that someone paid us to take it out and get it out of the way so we could take the next step."

The building was emptied and others came in for demolition work to make way for renovation and remodeling on the inside.

"We got it done and I'll let the library speak for itself when you get in there and see it," Hudson said.

He said the city's next project for the library will be to sell the gas pumps outside and turn that area into a pavilion with planters, tables and benches.

Larry Oelrich, director of administrative services and public works, gave an update on the construction work. He named all the contractors and individuals involved in the renovation and especially thanked city workers.

"City staff did 50-60 percent of the work in the building," Oelrich said, adding city workers also spent about three weeks moving books, equipment and furniture from the old library to the new library.

Oelrich also explained financing behind the building, noting that Walmart spent $1.4 million on the building and land and the city was able to purchase it from Harps for $650,000. Another $150,000 ($50,000 under budget, he said) was spent on the renovation.

"We got a lot of bang for the buck when you consider we have 15,000 square feet of library space here, compared to the 6,000 square feet we had downtown in the two buildings," Oelrich said. "We have about 250 percent more space. We have room to spread out."

Funding sources included money donated specifically for a new library or library expansion. The city received $200,000 from the Joy Webb Foundation, $120,000 from Prairie Grove Friends of the Library through an anonymous donor, and $50,000 from the Littleton Trust. The rest came from city funds.

Matt Huber, on behalf of the Friends of PG Library, presented a $2,000 donation for a curio cabinet to display historical items. The money was raised by the used bookstore.

Prairie Grove Heritage Needle Arts Group donated a quilt that is hanging in the library.

Megan Wood, children's coordinator for 12 years, closed the ceremony along with Amanda Thulin. Wood lost her composure a few times, crying as she thanked everyone for the new library building.

"We just want to say thank you. Guys we're so grateful. You have no idea how much this means to us. Obviously. This has been in the works for so many years. Our community deserves a building like this. Our kids deserve a building like this. We're here to serve you and we're so proud and so honored that we're the ladies that get to do it."

Thulin named many community volunteers who showed up at the library to help shelve books and do other tasks to help the city get the building ready.