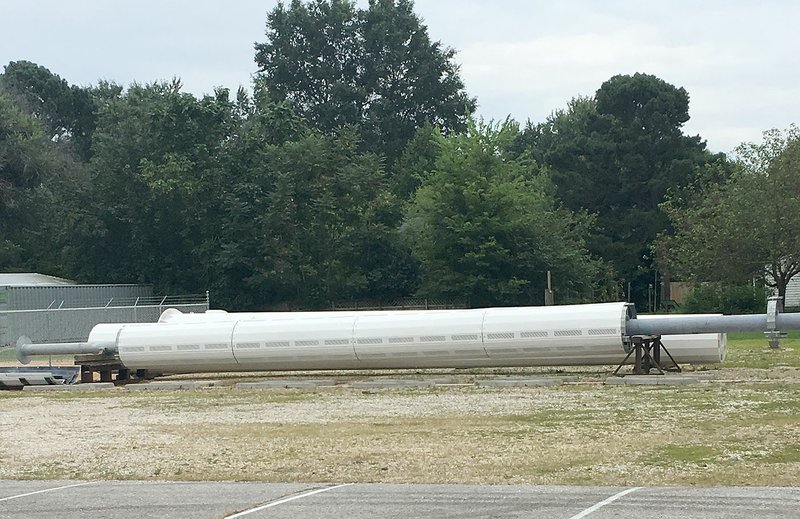 RICK BRAMALL SPECIAL TO ENTERPRISE-LEADER Parts of a new cell tower are set on the ground after Smith Communications began taking down the tower last week. The tower was not inspected by the city as required.

The city of Farmington issued a stop order on the cell tower in a June 18 email to Kayla Kramer, the company's site development manager.

Bramall wrote that the city was concerned because the monopole required special inspections in addition to inspections by the city. The cell tower was already up and almost finished before city officials were aware of any work.

"There is no way anyone can verify the requirements set forth in the structural plans now that the concrete has been placed," Bramall said in the email. "The location of the monopole is in such a place that if the foundation fails it could cause catastrophic damage to property and people."

"They could not come up with anything that was reasonable to satisfy us it was built the way it was supposed to be built," Bramall said.

Smith Communications did not have any documentation to show it had been inspected by a third party, Bramall added.

After some discussion, Bramall said Mike Smith told city officials the company would dismantle the cell tower, remove the concrete foundation and start over.

Work to bring down the tower started Thursday and was finished by the end of the week.

Mayor Ernie Penn on Monday said the city did not want to accept the risk of a tower without verification it was built according to the design plans and city requirements.

"It's all about risk," Penn said. "If you can't verify that, it's not acceptable."

The situation was unfortunate for everyone involved, Penn said.

"Smith Two-Way Radio did the right thing," he said. "Sometimes when you make a mistake, you bite the bullet and go on."

Penn said company representatives did not give a reason why the tower was not inspected.

Kramer on Monday referred any questions to the Fayetteville office. She did not know when the company would start installing a new tower. Mike Smith could not be reached for comment Monday.

Farmington Planning Commission approved a permit for Smith Communications for the new, 150-foot cell tower at its Aug. 27, 2018, meeting. The tower will have a white, stealth flagpole design with five separate canisters for internal, concealed antennas to accommodate multiple carriers.

Verizon Wireless will occupy two canisters as the anchor tenant and the remaining canisters will be available for additional carriers or for Verizon to expand.

Smith Communications is leasing land from Farmington Church of Christ on Main Street for the cell tower. The tower will be located in a gravel area behind the church.

Design plans show the tower will have a 40x40-foot base that is surrounded by a fence. The company will plant trees on the outside of the fence. In addition, the planning commission is requiring the company to put in a paved driveway to the tower.

The cell tower is the first monopole installed in Farmington under the city's new telecommunications ordinance, adopted at the April 2018 council meeting.