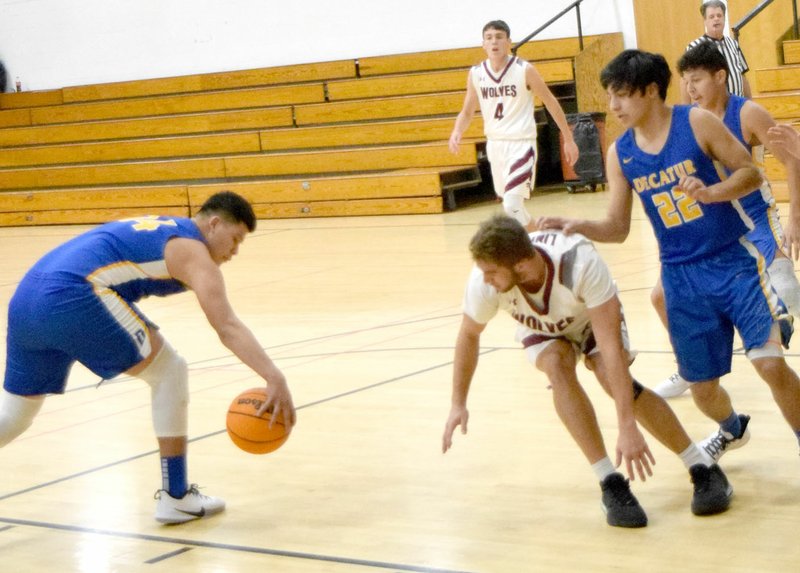 Westside Eagle Observer/MIKE ECKELS After stealing the ball away from a Wolves player, Edgar Herrera (left) stops for a second to gain control of the ball before passing it off to a teammate during the first quarter of the Lincoln vs. Decatur basketball contest at the old middle school gym in Lincoln Nov. 26.

LINCOLN -- For Decatur coach Fess Thompson, the struggle to get his team ignited continued Nov. 26 when the team traveled to Lincoln for the second annual Turkey Shoot basketball tournament. And the night ended badly for the Bulldogs as the host Lincoln Wolves varsity rolled over Decatur by 27 points.

The Bulldogs were up against a much bigger and stronger 3A conference school and were considered the underdogs in the contest. In the first half of the contest, the Bulldogs managed to stay right with the Wolves, holding the lead several times before the offense went cold on the boards.

The first three minutes of the first quarter were all defense as both teams had good blocks coupled with consistent defensive rebounds to keep the contest scoreless until the five minute mark when the Wolves hit a field goal for two. The Bulldogs answered with a field goal of their own on the next possession tying the game at two points for each team. With 1:44 left in the quarter Decatur gained the lead for the first time and managed to hold onto its slim lead at the buzzer.

Halfway through the second quarter, the Wolves' offense caught fire and by the end of the first half they held the lead by over 15 points.

Lincoln continued to pound Decatur on the boards, eventually running away with the contest 51-20 by the end of the third quarter. Decatur offense tried to mount a run halfway through the final quarter but for every Decatur field goal Lincoln answered with two of its own. When the final buzzer sounded, the Lincoln Wolves took a 57-30 win over the Decatur Bulldogs.

Valley Springs won the tournament. The Tigers received a first-round bye then beat Elkins, 44-34, in the semifinals and routed Future School of Fort Smith, 80-45, in the championship.