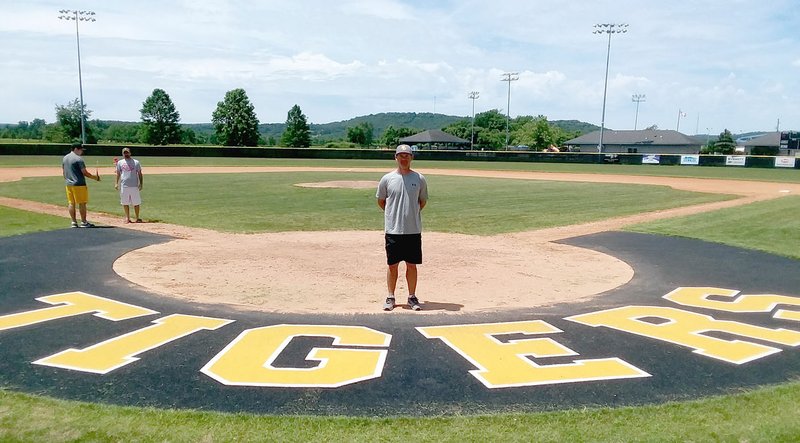 MARK HUMPHREY ENTERPRISE-LEADER The return of Mitch Cameron as Prairie Grove head baseball coach in May breathed fresh life into a program that shined under his leadership from 2008-2015. During his absence, the diamond at Rieff Park was improved with a $12,000 halo inscribed with Tigers surrounding Cameron installed by former coach Chris Mileham, who coached the Tigers for the 2016-2018 seasons. Cameron inherits the best of both worlds, carrying on his own legacy plus thriving on improvements made by Mileham.

PRAIRIE GROVE -- Three major changes, highlighted by the birth of a son, each create an impact for Mitch Cameron as he returns to coach the Prairie Grove baseball program.

In many ways Cameron never left the community.

Cameron took a job as head baseball coach at Rogers Heritage in the summer of 2015, but never relocated his family. His wife, Mallory, continues to teach at Farmington. Their daughter, Ava, was only 14 months when her dad last coached at Prairie Grove in May of 2015.

Win or lose, she darted onto the field to be swept up in daddy's arms as soon as games were over. She is now five and beginning Kindergarten.

The couple's son, Brooks, just turned two in May. This became one of the major deciding factors in Cameron's return. No longer is dad out of the picture for such a large part of Brooks' day. The little boy will catch on to baseball through first-hand experience -- watching dad coach the game.

"You know, for him to be able to come out and watch games and hang out at practice where before he couldn't because it was so far up there, yeah, that played a big difference in that. Him just being able to come hang out," Cameron said.

Cameron was putting 60 miles a day on his vehicle making the round-trip to Rogers and spending 80 minutes on the commute. With both of those numbers drastically reduced, Cameron looks forward to what all baseball players and coaches relish -- trotting into home with no pressure.

"To be able to go 10 minutes will be awesome for my family and for me. I actually put in more work (at Rogers Heritage). Now I feel like I need to be home," Cameron said. "I didn't get to leave early enough to do some of those things (with my family). So, it's exciting to be closer to home."

Former Tiger coach Chris Mileham procured a professional baseball scoreboard which the community helped install along with other improvements to the Tigers' home field at Reiff Park. Mileham honored Prairie Grove's baseball heritage by getting permission to place the names of Ty Tice (Class of 2014) and Jalen Beeks (Class of 2011) along with their professional baseball affiliations prominently on the scoreboard.

Beeks attended Crowder College at Neosho, Mo., then broke into NCAA Division I baseball with the Arkansas Razorbacks. He was drafted by the Boston Red Sox in the 12th round of the 2014 MLB draft making his Major League debut last year. Following a trade, Beeks pitches for the Tampa Bay Rays.

Tice attended the University of Central Arkansas on a baseball scholarship and was drafted by the Toronto Blue Jays in the 16th round in 2017. Tice currently plays Double A baseball with the New Hampshire Fisher Cats of the Eastern League.

In June Logan Gragg, a 2016 Prairie Grove graduate, was drafted in the 8th round as the 245th overall pick by the St. Louis Cardinals coming off a solid season at Oklahoma State in which he helped the Cowboys advance to the NCAA Super Regionals and get within one win of the College World Series.

"It's really awesome to see Ty's and Jalen's name up there and now to be able to put Logan's name on there is real exciting to have and really display those guys. We're going to designate an area to put up all the records, the state tournament records, too, to add to that," Cameron said. "That scoreboard is awesome. It's a great way to advertise companies and get those guys some publicity."

Prairie Grove now hosts its own spring break baseball tournament, the Jarren Sorters Memorial, named after a devoted baseball player, who would have graduated this spring. Jarren, son of former athletic director Joey Sorters and his wife, Donna, who works in the district as a speech pathologist, passed away Aug. 11, 2016, a month shy of his 16th birthday after a year-long battle with sarcoma.

After his death the family organized the Play4Jarren Foundation, a non-profit organization dedicated to helping families deal with childhood cancer. The annual Jarren Sorters Memorial Baseball Tournament serves as a fundraiser.

"Yeah, I get to have Jackson. That's exciting to have. It's crazy, I can remember him when he was real little and looked up at me. For him to be a junior it's awesome to coach through him, coach that group and you got some younger siblings, Kyle Fidler, Ryder Orr, some of those guys where I coached their brothers it's fun having them, too."