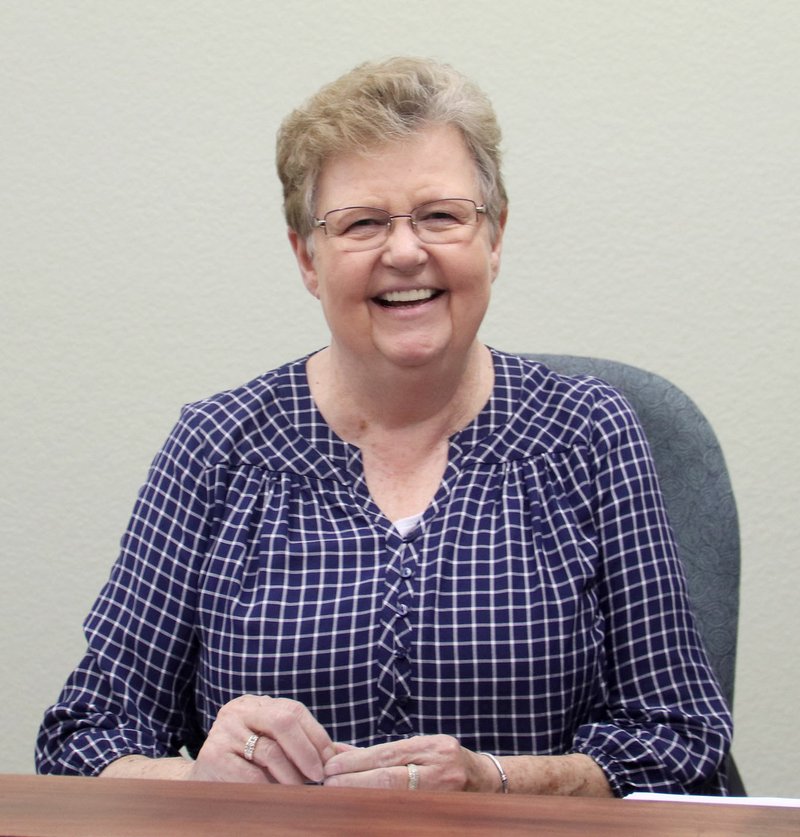 PRAIRIE GROVE -- Chief Court Clerk Susie Copeland with Prairie Grove District Court had one last session before she retired June 28, a luncheon to celebrate with the judge, court staff, police department and a representative from the prosecuting attorney's office.

"For 14 years, we've had virtually no issues with the way the court runs," said District Judge Graham Nations, who presides over Prairie Grove's court. "She's done the work of two people most of that time. She's always the first to get here and leaves after everyone else is gone."

Nations added, "Her honesty and work ethnic are inspiring beyond words. The city will miss her."

Copeland started part-time with district court in June 2005. She was named chief court clerk in February 2006.

In 2005, Prairie Grove District Court was located in an old building on Buchanan, along with court offices and the police department. The original structure of this building was built around 1933 as a Magnolia Gas Station.

Copeland remembers many problems with that building.

"The first year it was struck by lightning. We had the ice storm, it flooded twice in one month. Lightning struck it again."

Over the years, many changes have been made to improve the court, she said, with the biggest change moving it to a new location on East Douglas Street in 2013.

Before, the district court office closed during lunch. Now, it is open all day for people who need to get information or pay fines.

Security windows are in place at the office. People coming to court only have one way into the courtroom. They also have to go through a metal detector and Prairie Grove police officers are present.

There have been times, Copeland said, she has been scared of what someone would do. The old building had sliding windows in the office at one point. She remembers a man who was so angry she thought he was going to come through the window to get her deputy clerk.

"We've had threats," she said.

The court's new facilities have more seating for people coming to court and also provide a separate office space for the prosecuting attorney and public defender. A private room is available for defendants to meet with their attorneys.

"It's better and much safer in this building," Copeland said.

The district court office works in conjunction with the police department and Copeland said one way has been to use money from the Court Automation Fund to purchase technology and other items for both organizations. People who pay off their fines per month are assessed an additional $10 fee on top of their monthly payment. Of this, $2.50 goes to the court and $7.50 to the state.

Copeland said the money can only be used for designated purchases. She has used the money to purchase computer scanners and printers for police vehicles, new computers for the court office and other items, such as printer paper.

Working as the court clerk has been an education on how the judicial system works, Copeland said.

She said Prairie Grove's district court tries to work with defendants. Some courts will issue a warrant for failure to appear and failure to pay fines the first time.

"We give people the benefit of the doubt," Copeland said. "We allow them to miss a payment without issuing a warrant."

She noted circumstances may have prevented a defendant from making a payment one month, such as losing a job, car problems or medical issues.

"But they have to let us know about the situation," she said. "When they are two payments behind or didn't appear for two times, that's when we'll issue a warrant, unless they've come and talked to us."

Besides working for the court, Copeland has held jobs in a variety of areas. She started as a teacher in Elaine, Ark. Her background was physical education but she was teaching Spanish. She loved teaching and loved the kids but it was a poor area and was very eye-opening, she said.

She worked one summer at Baldor Electric in Fort Smith while her cousin was on maternity leave and that turned into a full-time job. She then worked in Little Rock for the University Medical Center and at the state Capitol in the Science Information Liaison's Office.

"You take every opportunity you can to learn," Copeland said.

Copeland expressed her appreciation to the city for the opportunity to work with the court.

Others expressed their appreciation about her work as chief court clerk.

Chris Workman, Prairie Grove police chief, said Copeland is "probably one of the most trustworthy people you'd meet. She's by the book."

He added, "Our court is well run and updated on our security. She's made that happen."

Charles Duell, deputy prosecuting attorney, attended Copeland's farewell luncheon and he said, "We the county appreciate her guidance, kindness and assistance throughout the years. She's done such a good job and we wish her the best."