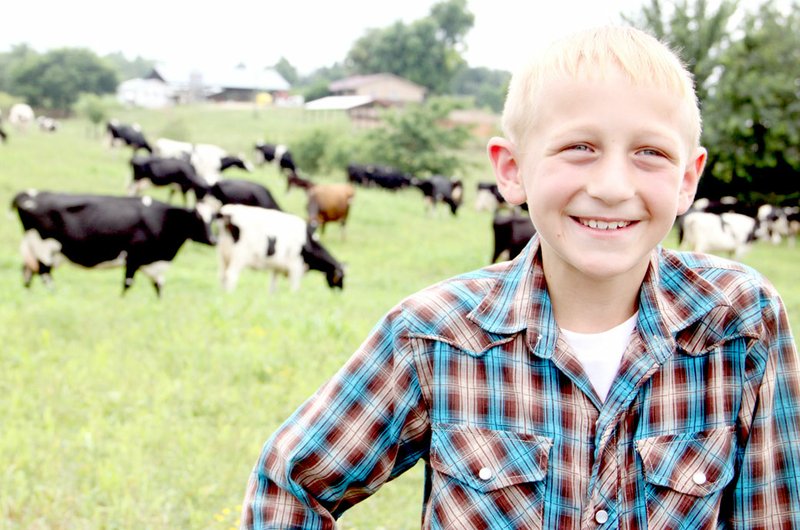 FILE PHOTO Levi Weaver, 10 years old in this photo, tells about living on a dairy farm and being active in 4H during media day for the 2015 Washington County Farm Family of the Year.

Several local dairy farms have been named Washington County Farm Family of the Year during the past nine years.

The Farm Family of the Year program is sponsored by Arkansas Farm Bureau and a number of other agricultural services. The program has been around more than 70 years.

Michael Weaver is a third generation dairy farmer and he, his wife Kristi and son Levi were named the 2015 Farm Family of the Year for their farm named Weaver Dairy, a 100-acre farm located in the Hogeye community.

At the time of the award, Michael Weaver had been a full-time farmer for 10 years.

The family was selected for the 2015 honor because of their devotion in giving back to the community and their work to instill new practices on their farm. In addition, the committee making the selection was impressed that both Michael and Kristi had committed to being full-time farmers, according to Berni Kurz, the former staff chairman for Washington County's University of Arkansas Extension Office.

Scott Davis is following in the footsteps of his father and grandfather on the family land. His father established a dairy farm on this land outside Prairie Grove on Pearson Ranch Road in 1977 and Davis became a partner with his dad in 2001.

Scott and Cassie Davis, at the time, said they had several goals as dairy farmers and the primary ones were to improve animal welfare and be a good steward of the land. Davis said his focus is quality over quantity, improving the quality of the cow.

Davis said he decided to stay with the family business because he loves the outdoors, working with livestock and loves working the land.

The Harts had worked the farm for generations and lived in a home built before the Civil War. Their farm is located two miles north of Prairie Grove Battlefield State Park and overlooks pasture land and the Illinois River to the east.

In 2010, the 250-acre spread included dairy and poultry operations. The family milked 90 cows twice a day, with each cow producing about 50 pounds of milk each day.

Print Headline: A Look Back At Farm Families Of The year