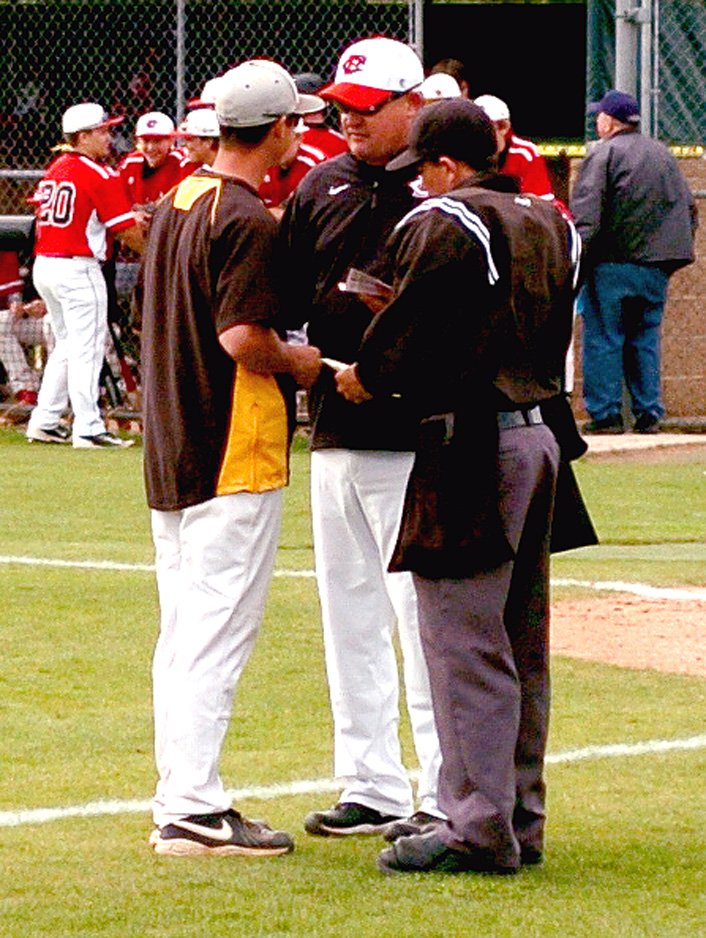 MARK HUMPHREY ENTERPRISE-LEADER Prairie Grove coach Mitch Cameron and Farmington coach Jay Harper confer with the plate umpire during a rivalry baseball game on April 27. 2015. The Tigers beat Farmington, 12-9, in that contest but haven't won since without Cameron, who rejoins Prairie Grove after four seasons at Rogers Heritage.

ROGERS -- Miscues by committee did in Mitch Cameron's squad as Roger's Heritage lost a road game at Harrison 18-7 aided by 7 War Eagle errors -- each by a different player.

The March 7 nonconference loss was the first of three games Cameron coached against 4A-1 schools during the 2019 baseball season. Cameron returns for his second stint as Prairie Grove head baseball coach after four seasons at Rogers Heritage. He was hired during a May 21 school board meeting.

The War Eagles scored 2 runs in the top of the first and 3 in the second to open up a 5-1 lead, but faded down the stretch. Vance Tobol (2-of-3, 3 RBIs) tripled and hit a home run to lead Heritage. Asher Cameron was 1-for-4 in the batter's box. He also pitched 2 innings allowing 1 hit and striking out 2 Saints while issuing 4 walks leading to 2 unearned runs. Asher Cameron's 55 pitches were the second most among five hurlers Heritage used on the day.

A 5-run third inning gave Harrison a 7-5 lead. The Goblins exploded for 10 runs in the bottom of the sixth to put the game out of reach.

Harrison finished 20-9 overall and 7-1 in league play. The Goblins reached the State 4A quarterfinals suffering a narrow 4-3 loss to Valley View.

State 4A baseball finalist Shiloh Christian handed out a 12-1 loss on March 15 to 6A Rogers Heritage coached by Cameron, who came back to Prairie Grove after the 2019 season.

The Saints dominated the nonconference contest. Shiloh scored 4 runs in the top of the first inning, then added 2 in the second, 1 in the third, 2 in the fifth and 3 in the seventh. The Saints didn't overwhelm Heritage pitching going 6-for-28 with 5 RBIs and 5 strike-outs executing only one extra-base hit a double from Marcus Brown.

Shiloh did its damage in drawing 7 walks and through 6 batters hit by a pitch along with 3 stolen bases and capitalizing on 5 Heritage errors. The War Eagles used 5 pitchers, who threw a combined 148 pitches.

The War Eagles struggled against Shiloh pitching going 4-for-24 and walking 3 times with 9 strike-outs. The Saints committed one error and did not hit any batters with a pitch.

Heritage, which tended to play better in the early innings this past season, took a 2-0 lead on a pair of unearned runs in the bottom of the second. The War Eagles finished with just 4 hits in 22 at-bats for a .182 average and managed only one extra-base hit. Farmington allowed two base runners on walks and as many hit by a pitch.

Farmington answered with 4 runs in the top of the third assuming a 4-2 lead. Myles Harvey went 2-for-2 with a walk and scored a run for the Cardinals. The score remained that way until the War Eagles scored 4 runs in the bottom of the sixth inning to rally for the nonconference win.

Vance Tobol (2-of-3) earned Heritage a 4-4 tie in the sixth with a two-run single. Asher Cameron belted a triple scoring 2 runs for Heritage to give the War Eagles a 6-4 lead.

Ward Richardson picked up the win for Heritage with 2.2 innings of shutout baseball. He allowed just one hit, struck out three with no walks.

Drew Sturgeon started on the mound for Farmington and threw 68 pitches before giving way to senior Trenton Austin, who finished up with 13 pitches to get the Cardinals out of the sixth.

Farmington could not manufacture any runs in the top of the seventh and Heritage claimed a 6-4 win.