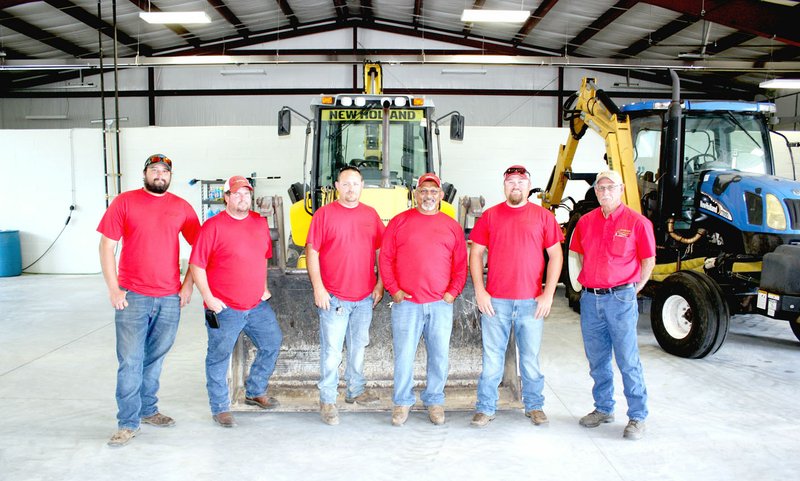 MARK HUMPHREY ENTERPRISE-LEADER City public works employees (from left): Tyrell Murphy, Travis Carlin, Brian Clevenger, Isaac Navarro, and Tanner Denham; along with Floyd Shelley, public works manager; are excited to work out of a new Public Works facility large enough to keep tractors and equipment inside out of the elements. An open house allowed the public to tour the facility Friday afternoon.

Shelley discussed the ideas he had in mind for a new building with Jim Key of Key Architecture. Key made it "five times better," Shelley said, adding, "the appearance is beyond what we thought."

The goal was to build a new public works facility that would take care of the city for the next 20 years.

"I think we made that," Shelley said.

The 11,000-square-foot facility is located on seven acres on Broyles Street. The city purchased the land from Farmington School District about a year ago for $158,000.

The city paid Key Architecture about $55,000 for architectural, engineering and environmental services. Southern Building Services of Fort Smith was awarded the construction contract for a base cost of $973,000, plus $79,000 in change orders.

Mayor Ernie Penn said the city estimated the project, including land, would cost about $1.5 million. The total ended up around $1.26 million, "about $250,000 less than we planned."

Penn said the city had been working more than 10 years to find a new place for a public works building.

At one point, he had planned to use another piece of land along Broyles Street that was part of the northern edge of Creekside Park. Neighbors spoke out against the proposal and Penn withdrew it from consideration.

The city also seriously looked at land on Gibson Hill Road but the cost for a water line was too expensive.

The city previously approached the school about buying its land on Broyles next to Williams Elementary but at the time, the School Board was interested in selling all of the land, not a portion on it.

At one point, Shelley said, the city had a list of 13 potential locations. In his mind, the school property has always been the number one spot.

Last year, the school contacted the city to see if it was still interested in the land, Shelley said.

"It has worked out perfect," he said.

"That was the perfect location for us," Penn said, adding the city's patience and diligence to find the right place paid off.

The location gives public works employees easy access to all parts of the city, Penn said. They can use Sellers Road to get to Double Springs Road and go on Broyles Street to get to Main Street.

"This is just a great, great facility," he said. "The design of the building is to look like the school and it's not intrusive to the neighborhood."

The building has three offices, a restroom and a large conference/breakroom for employees. The main part of the building, however, is a spacious, open area that is 80-feet by 100-feet. A smaller building behind the facility will be used to store materials to remove snow and ice from streets.

Now, Shelley said, the department has been able to "totally" remove clutter, both inside and outside. Everything has a place, he said.

The city moved to its new location about two weeks ago from a building on Rheas Mill Road with basically only one bay and a small outside area to store equipment. It was located next to the high school softball and baseball fields.

The new building eliminates the danger of having an accident with children nearby, Shelley said. It also eliminates problems during baseball and softball season because of vehicles parked in the lots adjacent to the public works building.

The new building has bay doors located on both sides which makes it more efficient for employees to get tractors and equipment in and out of the facility. There's space to park equipment inside the building and protect it from the weather.

"We have room to store our stuff and save wear and tear on our equipment because it can stay indoors," Shelley said.

One of the biggest benefits, Shelley said, is having room to work on vehicles and equipment that need repairs. Before, his employees would pull a vehicle into the bay and there was not any extra space in the building.

Now, employees can work on a tractor or another piece of equipment with plenty of other room available.

Co-worker Travis Carlin echoed the sentiment, saying, "It's nice to have a nicer, bigger facility compared to the old shop. This right here is so much more better. There's more elbow room in this one. This is tremendous."

The building also has a wash bay, shelving units, wall space for hanging tools and other equipment, paved parking lots around the facility, video security surveillance, outside lighting, landscaping and green space. It is surrounded by a fence.

One difference Floyd has noticed is the quietness of the area. Broyles Street is in front of the building but the complex is surrounded by trees and grass. Kessler Mountain and other mountain tops can be seen in the distance.

As a part of the project, the city decided to add an attached area for an unmanned fire department substation. Three fire vehicles -- an engine, brush truck and medical truck -- are parked at the substation. The city paid for the square footage of this section from its general fund, not bond money.