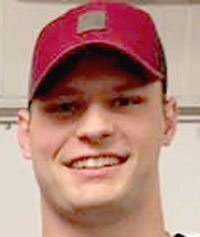 Dylan Soehner: "It's definitely an experience. It's humbling. You grow up as a kid and watch it on TV. Those guys are your role models. It puts you in a position where you influence others. You become a role model to them. It's just a good feeling to know that you've become a role model."

WCEL: "I've seen Facebook photos of you in your Iowa State jersey No. 89 reading to children in classroom. Tell us about that?

Dylan Soehner: "We've got opportunities to do community service. We've done tornado clean up, we've done hospital visits. We've went into schools and read to kids. (Iowa State head football) Coach (Matt) Campbell, one thing he takes pride in his program. He considers the players as 'his guys.' So whenever he can get his kids out into the community, it shows what the program is all about."

WCEL: "How do you keep from getting caught up in hype and glamour that comes with the spotlight such as in the preseason when everyone's undefeated?"

Dylan Soehner: "We talk about that a lot and Coach Campbell, he talks about that a lot. With Coach Campbell one of his deals is that ego will just kill more teams than you can think. Another thing is you mentioned when everyone's undefeated in preseason, our fan base is incredible. People will write all kinds of good things when it's preseason and everyone's undefeated. On the other hand if you have a bad game, people write all kinds of bad things. We try not to read that stuff. We try to keep everything in our walls. We're cautious of it. We take it with a grain of salt."

Dylan Soehner: "That was the craziest feeling like you can't describe it. To go in their place, we were down 14-0 in first 10 minutes, to be down early and fight back with my teammates, that was just an incredible feeling. It was the first game I actually played meaningful reps on offense. Up to that point I had been playing a lot on special teams. I was actually playing in the heat of the moment -- it was something. When the clock hits zero and it's dead silent, then our fans start screaming for us, it was just incredible.

Then in the next two weeks TCU comes into our place and they're undefeated and we beat them. Just a combination of those two wins was just incredible. Not many people can say they beat a Heisman trophy winner. I don't play defense, but our guys on defense they did it."

WCEL: "What about playing against former OU quarterback Baker Mayfield?

Dylan Soehner: "He's fun to watch. He's explosive. He's a good football player. He was slinging it. Another thing that's funny about that day, we started a fifth-year senior walk-on quarterback. He threw for over 350 yards in that game. It was incredible. We're just trying to get to the point where wins like that are expected. That win got national attention. What we're trying to do is change the culture so that if we win a game like that it's not going to draw national attention because we're expected to win it. I just wonder how many Heisman quarterbacks we have to play against? They keep pumping them out."

WCEL: "My family went through Iowa just a few weeks ago and there was spring flooding that closed I-29 going north and south on the western boundary of the state causing them to have to take a big detour to get around the flooding. Did flooding affect your area?"

Dylan Soehner: "We don't have any flooding where I'm at right now (in Ames, Ia.), but it seems if you drive 20 minutes in any direction there's flooding."

WCEL: "How did you adjust to Iowa weather with colder winter temperatures?"

Dylan Soehner: "You win two weeks in the spring and two weeks in the fall when it's about right. I'd never seen a negative temperature before so that was kind of creepy. Last winter it got down to a negative 60 wind chill so there was two days of class that we got out."

WCEL: "How many credit hours are you carrying to earn First-Team Academic All-Big 12 honors? And what about this award as one of four Athletes of the Semester?"

Dylan Soehner: "Usually 15 a semester. Last semester I was at 18. I had some things I needed to catch up on so I took a heavy load. Then I had a little sickness during the time of spring ball going in. The Student-athlete development staff members who oversee each sport nominate you, and they vote on monthly winners. I got picked as one of the Athletes of the Semester for my hard work and dedication in the classroom during the spring semester."