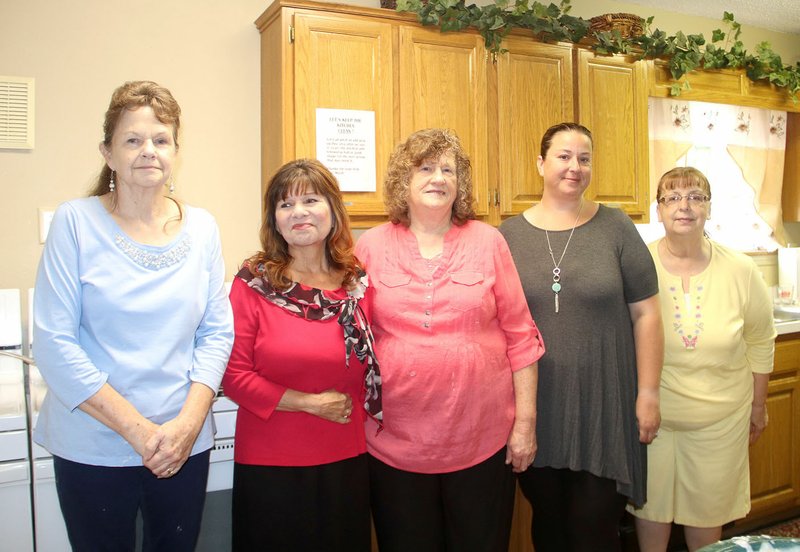 LINCOLN -- A Lincoln graduate, employee and pastor encouraged Lincoln 2019 graduates to make good choices, make the best of the opportunities they've been given and to treat people with kindness and respect.

Mitch Huffaker, maintenance director for Lincoln Consolidated School District and pastor for New Mission Church in Springdale, spoke at the senior breakfast for 2019 graduates, held May 22 at Lincoln Assembly of God Church. The annual breakfast is sponsored by Lincoln Alliance Ministerial Brotherhood.

Huffaker's message to the students on the day before their high school graduation ceremony was to tell them he did not have a good foundation as a child, made bad choices as a teenager but came to a point where he knew things had to change.

Huffaker's mom was 16 and his dad 17 when he was born. His mom had lost her brother a year before and started on a path where she didn't make good decisions, he said. When he was born, he lived with his grandmother and mom.

His parents were not married at the time but then married about three years later.

"They were just kids and made some choices. By all figures, I was an accident but I know in the mind of God, I was no accident," Huffaker said.

Huffaker's grandfather was killed when he was about 5 years old when some teenagers threw a rock through the windshield of his grandfather's vehicle. Huffaker said the death affected his dad.

"My dad was in his early 20s and that started him on a path. That affects you, it affects anybody. That started some things down the path the wrong way in their life," Huffaker said.

His parents were doing things they shouldn't have been doing. They divorced after about five years when Huffaker was in elementary school.

Growing up, Huffaker said he did not really have any boundaries or discipline and basically did what he wanted to do and went where he wanted to go.

"That's not really the best thing," Huffaker said. "We don't like barriers. We like to push against barriers but really they are important. Whether we like to admit it or not, we need to know there is some kind of guard there, that someone cares enough about me to put some guard there in place."

He realized he didn't want to live in the same lifestyle but at the same time began pretending to be a part of that lifestyle. He would pretend to drink and pretend to smoke like others around him.

In high school he found himself mixed up in that environment and got involved with the wrong crowd and began drinking and going to parties.

That opened the door to other choices, Huffaker said.

Huffaker said he was making decisions that were making his life hard. He began to feel a heavy guilt, he said, and began to understand that something wasn't right.

So he called the only person he knew who really knew how to pray.

"That was my grandma."

His grandmother took him in and he began to spend his time with her.

In high school, Huffaker said he was voted "Class Favorite" and that's because he was always in the middle of everything, always the "life of the party."

"Well, I'm hanging with grandma now. We're going to every potluck and every gospel singing in the county. And it was good eating."

Things were going better with his grandmother so Huffaker said he thought he could still make some of the choices he made before and be OK. He learned this wasn't going to work, he said. He learned you can't ride the fence.

He remembers coming home and his grandmother telling him, "You know the Bible says choose this day who you will serve." His grandmother was referencing Joshua 24:15, where Joshua says to choose who to serve. "But as for me and my house, we will serve the Lord," Joshua says in the verse.

Huffaker said he decided that day to choose a different path.

"That day, I decided, this is enough," he said. "I don't have to be this person...From that day on, the battle was basically over."

Huffaker said he learned a lot of hard lessons and hoped his story would help others so they don't have to learn the hard way.

His wife, on the other hand, he says has a different testimony, growing up going to church and being supported by her family.

No matter a person's background, Huffaker told the students they can make good choices.

He said he chose to believe in God and Jesus.

He told them his life is completely different from before. His parents have changed. He's married with three children, is a pastor and is a sophomore in college, taking online classes.

"I may not be something great in the eyes of the world but I've been given great opportunities and we need to make the best of our opportunities."

He encouraged the graduates to take the opportunity to do something great and be "something great." Being great, he said, did not mean a good job or the number of followers on Facebook.

Huffaker told the students to make their lives count.

"It's in your hands what you do with what you've been given," he said, noting, "My life was destined for a lot of bad things but I had a merciful God who was watching over me."