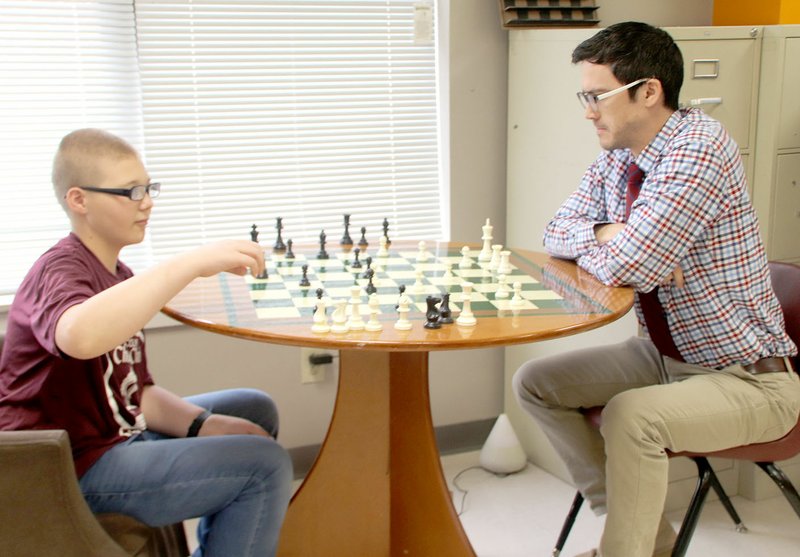 One player is selected to represent each state that participates, and the selection is based on the student's performance in chess matches and tournaments. Along with students from the U.S., kids from around the world will compete. Last year, a student from Germany won the tournament.

"He's an incredibly talented kid who has worked hard to improve his chess this year," Billingsly said. "We couldn't be more proud to have him represent our class and the school at the world tournament. He's an amazing kid."

The middle school has a program where students can choose from a number of extra classes. Jacob decided to try chess as his choice class and quickly caught on to the game.

Jacob is no stranger to competitions. He's been a member of the school's Special Olympics teams in multiple sports. Personally, his favorite sports are baseball, football and bowling. He doesn't like to read but enjoys math and science.

Jacob said he doesn't like to lose in chess.

"I like doing checkmate," he said, adding the most important part of playing chess is looking for threats. He plays chess in class and then the club stays until 5 p.m. on Mondays for more games and practices.

As part of the nomination process for the World Junior Chess Tournament in New Jersey, a student has to prove his disabilities.

Jacob's mom, Amber Pilkington, said Jacob has a rare genetic heart condition, brain disorder and a coronary artery disease. He has also been diagnosed with Duane Syndrome, a rare congenital condition that is characterized by the inability of the eye to move outward. He has the condition in both eyes and is going blind, his mom said.

He has been studied at Emory University in Atlanta, Ga., and at a facility in Seattle, Wash.

Pilkington said the stress of chess tournaments stresses Jacob but she believes the game is good for him.

"I'd rather Jacob be normal instead of sheltering him," Pilkington said. "This is good for Jacob."

"As a special education teach, it's incredible that Jacob and other students with disabilities are included in Mr. B's program," Acord said. "Jacob's able to be with his non-disabled peers."

Jacob also volunteers to deliver Meals on Wheels for Acord's class, and Acord said only a select number of his students are allowed to help with this.

"He's the most responsible one," Acord said.

Along with his mother, Jacob's older sister and father support his chess activities. His dad is his chess partner at home, Pilkington said.