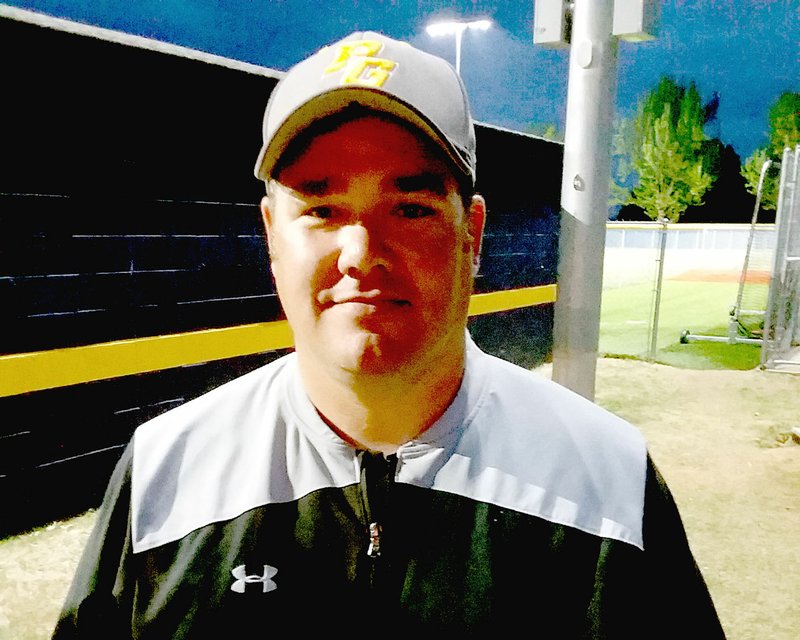 MARK HUMPHREY ENTERPRISE-LEADER Jed Davis served as interim head baseball coach for Prairie Grove baseball in 2019. Davis bridged the gap between the resignation of Chris Mileham Feb. 22 and hiring of Mitch Cameron on May 21. Davis and the Tigers went 11-13 overall and 1-7 in conference play. Prairie Grove was eliminated by eventual State Runner-up, Shiloh Christian, by a 7-1 score on April 23 during a first-round District 4A-1 tournament game on the Saints' home field.

Prairie Grove suffered a 7-1 season-ending loss on April 23 to conclude its baseball misadventures for 2019 that began days before the season-opener in February with the abrupt resignation of former head coach Chris Mileham.

The Saints defeated Prairie Grove in the opening round of a reformatted 4A-1 Conference tournament, pitting No. 1 against No. 9 after the Tigers won a play-in game at Gentry the night before just to qualify for postseason.

"(Garrett) Heltemes did a great job. Again, that's one of those seniors stepping up. Pitched really, really well for us. We hit the ball, we made some key bunts and we stole some bases and we executed really well," said Prairie Grove interim head baseball coach Jed Davis of the Monday play-in game at Gentry.

Stitches on Prairie Grove's baseball season unraveled, splitting at the seams as Shiloh scored its first two runs on passed balls and two more on an error in the bottom of the fifth inning to take a 4-0 lead.

Marcus Brown broke a scoreless tie on the passed ball to give Shiloh Christian a 1-0 lead. Sawyer Duddleston increased Shiloh's lead to 2-0 when he replicated the feat on another passed ball.

Cole Oswald added a two-run single pushing the Saints' advantage to 4-0 on their home field.

Prairie Grove fought to stay alive in its next at-bat. Couper Allen and Jadin Higgins walked to offset two outs. Drew Cates drove in a run by singling to cut Shiloh's lead to 4-1, but a fly ball ended the inning with two Tigers left stranded.

Allen wasn't surprised the Tigers extended the game against Shiloh.

"This whole season I've known that we could be a dangerous team for sure and I think that we kind of showed that tonight. We just couldn't pull it all the way through," Allen said. "Shiloh's a great team. They have a lot of good guys on the team and I'm really happy with how our guys competed today and kind of what our true colors kind of are so I'm happy with how we played."

Shiloh added insurance runs in the bottom of the sixth. Brown doubled down the third base line and Drew Dudley walked, putting the first two batters on base. Duddleston doubled into left center and the next two Saints, Walker Williams and Ian Lafferty, contributed sacrifice flies putting the Tigers at a 7-1 deficit which became the final when they could not score in the top of the seventh.

"That's something that in five, 10 or 15 years when they're going through something, they'll know what that's like. It didn't end the way they wanted it, but I'm really proud of the way they persevered," Davis said. "Tonight, it was quite a ball game until the fifth inning and then they (Shiloh) had a few timely hits and we made a couple of mistakes. You can't make those types of mistakes against the best team in the conference and it is what it is at that point."

Williams allowed just two hits over six innings to seal the win and struck out six for the Saints, who advanced to the district semifinals at Gentry and secured a Regional berth.

"I'm proud of those guys, I'm proud of those seniors. They've been in a tough spot for the last two months and they battled," Davis said. "They faced adversity and at the end of the day, at some point, many years down the road, they're going to forget every win and loss. At some point they won't remember if they won 11, 12 or 15; but the adversity they've gone through and how to overcome that -- that's a life lesson that they'll be able to take forever."