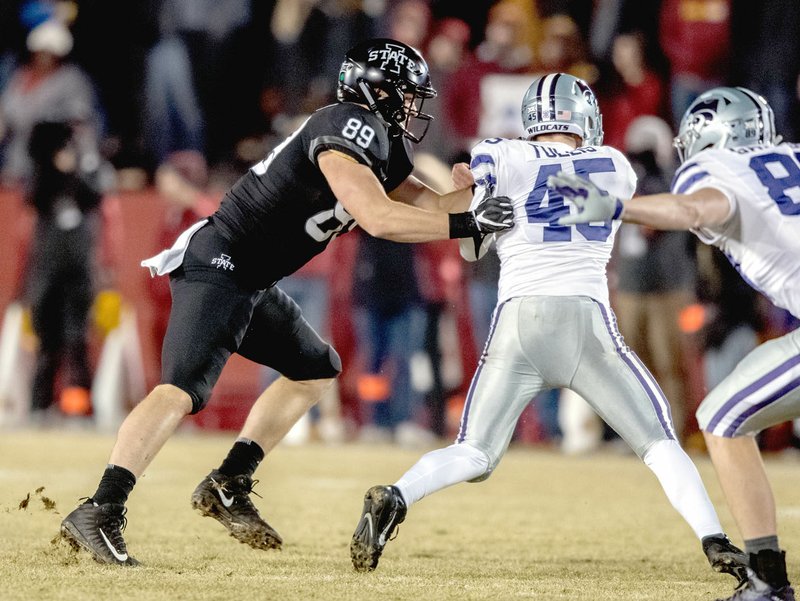 PRAIRIE GROVE -- Playing tackle instead of tight end? Where to play college football? These questions were directed at Dylan Soehner, a 2016 Prairie Grove graduate, three years ago.

Soehner successfully answered those questions and many others including those who scoffed telling him he would never play a down of college football as a tight end.

Played in all 13 games, primarily on special teams and power running packages.

"A couple of people thought that. I'm not going to mention any names, but everybody has something in their life or in their game where they can use that as motivation," Soehner said. "There are teammates and players all over the country, who can take something like that and use it to their own advantage. People are entitled to their own opinion, but at the end of the day it just makes me better."

Recruited by Illinois, Purdue and Missouri as well as Arkansas, which wanted him to play on the offensive line; Soehner never thought about attending Iowa State until coaching changes expanded his horizons.

Golesh worked for Illinois at the time, and shortly thereafter was hired at Iowa State to join head coach Matt Campbell. Both were assistants on Toledo's staff from 2009-11. Golesh convinced Iowa State to make an offer. Soehner scheduled a visit and committed the day he left.

Soehner has done well on the football field. He worked his way into the lineup beginning with a committment to generating an impact on special teams.

"I started off on special teams and then my role on offense continued to grow," Soehner said. "You do whatever you can do to help the team."

Seeing increased playing time on offense as a blocking tight end, the 6-7, 271-pound Soehner was part of one of the greatest wins in Iowa State history. The Cyclones trailed No. 3 Oklahoma, 24-13, at halftime on Oct. 7, 2017 before roaring back to stun the Sooners with quarterback Kyle Kempt throwing for 343 yards while completing 18-of-24 passes and three touchdowns. The 38-31 victory became Iowa State's first-ever against a top-five team on the road. Kempt threw touchdown passes in the second half of 46, 54, and 57 yards.

"It was the first game I actually played meaningful reps on offense," Soehner said. "Up to that point I had been playing a lot on special teams. I was actually playing in the heat of the moment -- it was something. When the clock hits zero and it's dead silent, then our fans start screaming for us, it was just incredible."

Two weeks later Soehner and the Cyclones capitalized on another opportunity, notching a huge 14-7 win over previously undefeated Texas Christian University to run their season record to 6-2.

Iowa State wrapped up the 2017 season posting a win over a nationally-ranked opponent taking a 21-20 victory over No. 19 Memphis in the Liberty Bowl.

On the road at T. Boone Pickens Stadium, Soehner and Iowa State knocked off No. 25 Oklahoma State (4-2, 1-2 Big 12) by a 48-42 score getting 140 yards from its ground game on Oct. 6, 2018. The rushing yardage opened things up for a five-touchdown performance by true freshman quarterback Brock Purdy as the Cyclones improved to 2-3 overall and 1-2 in Big 12 play.

In front of a home crowd of 54,430, Soehner helped Iowa State achieve a 42-28 win over Kansas State on Nov. 24, 2018. His blocking was part of a 156-yard rushing effort by the Cyclones in winning the highest scoring game in the series history. The teams combed for 80 points. According to Iowa State athletics, the previous high was 77 points (55-22) in Iowa State's win way back in 1972.

Soehner won the Jim Doran Outstanding Special Teams Player award at Iowa State for 2018. The award is named after a Cyclone legend, who went on to the NFL, playing 11 years with the Detroit Lions and Dallas Cowboys.

Soehner is making headway in the classroom as well. He was named First-Team Academic All-Big 12 football for 2018.

"I had some things I needed to catch up on so I took a heavy load," he said. "Then I had a little sickness during the time of spring ball going in."

The hard work he put in to maintain a GPA of better than 3.7 didn't go unnoticed.

Taking AP classes in high school enabled Soehner to accelerate his education. He will graduate with a Bachelor's degree in Finance in December leaving him with another season of elgiblity to pursue a Masters.

For now, he is enjoying the ride ever mindful of where he comes from as a small-town kid playing NCAA Division I football.

"It's definitely an experience. It's humbling. You grow up as a kid and watch it on TV. Those guys are your role models. It puts you in a position where you influence others. You become a role model to them. It's just a good feeling to know that you've become a role model."

Soehner is expected to take on an increased role in the Cyclone offense in 2019.