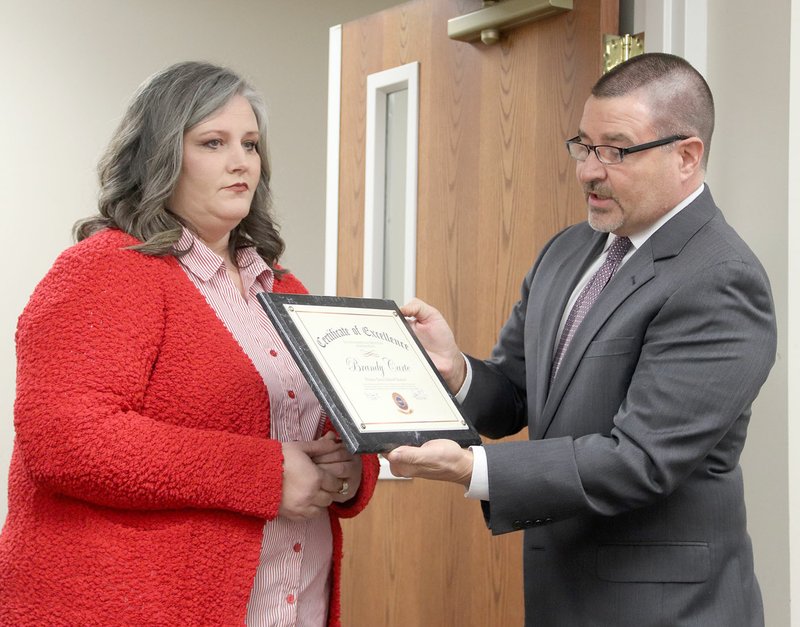 PRAIRIE GROVE -- Parents of a Prairie Grove student credit the quick response from staff with saving their daughter's life during an emergency episode at the elementary school.

Brandy Carte, special education teacher at Prairie Grove Elementary School, used the RAVE Alert App on her cellphone to notify administrators, teachers and first responders about the medical emergency through an instant text sent out with the push of a button.

Within seconds, staff responded to the emergency, along with Prairie Grove police. The app also notifies 911 dispatchers, and they soon were on the phone getting more information about the situation and sending out help.

J.P. French, director of strategic accounts with RAVE Mobile Safety, recognized Carte for her quick action during the February School Board meeting.

French told School Board members the RAVE App worked just as intended by sending out an instant text to multiple people so the appropriate ones can respond.

"Prairie Grove is leading Northwest Arkansas in this," French said. "The time and effort you are putting into school safety and collaboration with other agencies, you are bringing everyone together."

The instant notification to staff on site allows trained personnel to respond immediately to any emergency needs. They can administer help until an ambulance arrives, French said.

Carte thanked the school for having the RAVE App available for teachers and described what happened that day to board members and others at the meeting.

She said Kinsley, a first-grader, has had seizure activity in the past and teachers and staff monitor her. That day, the girl had a seizure and did not have a pulse.

"We've prepared for this but we hope not to have to use it," Carte said.

Students already in the classroom were immediately taken from the room. There were two paraprofessionals in the room. Nikki Rochier started chest compressions, and Rebecca Bowling ran to get the school's defibrillator machine.

School nurse Danielle Randolph took over CPR until Kinsley was stable and nurse Kelli Myers searched for a pulse. Principal Brenda Clark took over the phone call with 911 dispatch.

Staff continued to administer medical assistance until Central EMS arrived. Carte said the school's maintenance department made it possible so that Central EMS could easily get the gurney from the building to the ambulance.

Lt. David Faulk, school resource officer, was there within 30 seconds and he coordinated with first responders, EMTs and other staff in the police department to block off intersections to stop traffic for the ambulance leaving town.

Carte said she believes the student's life was saved "thanks to the RAVE panic button and all the help and the Lord above."

The student and her parents, Luke and Caroline, had hoped to be at the board meeting but instead asked Carte to read a letter on their behalf. In the letter, the family expressed their appreciation to each person who showed up to help.

"You've shown so much love and care for our Kinsley," the letter said. "You saved her life."

The letter indicated the young girl has started a new seizure medication which seems to be helping her immensely.

"She is a smiling, happy girl again," the parents wrote. "We know that things could change again but we know she's in a safe environment at Prairie Grove Elementary School. Thank you for saving her life."