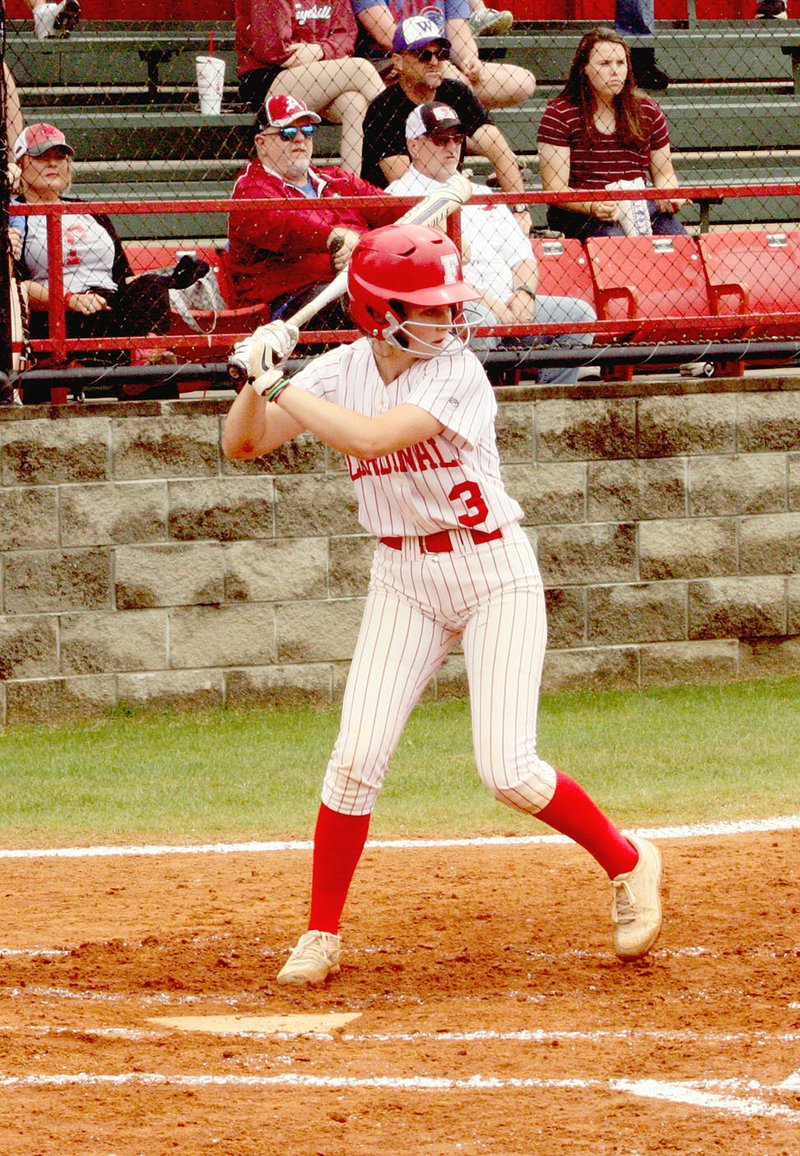 MARK HUMPHREY ENTERPRISE-LEADER Farmington sophomore Shayley Treat went 1-for-4 with a double and an RBI while scoring a run in the Lady Cardinals' 11-5 State 4A softball tournament quarterfinal victory over De Queen Friday.

FARMINGTON -- The Lady Cardinals (24-2) avoided the fate of two other No. 1 seeds on Friday by defeating De Queen, 11-5, to reach the state semifinals for the second consecutive season.

Friday proved a tough outing for two other Regional champions, yet a good day for teams from the 4A North, all of whom except for No. 2 seed Gravette advanced.

A much anticipated meeting between Farmington and Gravette in the State 4A semifinals never materialized one week after Farmington pulled a 5-4 win out of the fire scoring a pair of runs in the bottom of the sixth against the Lady Lions to win the 4A North Regional championship, 5-4, on May 5.

The Lady Cardinals enjoyed a first-round bye Thursday with an opportunity to scout their opponent in the quarterfinals, which became De Queen (18-6) when the Lady Leopards routed Jonesboro Westside 11-1.

De Queen pounded Jonesboro Westside for 11 hits, getting 3 from starting pitcher Lex Taylor. Westside's Scout Harrison hit a solo home run in the top of the first inning but managed just 3 hits for the game.

Farmington defeated De Queen, 8-3, in the semifinal of the 2018 State 5A Softball tournament. The Lady Leopards jumped out to a 3-1 lead in the first inning of that game and stayed ahead until the fourth inning. De Queen graduated just 3 players from its 2018 State 5A team and figured to be a quality opponent.

This time Farmington started well against De Queen holding the Lady Leopards scoreless in the top of the first, then senior Eliana Landwehr (2-for-4) led off with a single. Kally Stout also got on base before the tournament's second rain delay led to an extended delay which lasted more than an hour.

Once play resumed Grace Boatright singled, driving in a run to kickstart the Lady Cardinals as Farmington took an early 2-0 lead. The Lady Cardinals were consistent, scoring a pair of runs in each of the first three innings creating a 6-0 lead. De Queen, which like Farmington, Magnolia, and Morrilton, dropped in classification after reaching the 5A State tournament in 2018, rallied with three runs in the top of the fifth reducing Farminton's lead to 6-3.

The Lady Cardinals answered with two runs in the fifth and three in the sixth while allowing De Queen one run in both the sixth and seventh innings.

Farmington once again flexed its offensive firepower smashing 11 hits topped by Alyssa Reed and Madison Parrish each blasting a 2-run homer. Reed went yard in the second and Parrish homered in the sixth.

McKenzi Bogan (20-2) earned the win for the Lady Cardinals. Bogan went the distance, allowing 5 runs on 8 hits and striking out two. Taylor took the loss for De Queen. She threw 6 innings, allowing 11 runs on 11 hits with 4 strike-outs.

Paige Anderson (2-for-4) contributed 2 RBIs for the Lady Cardinals. Madison Runnels went 2-for-3 to lead De Queen which had 8 hits.

Last season Farmington faced Magnolia in the first-round of the State 5A Softball tournament at Harrison Parks & Recreation Complex and held on for a 5-4 victory after giving up 4 runs in the top of the fourth. Had the Lady Cardinals not found a way to overtake Gravette, which led 4-3 midway through the sixth inning in the 4A North Regional title bout, they would have squared off again this season against Magnolia in 4A.

As it was the 2019 4A State Softball tournament bracket pitted Gravette against Magnolia Thursday. The Lady Panthers lurked on the verge of breaking the game open, getting 5 hits early capped by Cara Taylor's RBI triple to take a 1-0 lead in the top of the third.

Magnolia had 6 hits but only over the final four innings.

Print Headline: Lady Cardinals Only No. 1 Seed To Advance Friday