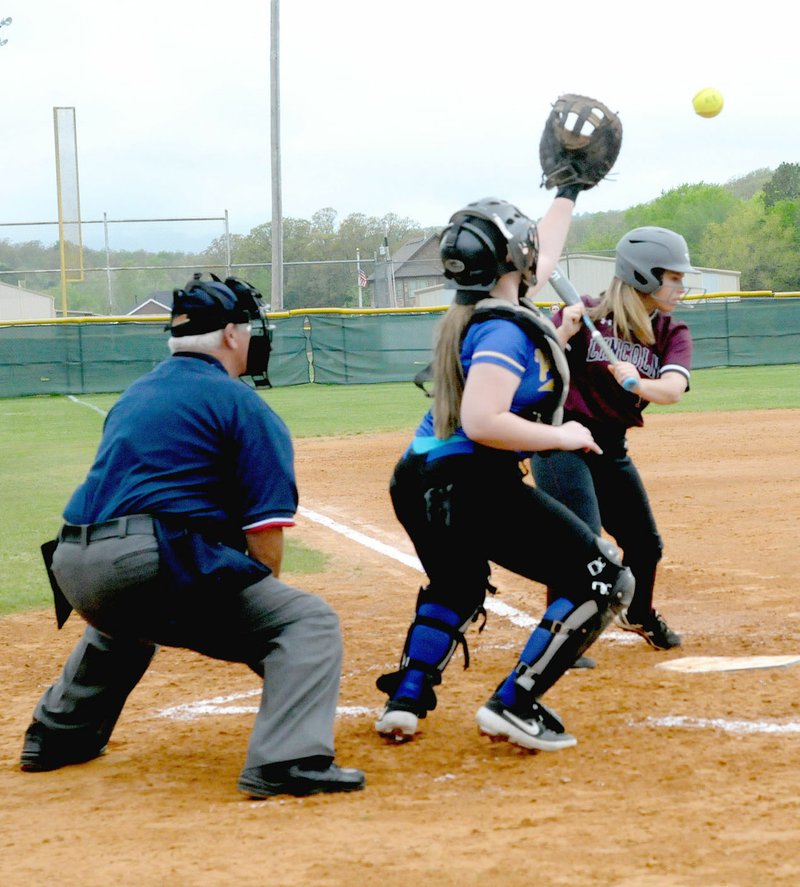 MARK HUMPHREY ENTERPRISE-LEADER Lincoln sophomore Tiana Anderson takes a high ball during the Lady Wolves' district tournament 17-7 win over Cedarville in the 3A-1 West softball competition at Greenland April 24. The speedster scored on an error with the bases loaded giving her 4 RBIs although she didn't get credit for a hit on the spectacular play which resembled a grand-slam in-the-park home run.

GREENLAND -- Lincoln held off Cedarville, 17-7, in a game of ebbs and flows to open District 3A-1 West softball tournament play at Greenland on April 24.

The Lady Wolves pushed a run across in the bottom of the second when junior Shea Woolsey doubled.

Lincoln tacked on 3 more in the third. Junior Kinley Webb led off with a walk and scored on Tiana Anderson's triple. Paige Umberson, who came on in relief in the fourth, helped her cause with the bat, driving in a run with a double.

Sophomore Chloe Dawson drove in the fourth run with a double, but umpires exercised the look-back rule which cost Lincoln an out and a runner was left stranded at second when Woolsey struck out swinging.

That frustration was compounded by a Cedarville rally which forged a 4-4 tie in the top of the fourth.

The rally began with Linsey Riley's leadoff in-the-park home run when she drove the ball past second base.

Sophomore starter Paisley Curtis (3 innings, 4 runs, 2 hits, 3 walks, 1 strike-out) walked the next two batters and gave up a 2-run single into center field to Kirsten Garner. At that juncture, Lincoln coach Beau Collins pulled her in favor of Umberson.

The Lady Pirates capitalized on Lincoln's miscues. A fly ball was not caught in shallow left center, becoming an RBI double and an error allowed the tying run to score.

Undaunted, Lincoln answered with 5 runs in the bottom of the fourth, earning separation on the scoreboard by a 9-4 margin.

The Lady Wolves produced an in-the-park error-powered grand-slam home run of their own off the bat of Anderson, whose smash down the first base line enabled Lincoln to double Cedarville's score at 8-4. The speedy Anderson raced around the bases, hesitating at third then took off for home at the urging of Collins to complete a spectacular, daring athletic feat set up by walks from Curtis and Webb sandwiched around Katie Jones' single.

Anderson (1-for-4) wasn't officially credited with a hit, but she did rack up 5 RBIs during the contest including 4 when she scored on a bases-clearing error. Lady Wolves coach Beau Collins attributed the score to Anderson focusing on getting around the bases.

"It was a great hit that went into the corner. Luckily enough she didn't want to watch her ball. She took care of her base running, got to third base and we got lucky, a bad throw, and she took advantage of it," Collins said.

Morgan Coker-Gage drove in a run when she reached on an error giving Lincoln a 5-run cushion.

Cedarville promptly trimmed that to 9-7 with 3 runs in the top of the fifth, but Lincoln shut the door by exploding for an 8-run fifth to notch a run-rule 17-7 victory.

The Lady Wolves confounded Cedarville sophomore starter Katey Oden, extending the lead to 11-7 and loading the bases with one out. Coke-Gage drew a walk to score a run, then Chloe Dawson stroked a single into left center, pushing Lincoln's lead to 13-7.

Having two pitchers became a key for Lincoln with Collins noting Cedarville didn't have a second pitcher.

"We've had those two girls. They've worked hard all year long and it's nice to be able to get here in tournament play where you know you're going to play tomorrow if you win and be able to pitch one pitcher for the most of it and then be able to bring one in for just a couple of innings so we'll have one fresh tomorrow," Collins said. "They've seen a lot of up and down games this year. They (Cedarville) started hitting the first pitcher (Curtis) big, got some girls on, roll in a second pitcher (Umberson), throw their timing off a little bit, girls don't get their heads down, they just keep taking care of business and it worked out for them."

Woolsey nearly hit into a double play popping up to shortstop, but a throw to second was dropped keeping Lincoln alive with two outs. Curtis came up and took ball-one, which became a passed ball scoring a run and moving two more runners into scoring position. Curtis contributed an infield single, scoring two separate runs in her at-bat, pushing the Lady Wolves into position to claim a run-rule victory with a 15-7 advantage.

Jones took ball-one, another passed ball scoring a run and bringing the game-winning run to third. The game ended with a Lincoln runner sliding under an attempted tag by the pitcher on a high throw to the plate.