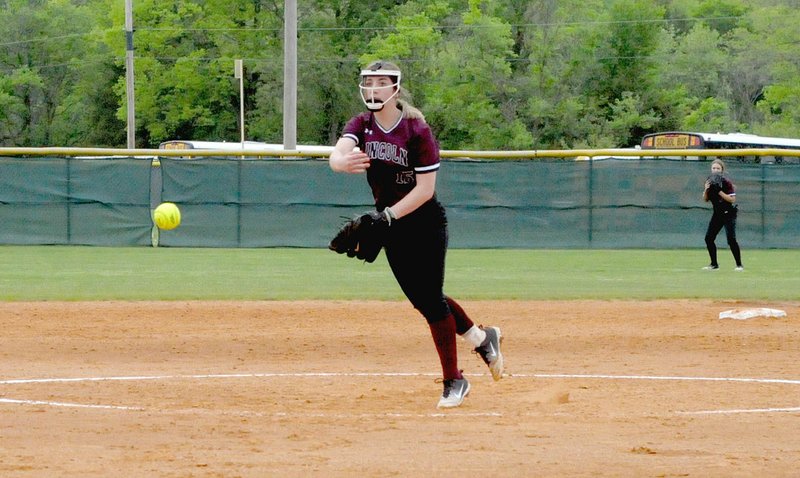 MARK HUMPHREY ENTERPRISE-LEADER Lincoln sophomore Paige Umberson took the loss for Lincoln in the Lady Wolves' district tournament 5-4 loss to Waldron in the 3A-1 West softball competition at Greenland April 15. She pitched 4 innings, allowing 5 runs on 6 hits while issuing 3 walks and striking out 6 batters.

GREENLAND -- Ironically, Lincoln's 2019 softball season ended with the exact same losing score as baseball with both squads suffering a 5-4 loss in postseason play -- albeit weeks apart.

On April 25, the Lady Wolves gave up 5 runs to Waldron (13-8, 8-2) in the fifth, the only inning in which the Lady Bulldogs managed to score, leaving Lincoln one win short of qualifying for Regionals.

Just like that the complexion of the game changed as Lincoln went from leading to trailing 5-3.

The Lady Bulldogs only managed 6 hits in 25 at-bats against Lincoln for an average of .240 at the plate, but the hits they did get produced runs.

Senior infielder Mackinzie Callahan went 3-for-3 with a double and an RBI to lead Waldron. Sophomore Ashton Young walked three times and smacked a double, driving in a run with her only hit (1-for-1) of the game.

Young earned the win for Waldron pitching all 7 innings. She allowed 4 runs on 8 hits with 2 walks and 5 strike-outs.

Freshman Alex Torres went 3-for-3, tripling twice with an RBI and scoring one run for the Lady Wolves. She drew a walk in her other plate appearance getting on base all four opportunities.