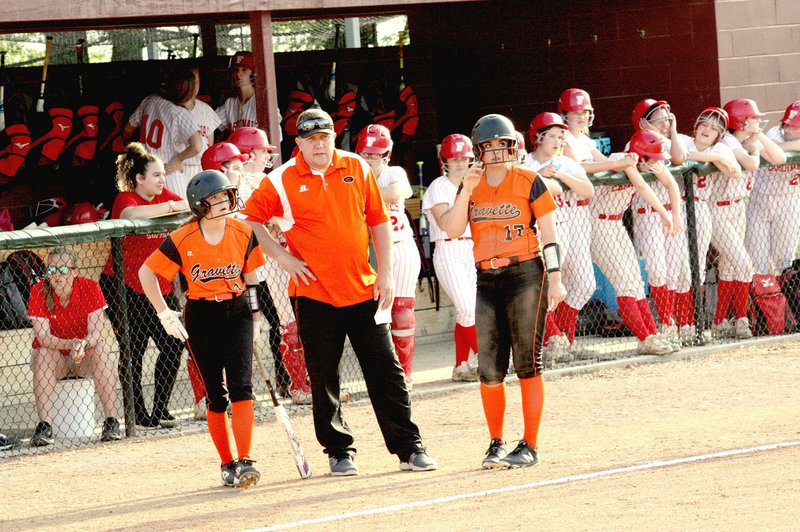 MARK HUMPHREY ENTERPRISE-LEADER Gravette softball coach Taos Jones talks to a pair of base runners, senior Sumer Kaba (left) and sophomore Taylor Snow, during a break in the action with the Farmington dugout behind him. Long-time rivals, Farmington and Gravette, renewed conference and classification competition this season with the Lady Cardinals rejoining the 4A-1 after five seasons as a member of the 5A West. After battling in the District 4A-1 and 4A North Regional championships, a much anticipated showdown between the teams at state didn't materialize with the Lady Lions losing 2-0 to Brookland in the quarterfinals.

FARMINGTON -- Brookland's shutout 2-0 defeat of Gravette Friday changed the complexion of the 2019 State 4A Softball tournament for Farmington, which had to come from behind in three of four wins against the Lady Lions this season.

On March 16, Farmington needed Paige Anderson's 2-run homer in the fourth to edge Gravette, 3-2, in the semifinals of the Farmington Invitational. Ten days later, the Lady Lions licked their chops hungering for another shot at the Lady Cardinals at home only to have Farmington rush 7 runs across the plate in its first at-bat, taking control in the top of the first inning. Gravette would get 4 runs in the bottom of the sixth, but come up short, 10-7.

After giving up 2 runs in the top of the first inning in an April 26 District 4A-1 championship played at Gentry, Gravette held Farmington scoreless for five straight innings and captured a 6-2 lead with 5 runs in the top of the fifth. Two runs walked in with the bases loaded and 2 more scored on an error. Farmington turned the tables in the bottom of the sixth scoring 3 runs on 5 hits to load the bases with two outs. The tying run walked in and Shayley Treat knocked a grand-slam home run out of the ballpark to account for half of Farmington's 8-run sixth with the Lady Cardinals prevailing, 10-6.

Getting past Gravette was even tougher for the Lady Cardinals playing at home in the finals of the 4A North Regional tournament May 5.

Farmington pushed two runs across in the bottom of the sixth inning in the midst of controversy to defeat the Lady Lions 5-4.

Trailing 4-3 with two runners aboard, Grace Boatright drove a grounder past Gravette's first baseman. The ball hit a base runner, but umpires ruled the Gravette infielder touched the ball, which allowed two Farmington runs to score.

On Friday, the Lady Bearcats limited a hard-hitting Gravette squad to a 6-for-27 performance at the plate. Brookland managed just 5 hits against Gravette pitchers, Cally Kildow and Bailey Elmore, but those hits were timely.

Brookland (20-6) assumed a 1-0 lead in the bottom of the first with Makenzie McMellon leading off with a walk, then scoring on a double by Caitlin McClain, who had 3 of the Lady Bearcats' hits. Brookland got a second run in the bottom of the second when McClain was hit by a pitch and was plated by Gracie Davis' single.

Caldow took the loss for Gravette, allowing 2 runs on 4 hits in 5 innings while striking out 6 batters and issuing a pair of walks. Gravette finished 17-9 with 4 of those losses to Farmington.

Print Headline: No Rematch With Gravette For Lady Cardinals