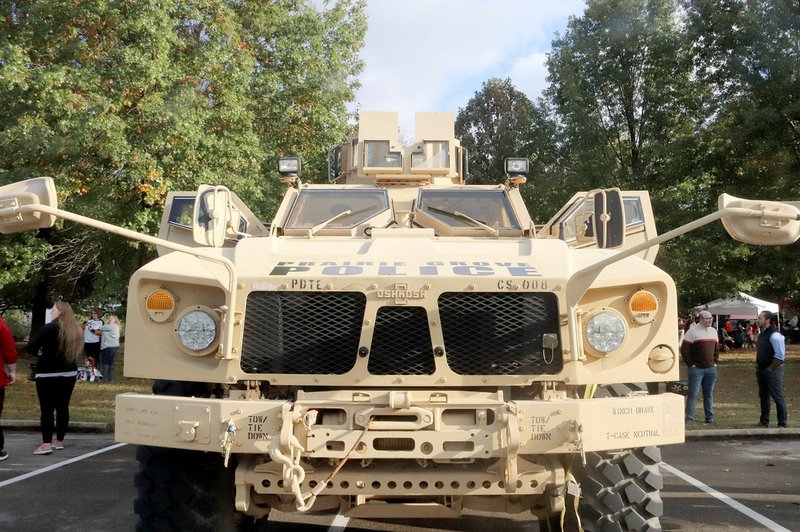 LYNN KUTTER ENTERPRISE-LEADER Prairie Grove Police Department has a military all-terrain vehicle now at its disposal to respond to natural disasters and major crisis situations. The military vehicle came from the U.S. Department of Defense through the 1033 Program.

PRAIRIE GROVE -- A used military all-terrain vehicle, priced new at $675,000, is now a part of the fleet for Prairie Grove Police Department.

Prairie Grove was able to get the military vehicle through the federal 1033 Program. This program allows law enforcement agencies to apply to receive excess supplies and equipment from the U.S. Department of Defense.

Prairie Grove's vehicle is an Oshkosh Defense MRAP All-Terrain Vehicle. According to the Oshkosh website, the vehicle has durable drivetrain for mud, snow, sand and deep water conditions. It can traverse 60% grades and 30% side slopes. It also has a 70% off-road duty cycle.

The vehicle is fully armored and has a single compartment crew capsule.

Chief Chris Workman said police will use the military vehicle for natural disasters and crisis situations, such as an active shooter on site.

The vehicle also will be available on call for other law enforcement departments, as needed.

The Defense Department had a certain number of these vehicles and Prairie Grove submitted a request for one, Workman said. This part of the country is considered a high intensity region for drugs, and such areas are given a preference for military vehicles, he said.

Workman said the armored vehicle would not be used on routine calls. However, the vehicle can withstand any type of rifle rounds and could be deployed for active shooter calls.

In addition, he said the vehicle is able to travel over logs and other debris and could be used to respond to a major natural disaster. Bella Vista Police Department has a M-ATV and recently used it to remove trees from the roads, Workman said.

Prairie Grove did not have to pay any costs for the vehicle and picked it up from Red River Army Depot in Texarkana, Texas. The vehicle belongs to the U.S. government and Prairie Grove is not committed to keep it, Workman said.

Three officers with the police department received 8 hours of training on the vehicle.and will be qualified to use the vehicle during emergencies.

Workman said he hopes Prairie Grove will not need the armored car but his philosophy is that it's better to have it and not need it than to need one and not have it.

He noted Prairie Grove has called Springdale's SWAT team for assistance at times and it takes an hour for the vehicle to show up. This way, Prairie Grove will have a vehicle on site, if necessary, Workman said.

Prairie Grove has accumulated other equipment and supplies through the 1022 Program other the years, including an emergency response vehicle with medical supplies and other equipment, a pickup truck, two off-road vehicles and many defibrillators.