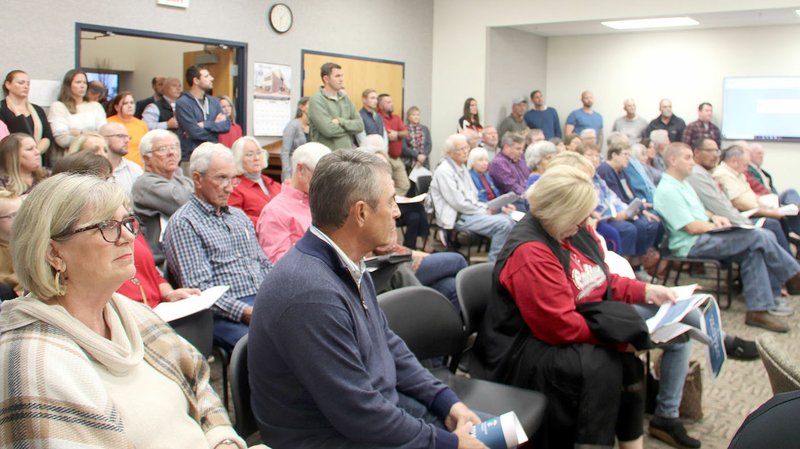 LYNN KUTTER ENTERPRISE-LEADER A record crowd attended the Oct. 21 meeting for Farmington Planning Commission. Almost everyone was there because of a request to rezone land from R-1 to R-3.

FARMINGTON -- A record crowd of more than 100 people attended the Planning Commission meeting last week, almost all there because of a request to rezone about 120 acres of land from R-1 to R-3, which allows single-family homes on smaller lots with zero lot lines.

Bates & Associates engineering firm of Fayetteville submitted a request to rezone the property on behalf of Mark Marquess with Riverwood Homes. According to the application, the developer was requesting an R-3 zone "to reduce the minimum lot width from 75 feet to 70 feet."

The land is located east of Folsom Elementary School, south of Countryside Drive and west of Farmington's ballpark and Briar Hill Street.

After some discussion and a recommendation from the commission, Marguess agreed to withdraw his request and said he would submit a new proposal to rezone the land for the first phase from R-1 to a Planned Unit Development zoning designation. This possibly will be on the commission's Nov. 25 agenda.

Marquess addressed the commission Oct. 28, saying he was planning a development called The Grove at Engle's Mill with a blend of large, medium and smaller-sized homes to create a community of young professionals, families with children all the way up to grandparents who were moving to live closer to their grandchildren.

Marquess said The Grove would be similar to his Sloanbrooke development in Fayetteville on Broyles Street. This subdivision also has three sizes of homes.

At first, Marquess asked the commission if he could only just rezone the land for Phase 1A and Phase 1B to R-3 and then come back later and ask to rezone the rest of the land as the subdivision develops.

Phase 1A would be located on the north side of Twin Falls. This phase, Marquess said, would include 85-foot-wide lots and have larger homes (2,300-3,000 square feet) to provide a buffer around Twin Falls.

Phase 1B would be located east of Folsom Elementary School and back up to Countryside Drive and Briar Hill. This section would have smaller homes with 1,350 to 1,700 square feet on smaller lots.

Marquess brought drawings, renderings and a handout of what The Grove would look like. According to the handout, the subdivision when finished would have ponds, fountains, green space, small community parks, and a connection to Folsom Elementary School, Farmington Sports Park and Farmington High School.

Commissioner Chad Ball stopped him, however, explaining that the commission could not consider Marguess' plans for the development, only the rezoning request.

"We look at the worse case scenario," Ball said. "Not how it's going to look."

Chairman Robert Mann agreed, telling Marquess, "This is nice but there's no guarantee that's going in there."

Another commissioner, Judy Horne, added that by rezoning the land to R-3, the developer could put in eight units per acre. Horne said she drove through Riverwood's Sloanbrooke subdivision in Fayetteville and to her, it looked "really crowded."

Ball suggested that Marquess change the request from an R-3 zone to a Planned Unit Development zone. This would allow the developer and city to communicate on the project and then bring it to the Planning Commission, Ball said.

"I like the PUD," Wilson said. "That approach is good to me."

Farmington City Council approved PUDs as a new zoning designation in September. For this zone, the city and developer have an agreement on how the land will be used and once the agreement is finalized and approved, the plan cannot be changed.

Mann advised Marquess that if the Commission turned down his request to rezone the land to R-3, he would have to wait a year to come back and submit the request again.

Following that discussion, Marquess said he still wanted to hear any concerns from people at the meeting about his development and his rezoning request.

Mann opened the floor for public comment and about 12 people addressed the commission with questions and concerns. Concerns included drainage issues, how the development would affect property values of adjoining subdivisions, more traffic, parking on the streets and infrastructure. Another concern was if the houses would turn into rental property.

Gary Noe, who lives on Countryside Drive, noted that two smaller homes would be built behind him that would each be worth one-half the price of his home.

The Sloanbrooke subdivision in Fayetteville is not adjacent to any other pre-existing housing developments. That's why it works there, Noe said. Farmington is different because the proposed subdivision has neighborhoods around it, he noted.

Tommy Johnson of Driftwood Drive in Twin Falls said his plea to the Planning Commission was that they look into the future.

"If you do this, what will this look like in 20 years, in 10 years," Johnson said. "Drive around and look at what has evolved in 10 years. Really evaluate this from a long-term plan of what we want Farmington to evolve into and look like. We want to go to the future and still be the nice place that Farmington is."

Johnson's comments drew applause from those at the meeting.

Another resident from Twin Falls, Janette Houser, said she did not want The Grove to be accessible through Twin Falls subdivision for safety reasons.

"My biggest concern is traffic coming through Twin Falls," Houser said. "Keep our neighborhood in its entirety. It's not a pass through."

She said she supported Marquess' plans if The Grove was not connected to Twin Falls.

After closing the floor to public comment, several commissioners made a few statements.

Commissioner Gerry Harris pointed out that not everyone wants a two-acre lot and a yard to maintain and mow. Harris said she also has dealt with change in her neighborhood. She lives on Bethel Blacktop Road and remembers children playing in the street. Now, Harris said, children can't do that anymore because of the traffic.

Mann added that growth is going to happen.

"We all live here, too. We don't want our property values to drop either. Sometimes we don't get 100 percent of what we want."

Commissioner Jay Moore said the commission realizes the area between Folsom Elementary School and the high school will be the next to be developed.

Wilson urged the people in Twin Falls to be open to development. When Twin Falls was proposed, people were opposed to a housing development going into that pasture, Wilson said.

"Now you're sitting here because of Twin Falls," Wilson said. "Try to look at both sides."

Marquess addressed the concern about the houses becoming rental property. Less than 15 percent of Sloanbrooke subdivision is being used as rental property, Marquess said. He pointed out that Sloanbrooke is on the University of Arkansas' bus route. He does not believe Farmington's development will be used by college students, he said.