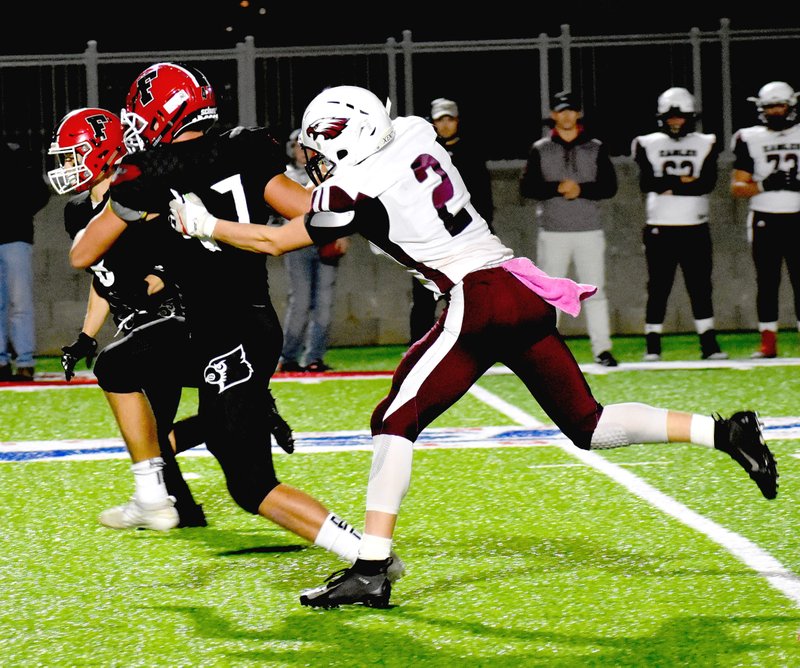 "Offensively, we played really well most of the time, but turnovers killed any chance we had to win the game," said Farmington coach Mike Adams. "We rushed for 279 yards and threw for 125 yards, but we turned the ball over on downs at their 15-yard line, fumbled at their 17 and fumbled at their 35."

Farmington got solid performances on offense from Josh Stettmeier, who ran for a season-high 178 yards on 30 carries, while Drew Sturgeon scored 3 touchdowns on a 6-yard run, 21-yard run and 47-yard reception.

Wasted opportunities hurt the Cardinals in the first half, especially late in the second quarter. Trailing 14-7 with more than two minutes left the Cardinals recovered a Morrilton fumble and had first-and-10 in Morrilton territory at the 47.

The Cardinals could not only cash in, but they gave Morrilton a chance to increase its lead when Chris Mourot recovered a fumble by Farmington.

Morrilton scored with Reggie Toney catching a 13-yard pass from Jacolby Criswell. Gerardo Zuniga's kick gave the Devil Dogs a 21-7 halftime lead. Earlier Farmington turned the ball over on downs at the Morrilton 15 in the first period and fumbled away another possession early in the second.

As the half wore down, Cade Halbrook intercepted a Farmington pass and Morrilton took possession on Farmington's 46, but couldn't score.

Morrilton took the second half kickoff and scored quickly on Quincy Clemons' 36-yard reception of a Criswell pass less than a minute into the third quarter.

Farmington answered with Sturgeon running the ball in from 6 yards out to cut the deficit to 28-14. Criswell connected with runningback Xaviar Clemons on a 47-yard score, but Farmington came right back with another Sturgeon rushing touchdown, this time from 21 yards.

The game then got out of hand due to turnovers. Halbrook recovered a Farmington fumble setting up the Devil Dogs with a first down at Farmington's 33. Morrilton took advantage of the short field with Lamar Wofford catching a 17-yard touchdown pass from Criswell. Zuniga's PAT kick gave the host team a 49-21 lead going into the fourth quarter.

"Defensively, we gave up too many big plays in the passing game. Three times we had them in third and long situations and they were able to get behind us for touchdowns. Their overall advantage in team speed was too much for us to overcome," Adams said while noting the Cardinals ran almost 75 offensive plays compared to 50 something for Morrilton.

Six of Morrilton's plays were for 40 yards or more, four of those went for touchdowns.

Each team scored once in the fourth period. Farmington tacked on six points to its output on Jaden Schrader's 19-yard run followed by Sturgeon's PAT kick in the first minute of the fourth.

Morrilton went back to the air again with Toney scoring his second receiving touchdown on an 11-yard pass from Criswell to make the final, 56-28, in favor of Morrilton. Farmington closes out the regular season on the road at Harrison Friday.