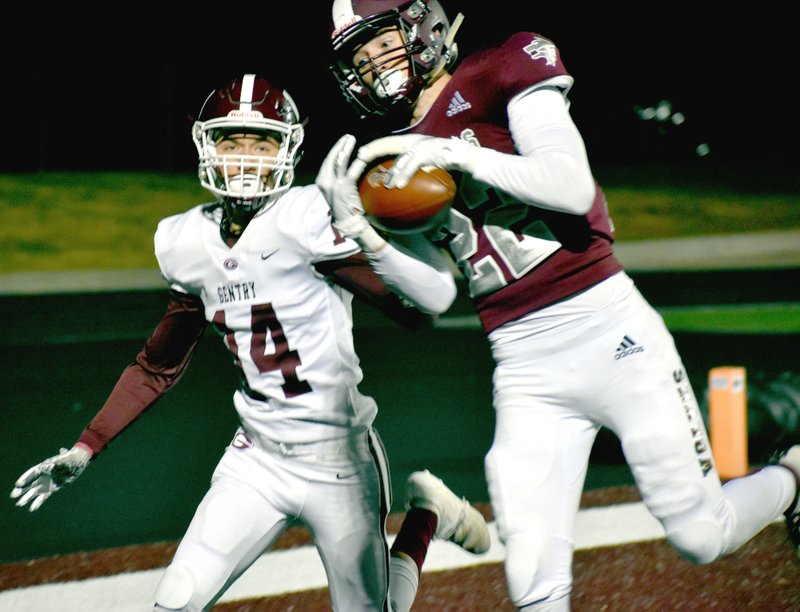 MARK HUMPHREY ENTERPRISE-LEADER Lincoln senior Blake Arnold catches a pass in front of Gentry defensive back Isaiah Lopez. Arnold had receptions of 19, 16, 6 and an 8-yard touchdown catch. The Wolves lost 34-13 to the Pioneers. Lincoln goes to Prairie Grove Friday to finish out the regular season. The Wolves (5-4, 2-4 4A-1) need a victory to accomplish their first back-to-back winning seasons in school history. Last season Lincoln went 8-3.

The Pioneers rushed for 137 yards on 28 carries averaging 4.9-yards-per-carry, but it was quarterback Brandon Atwood, who completed 12-of-21 passes for 226 yards and 3 touchdowns making the difference.

Three plays after Beau Tomblin's interception, Atwood hit him deep for a 49-yard touchdown giving Gentry a 34-13 lead which effectively sealed the game with 10 seconds remaining in the third quarter. The pair hooked up on a 42-yard scoring pass on the opening possession of the third quarter. Tomblin made 4 catches for 110 yards while Zach Jarnagan had 6 catches for 110 yards.

Lincoln came up a yard short although completing a pass on fourth down on the ensuing series. Tomblin pushed the receiver out-of-bounds. Taking over at midfield Gentry used 8 plays before scoring again on Atwood's 1-yard scramble after dropping back and reversing field. Atwood was Gentry's best runner, gaining 75 yards on 11 rushes,

"We thought we'd be able to run the ball a little bit better in the first half and we weren't able to do that, turned the ball over, got some things off the film in there at halftime and made a couple adjustments, decided to throw some post routes, go deep, and hit it a couple of times. That was a good adjustment for us," said Gentry coach Paul Ernest.

The banged-up Wolves already without junior quarterback Tyler Brewer (6-4, 201) as well as tight end/middle linebacker Levi Wright (6-5, 225) were forced to play their fourth quarterback, sophomore Brodey Bowen, in the first quarter and switch personnel around on defense.

Lincoln appeared poised to take an early lead with Sellers rushing for a 7-yard gain to convert third-and-2. The Wolves had a first down at Gentry's 26, but were flagged for offensive pass interference on an incomplete throw. With the yardage marked off Lincoln faced first-and-25 from the 41 and never recovered. On second down Avellaneda scrambled and was sandwiched between a trio of Pioneer defenders: Seiren Reding, Anthony Hernandez, and Garrison Jackson.

Avellaneda left the game and Lincoln punted from the Pioneer 39.

"When Noe got hurt right there at the beginning of the game, it really took away a lot of what we could do. We had to condense the playbook down. He tried to throw the ball off it. He hurt his right leg. He's trying to throw off his back foot," Harrison said. "There wasn't much we could do there."

Lincoln's defense and a short punt return gave the Wolves prime field position to start a second series on offense from the Pioneer 45. With Bowen calling signals Lincoln moved the ball 27 yards before Bowen was dropped for a 3-yard loss on a keeper. Avellaneda checked back in and found Daytin Davis on back-to-back completions bringing up fourth-and-1 from the Pioneer 8. Sellers converted the first down by grinding out 2 tough yards, but Zach Jarnagan intercepted him in the end zone.

Lincoln eventually grabbed a 7-0 lead set up by its defense.

Following the touchback the Wolves anticipated throws to the sideline. Tanner Barnum nearly came away with a "pick six" batting down a pass to the left. On second-and-10 from the Lincoln 20, Blake Arnold jumped a route to the right and returned the ball to the Pioneer nine.

Sellers churned his way into the end zone and the hobbled Avellaneda, who limped throughout the remainder of the contest, kicked the PAT.

An onside kick attempt backfired on the Wolves and Gentry marched 47 yards in five plays. Atwood ripped off 34 yards on a run, then passed to Tomblin for a 5-yard touchdown. A 2-point try failed leaving Lincoln with a 7-6 lead.

Sophomore William Pyburn recovered a Lincoln fumble. Atwood had a touchdown called back by a blindside block which led to a turnover on downs. Charlie Reams intercepted a Lincoln pass and made a long runback positioning Gentry for Pyburn's 1-yard touchdown plunge. Atwood passed to Tomblin for a 2-point conversion and 14-7 Gentry lead.

"When you lose those two guys that was big. Losing Noe also made us have to move two people on the defensive side of the ball and then when Noe got hurt Christian went in. When Christian got hurt we had to move somebody else on the defensive side of the ball," Harrison said. "Right there before halftime we scored there. We threw a screen pass and Christian Sellers got hurt. He tried to come back out in the second half and he just couldn't go."

Matthew Sheridan took the bulk of the carries for Lincoln in the second half.

From Harrison's persepective Gentry's execution during a crucial span of the game factored into Lincoln's loss. The Wolves finished with 218 yards of total offense and suffered 3 interceptions.

"They did a better job in the second quarter than we did and I don't want to blame injuries at all, but at the same time we just have so many guys that are hurt, playing hurt and doing the best they can and we have them just taped up as best we can and they're trying hard for us," Harrison said. "When Noe went down in the first quarter it took our playbook and pretty much cut it in half. There wasn't much we could do."

Lincoln's Davis may have set a school record with a booming 59-yard punt that rolled dead at the Pioneer 11 with just over a minute left in the fourth. Davis had to take over punting duties due to the absence of Wright.

Both coaches left preparing for week 10 in rivalry matchups.