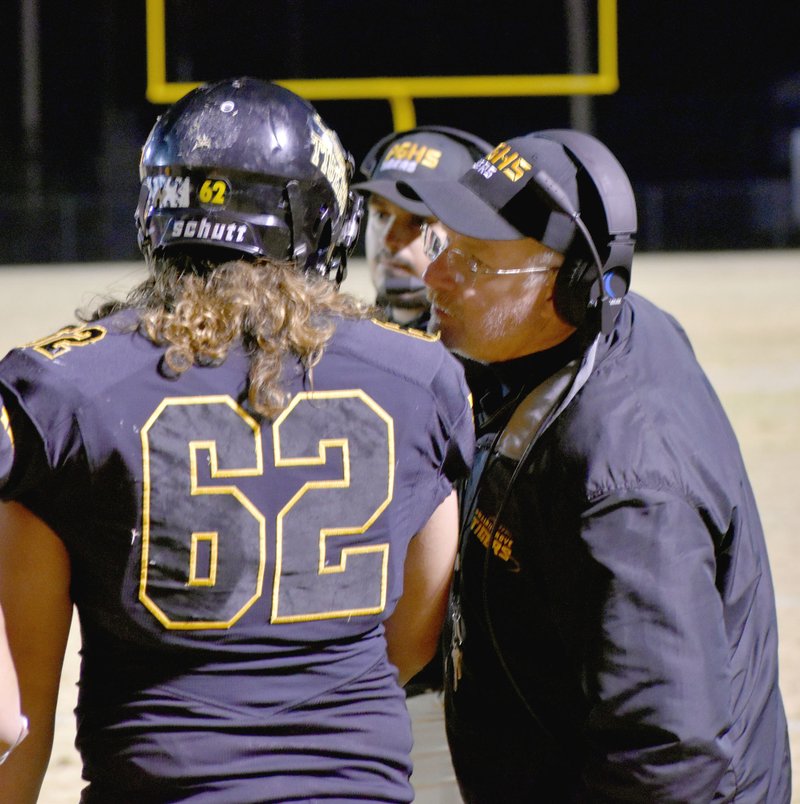 PRAIRIE GROVE -- Knox Laird completed 7-of-11 passes, some under duress, connecting on a 10-yard touchdown to Cordelle Whetsell to give the Tigers some breathing room late in the third.

Prairie Grove's running game accounted for 311 yards with the special teams and defense doing the rest as the team gained separation on the scoredboard in the second half during a 46-21 road win at Berryville Friday.

Coming into the contest Prairie Grove senior Jared Harger said the coaches were preparing the team for the best.

"We just got to put our trust in them and trust in our teammates and hope everything works out for the best, and I believe it will," Harger said.

The Tiger offense asserted itself mixing eight runs and two passes, the second of which Knox Laird completed for the 10-yard touchdown. The PAT kick was no good, but the third quarter clock was down to 1:20 and the Tigers held a 27-14 advantage.

Sensing time slipping away Berryville took a chance and went for it on fourth-and-4 from its own 28. Carter Scates, Knox Laird, and Keiandre Hobbs met a run behind right guard and closed the door causing a turnover on downs.

Prairie Grove took over at the Bobcat 30 and wasted no time getting the ball in the end zone on Hobbs' 21-yard run up the middle. A bad snap led to a pass attempt and the conversion failed.

Berryville reeled off a pair of runs that were better than 10 yards, but lost the handle as the ballcarrier neared midfield. The ball was scooped up by Ethan Beason at the Tiger 49. He circled around and returned the fumble to the Bobcat 48.

Asher Sam ran for 18 yards converting second-and-six after a penalty. Whetsell avoided a tackle in the backfield and added 13 more yards on a wingback carry. Semrad ran the same play for a 7-yard touchdown. Another snafu on the snap caused a failed conversion pass but the Tigers had the game in hand with a 39-14 lead.

Henry raced 84 yards for a touchdown for Berryville. Mojica kicked the PAT trimming the margin to 39-21.

Prairie Grove then went 71 yards in 7 plays to ice the game getting a key play from Foster Layman's 33-yard dash. The Tigers scored on a 4-yard touchdown run. Paytin Higgins got off a kick this time and drilled the ball between the uprights and Prairie Grove made the 46-21 margin hold up for the duration of the contest.

Berryville's special teams didn't execute well on the opening kickoff falling on the ball at their own 17. This led to a three-and-out allowing Prairie Grove to set the tone for the game on defense. Layman and a teammate stuffed a run to the wide side of the field for a 6-yard loss and Hayden Black, back in action coming off an injury, helped shut down another run up the middle.

Berryville punted from the shadow of its own goal line and didn't get off a good kick with pressure causing the punt to travel a net of 23 yards.

The Tigers wound up with a short field sending their offense out at the Berryville 41. Harger helped overcome a penalty by running for 16 yards. Prairie Grove set up a play-action pass but the throw was dropped. On third down Tiger quarterback Knox Laird hit Layman for 20 yards bringing up first-and-goal at the Bobcat three. Berryville defended a sideline throw caught by Whetsell and dropped him for a 2-yard loss so the Tigers did what they do best running the ball up the gut with Layman scoring from 5 yards out. Higgins' booted the PAT and the Tigers captured a 7-0 lead.

Berryville picked up two rushing first downs on the next series, but couldn't complete a pass and opted to punt on fourth-and-4 from its own 47. Whetsell fielded the ball at the 24 going left and didn't stop until he was pushed out-of-bounds 21 yards later at the 45 leaving Berryville with a net of 8 yards on the punt.

After two runs Knox Laird went aerial to a wide-open Cade Grant for a big gain of 33 yards on a vertical route. Whetsell capped the drive by running in a wingback reverse for an 8-yard touchdown. Higgins kicked the point-after and Prairie Grove assumed a 14-0 lead.

Two sacks by Scates sandwiched around an incompletion ended the next Berryville drive.

Prairie Grove once more improved its field position with a punt return, and began at Berryville's 47, but lost the ball on a fumble giving the Bobcats possession at midfield.

The turnover proved costly. Instead of cashing in on a chance to go up by three scores, Berryville inserted a big sophomore back Jaeden Tanksley (5-10, 210), who rumbled 44 yards to the Tiger 3 before he was dragged down from behind. Bobcat senior Brett Parsons scored on the next play. Armando Mojica kicked the PAT cutting Prairie Grove's lead in half at 14-7 early in the second quarter.

Prairie Grove special teams continued to excel with Marshall Montgomery calling for a fair catch on a sky kick at the Tiger 38. Sensing a potential shift of momentum the Tiger offense responded with field general Knox Laird completing 2-of-2 passes while under pressure for 16 yards to Landon Semrad and leading the Tigers on a 7-play, 62-yard march. Grant took a pitch and turned the corner on a 17-yard jaunt to paydirt. Higgins added the extra-point kick and Prairie Grove had a 21-7 lead.

That didn't last however, as Berryville answered with a 13-play, 75-yard drive getting big plays from Dominic Henry taking a pitch 23 yards on third-and-15, and a J.D. Smith to Jarrett Stringer (6-1 260) 22-yard pass play on second-and-7. Prairie Grove stopped a pair of runs, but on third-and-goal from the one Smith scored on a quarterback sneak.

"Mostly, we just got to keep up the morale with the team and make sure nobody drops their head," Harger said, noting if the Tigers have a bad play, they got to keep in mind the next play is the most important.

Prairie Grove coach Danny Abshier moved up to 198 career victories with the win.