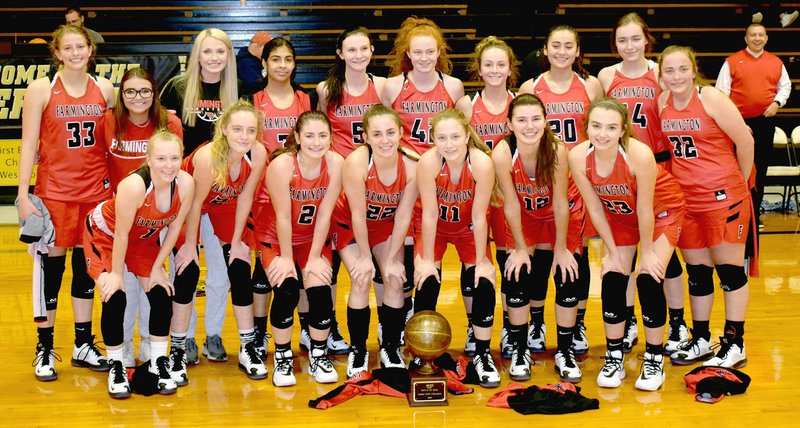 MARK HUMPHREY ENTERPRISE-LEADER The Farmington girls basketball team started the 2019-2020 season the way they hope to finish it -- winning a tournament. The Lady Cardinals defeated Rogers Heritage, 60-41, last Wednesday; followed by a 73-34 thrashing of Marshall in Thursday's semifinals; then knocked off Siloam Springs, 52-22, in the championship game Saturday to win the Duel of the Dome tournament hosted by West Fork.

WEST FORK -- Farmington's girls basketball team began the 2019-2020 season the way they hope to finish by winning a tournament and bringing home a trophy with Saturday's 52-22 win.

"That was something our coaching staff has kind of talked about. This four games in four days stretch. It could end up with a situation potentially like that in the state tournament, and at that point it's kind of survive and advance," said Farmington coach Brad Johnson. "There's a mental toughness, kind of an edge you have to play with in order to do that and for us to come out here at the very beginning and to experience that on the front end of the season I think that this could pay dividends for us down the road."

Siloam Springs got a first hand look at how difficult Farmington made scoring for opponents throughout the Duel at the Dome tournament hosted by West Fork illustrated by the Lady Panthers' 6-for-24 shooting through the first three quarters. The Lady Panthers only made seven field goals for the game.

Siloam Springs wasn't bad either, at least on the defensive end of the court. Farmington senior point-guard Makenna Vanzant, who signed with Central Missouri Friday, never got to the free throw line and didn't make a 3-pointer. She was held to eight points, but made her mark passing the ball. Vanzant frequently found teammate Tori Kersey going to the bucket. Kersey finished with a team-high 21 points, almost as many as the Lady Panthers had as a team total.

In spite of the loss, Siloam Springs coach Tim Rippy was happy with the defensive effort.

"They're a very good team and probably one of the better teams in 4A and we knew that coming in," Rippy said. "We knew that it was going to be a challenge and I was proud of our kids. I thought we played extremely hard. Our defensive goal was to try to hold them to 50 and they wind up getting 52 on us, but we stayed focused on that and trying to execute our assignments. Hopefully, it's a game we can learn a lot from."

Brad Johnson was also thrilled with his team's defensive intensity while noting Farmington played tournament games at West Fork Wednesday, Thursday and Saturday with a home game at Cardinal Arena Friday. The Lady Cardinals dominated all four contests with tremendous defense and consistent rebounding which fueled their running game at times.

"Outstanding defensive effort, I can't say enough about our kids right now. They're buying in on the defensive end. They're playing really tough. They're playing together as a unit. They're taking a lot of pride in our field goal percentage defense. They're taking a lot of pride in rebounding," Johnson said. "It's a lot of fun to watch. You know defense can cure a lot of ills. You may have games where you don't shoot it particularly well and I don't think we shot it great tonight, but defensively what we did do is we played lockdown for three quarters really, really good and we've done that really four straight days."

Farmington led 14-7 after one quarter and 25-10 at the half. Siloam Springs could get no closer in the third and trailed 43-17 as the fourth got underway. A night after scorching the nets for 32 points against Providence Trinity Johnson rang up three more trifectas and scored 9 points while Audrey Culpepper added 8.

"It was a fun tournament. It was really good for our kids and I'm happy to come away with a couple of wins and move on and learn from this first week of the season," Rippy said. "Our goal is to be as good as we can be and continue to improve."