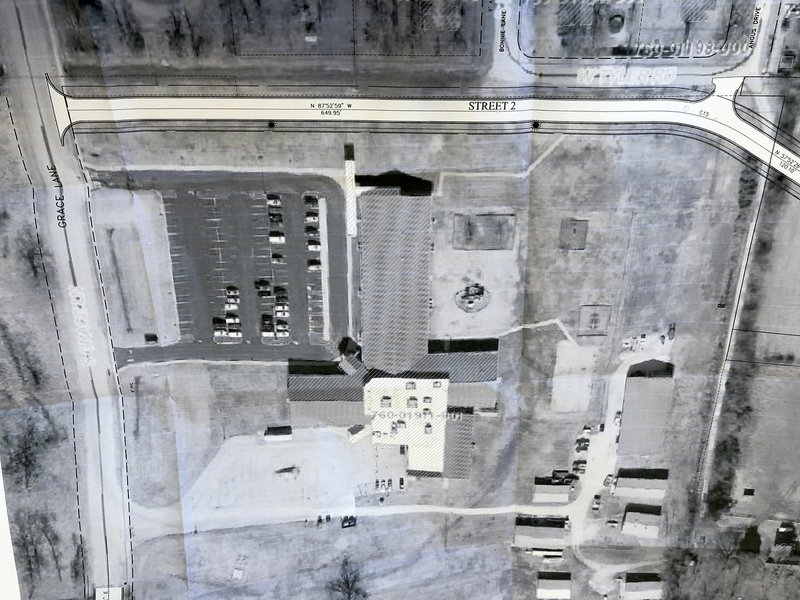 LYNN KUTTER ENTERPRISE-LEADER This photo of a picture from Google Earth shows where a developer proposes to build a new street along the northern boundary of Folsom Elementary School to provide access to a new subdivision that would be located behind the school. The proposed street is at the top of the photo and goes from Grace Lane and ties into Angus Lane before veering slightly to the south.

FARMINGTON -- A developer proposing to build a housing subdivision behind Folsom Elementary School asked about the possibility last week of getting one-half acre of school property to build a new road that would be located north of the school.

Mark Marquess with Riverwood Homes and project engineer, Geoffrey Bates with Bates and Associates, made the request at the Nov. 19 Farmington School Board meeting.

Marquess is proposing a development called The Grove at Engle's Mill, which would be built in several phases. His request to have the land rezoned for the development has not been approved yet by the Farmington Planning Commission or Farmington City Council.

Bates said the city is requiring a second access into Phase 1 of the proposed subdivision. Phase 1 would have 76 single-family lots and be located east of Folsom and behind Countryside Drive and Briar Hill Street.

The new street would go from Grace Lane across the northern length of the school property to connect to the proposed subdivision. This street also would tie into Angus Lane.

School Board member Jeff Oxford asked why Angus Lane couldn't be used as the second access, and Bates replied that the city thought Angus Lane, which is a more narrow street, would not be able to handle the increased traffic.

Bryan Law, superintendent of schools, said Folsom already has a lot of traffic in the mornings and afternoons and new development in the area is going to add to that traffic.

"There's going to be a lot of houses over there," Oxford said. "The more ins and outs you can have the better."

Marguess and Law discussed some ways the developer could help the school in lieu of paying money for the land. Marquess said he would be interested in dedicating a nearby portion of wooded area as a park for the elementary school.

Law said the school needs a better, decorative fence behind the Folsom's playground. Another idea, Law said, is to install a parking or turnaround area off the new street that could be used as another place to dismiss Folsom students at the end of the day.

Marguess said he thought all those were possibilities and asked the school to decide which options it wanted.

Bates asked board members if they were open to the idea of giving the land to the developer for the street. He said he needed to know so he could continue with the subdivision's preliminary plat, which will probably go to the Planning Commission in December.

Oxford replied that he believed the school and developer could come up with something that would work.

In other action Nov. 18, the board agreed to rent six more classrooms in the annex building to Northwest Arkansas Education Service Cooperative.

It also approved a Christmas bonus for all employees. Certified, full-time staff will receive a $1,000 bonus and classified employees will receive a 2.43% bonus. The maximum is $1,000 and the minimum is $250. Total cost for the bonuses is $244,000, not including benefits.