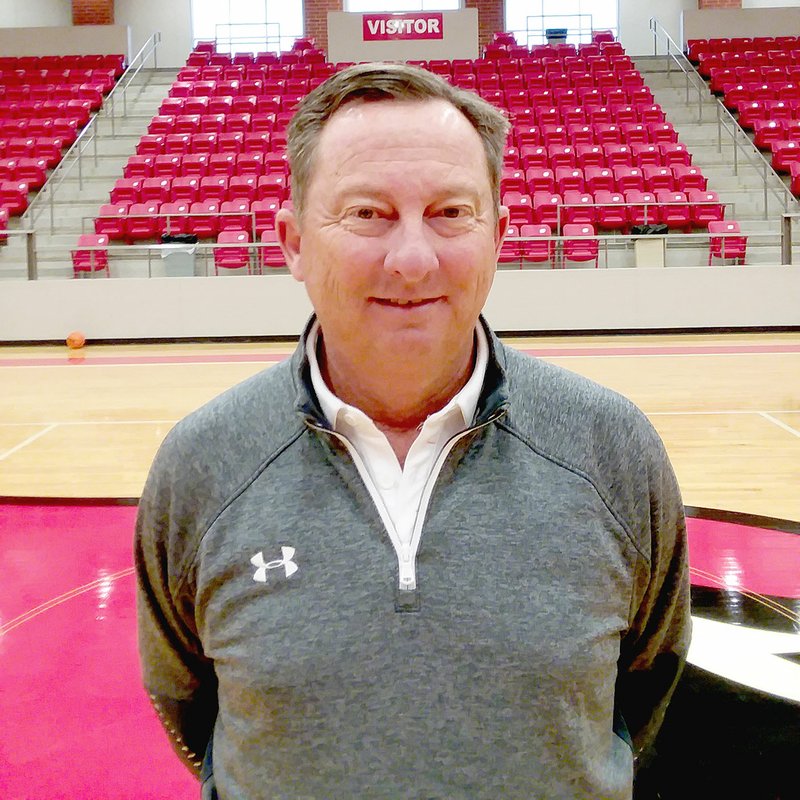 MARK HUMPHREY ENTERPRISE-LEADER/Farmington Athletic Director Brad Blew submitted his resignation during a Nov. 18 school board meeting. The resignation will take effect on Feb. 28, 2020.

FARMINGTON -- The high profile that Farmington athletics enjoys across the region and state emerges from diligent work done by outgoing athletic director Brad Blew, often behind the scenes.

Blew submitted his resignation and it was accepted during a Nov. 18 school board meeting. The resignation goes into effect Feb. 28, 2020.

Thirty-four years working in Farmington schools as a teacher, coach and more recently the last 14 years as athletic director has filled Blew with a lot of memories. Tops on the list are winning the Class 3A girls basketball state championship in 2004 five seasons before he retired from coaching in 2009 with a 464-162 record.

Blew became athletic director in 2006 and continues to achieve the original vision formatted in his mind when he took the job. Blew sought to empower success.

"I wanted to give our teams the resources at the time to run first class facilities, and I wanted our teams and this position that I currently hold to be very visible not only within our school and our town but across northwest Arkansas and statewide," Blew said.

Maximizing his effectiveness as athletic director, Blew involved himself at every level from daily interaction with coaches and building principals to attending conference meetings and maintaining regular contact with the Arkansas Activities Association.

His coaching background taught him perception is based upon strength of schedule, a realization he leveraged to Farmington's advantage as he promoted Cardinal athletics.

"I think we've had, you know, a lot of success and great history across this athletic program," Blew said. "When you have this job it's certainly what you want for all your teams."

There is no substitute for maintaining an active presence. Blew has never been too busy or distracted, aware Farmington stands to benefit from participation. He's taken an intentional approach promoting Cardinal athletics on the scene.

Whenever a student-athlete accepts a college scholarship -- and the list at Farmington in recent years seems endless -- Blew shows up without fanfare as he did Nov. 16 when senior Makenna Vanzant signed with Central Missouri for basketball.

Blew applauds while coaches make speeches and introduce the student-athlete and their families. He doesn't have to say anything. His presence serves as its own endorsement. Yet, those who tap into his expertise draw out keen insights.

"Coaching was centered around kids and one of the barometers of that was about how either your kids improved throughout the season or how successful they were in the won-loss column and how far they went each year," Blew said. "In this job you don't work with the kids as much. You work for them."

For now, Blew isn't divulging any specifics about his future plans, explaining some things he can't talk about yet. He won't become a sports junkie camped out in front of a TV watching ESPN all day, however.

"I've been here for an awfully long time and people have been so good to me," Blew said. "I may not be working here, but I am going to be working."

Blew arrived in the Farmington School District as a 22-year-old fresh out of college. He coached girls basketball at Farmington from 1986 to 2009 and led the Lady Cardinals to the 2004 State 3A championship. He accumulated more than 450 career wins and coached two State Runner-up teams, reaching the state semifinals on eight occasions.

The Fayetteville native found a home, and still clearly enjoys the community.

"I will be around. I came here as a very young guy and now I've got wrinkles and I've got gray hair and all that stuff but I'm still way too young to retire," Blew said. "I think really what I'm trying to do is determine what I will be doing for the next 10 years of my life."