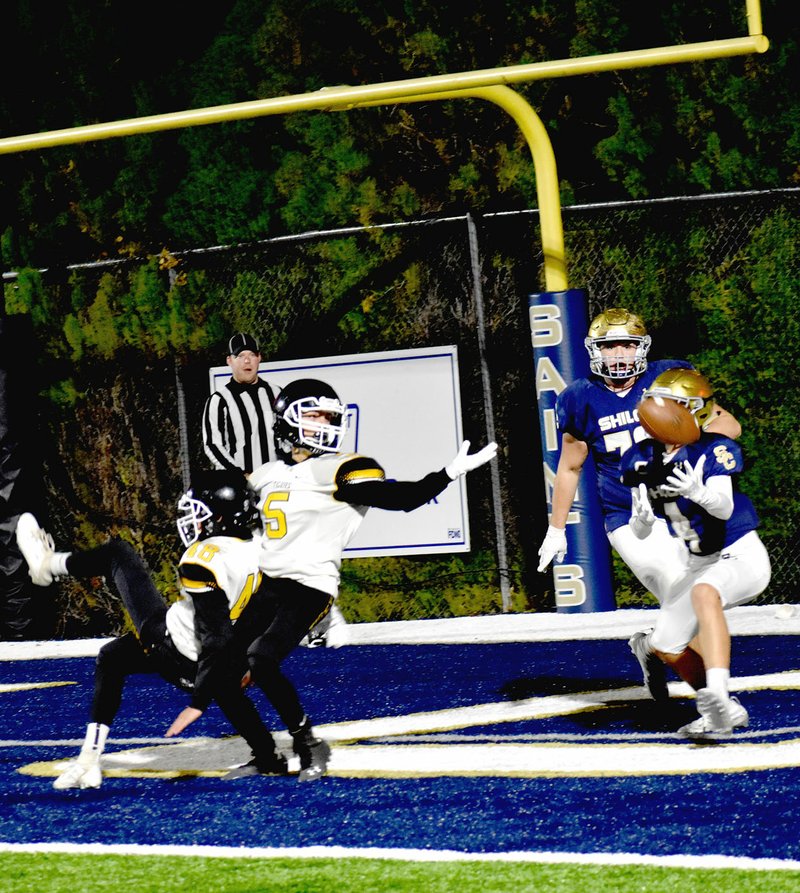 MARK HUMPHREY ENTERPRISE-LEADER Prairie Grove defensive backs Camden Patterson (left) and Tate Benoit fall off-balance after leaping to tip a pass that wound up caught in the end zone. That was the story of the game as the junior Saints defeated the junior Tigers, 32-8, on Thursday, Nov. 7 to win the 4A-1 junior high football conference championship.

"We beat them pretty handily last time (36-0 on Oct. 3) and they were thinking, 'Oh, we got these guys,' you know," Elder said. "That's part of the mentality of a 14-15-year-old kid right there. They had that mentality so that was definitely tough."

The junior Saints claimed the conference title at Champions Stadium, but not without controversy.

Shiloh Christian recovered an onside kick to start the game from the junior Tiger 48. After penetrating the red zone, Prairie Grove dug in and circumstances seemed favorable that the junior Tigers might make a goal line stand but they didn't. This was a pattern that would repeat more times than the snake-bit junior Tigers would care to remember.

Prairie Grove stopped running plays on first-and-goal from the five and on second-and-goal from the two. Shiloh Christian, however, scored on a trick play by lining up offensive tackle Thomas Reece wearing jersey No. 79 in the backfield, then sending him in motion to his right. Shiloh Christian quarterback Eli Wisdom took the snap and threw a touchdown pass to a wide-open Reece, who slipped uncovered into a short pass route.

Elder was forced to expend a time-out to argue the legality of the play with Reece wearing jersey No. 79, a lineman's number, and coming out of the backfield in motion.

That was a time-out he could have utilized late in the first half, but the entire officiating crew one by one told Elder and the Prairie Grove staff they weren't aware of any such rule changes for junior high. Nor did they give Elder his time-out back. That sequence irritated Prairie Grove fans, who voiced their displeasure to the officials.

Wisdom fumbled while trying to run for 2-points and the conversion failed.

Shiloh Christian led 6-0 at the end of the first quarter.

Temperatures dipped into the mid-thirties and things never took an upswing for Prairie Grove. Junior Saints' fans let them know they weren't in Prairie Grove anymore. The typically potent offense came in averaging 29.4 points-per-game, but couldn't sustain a drive although quarterback Conner Hubbs completed a 9-yard pass to Rhett Marrell to pick up a first down in Shiloh Christian territory at the 42 before turning the ball over on downs at Shiloh Christian's 35.

In the second period, a fumble, a sack of Wisdom by Erick Bartholomew, and a solid play by Marrell shedding a block, going low and wrapping up Wisdom by the legs on a scramble put the junior Saints in fourth-and-goal from the 18.

Shiloh switched quarterbacks inserting Bodie Neal and split Wisdom out as a wide receiver. A junior Tiger defensive back saw the ball coming and tipped it, but Wisdom came up with the catch anyway to score on a pass. An ineligible receiver downfield erased a 2-point conversion and Wisdom was tackled short of the goal line on the retry from the 8 so Shiloh Christian settled for a 12-0 lead.

The junior Saints actually kicked off this time instead of attempting an onside kick and Ethan Miller made a good return near midfield. Prairie Grove got back in the game by mounting a 7-play, 51-yard drive that started with a fumbled snap. Miller ran for 19 yards and Rhett Marrell carried for 6 more.

The junior Tigers momentarily dodged another potential turnover by recovering a fumble 4 yards behind the line of scrimmage. Prairie Grove converted third-and-13 with Hubbs passing to tight end Matthew Velasco for an 18-yard touchdown. Marrell ran hard for the conversion and the junior Tigers cut Shiloh Christian's lead to 12-8 with 1:56 remaining in the first half.

Even when Shiloh Christian drew a false start penalty backing them up from third-and-goal at the five and doubling the distance, the junior Saints benefited because the flag stopped the clock with 19.1 seconds to go in the second quarter. On fourth-and-goal Wisdom caught a pass in the end zone that was tipped by a Prairie Grove defender. It was like a flaming missile the junior Tigers couldn't hold onto instantly transformed into an easily catchable, squishy nerf ball as Wisdom clutched it for a touchdown.

Elder acknowledged the junior Saints have some quality athletes who present challenges to defend on the field.

"Oh man, No. 22 (Noah DeJarnatt) running the ball, No. 10 (Wisdom), when he gets it you never know, no telling what he's going to do. We thought we had him bottled up a couple of times and he breaks out that way," Elder said. "The last game we played them we had five or six guys around him getting to him. This time we didn't have that and so he made some big plays for them, and then, of course, you got the two passes in the end zone that we just tipped up to him. How often does it happen like that?"

The time-out used earlier loomed large when Prairie Grove recovered an onside kick at the junior Saints' 47 with 7.1 seconds showing on the second quarter clock. Miller ripped off a 27-yard run, but was tackled as the half expired with Shiloh Christian leading 18-8.

Shiloh Christian added another touchdown on fourth-and-4 on a 13-yard run by Wisdom in the third quarter. He passed to Dax Widger for the 2-point conversion. Wisdom caught a meaningless 88-yard touchdown pass in the fourth quarter then threw an interception as a conversion pass failed.

In the aftermath of a disappointing loss, Elder praised the team for having a good year. The junior Tigers finished 7-3 overall and 6-1 in conference play with their only loss coming in the championship.

"Outstanding year, undefeated in the conference until the championship game so really proud of them. They had a good year, beat Farmington (36-8 on Sept. 5). That was always a good way to start the year," Elder said. "We had a good year, a little bitter taste right here, but we had some good wins this year for sure."