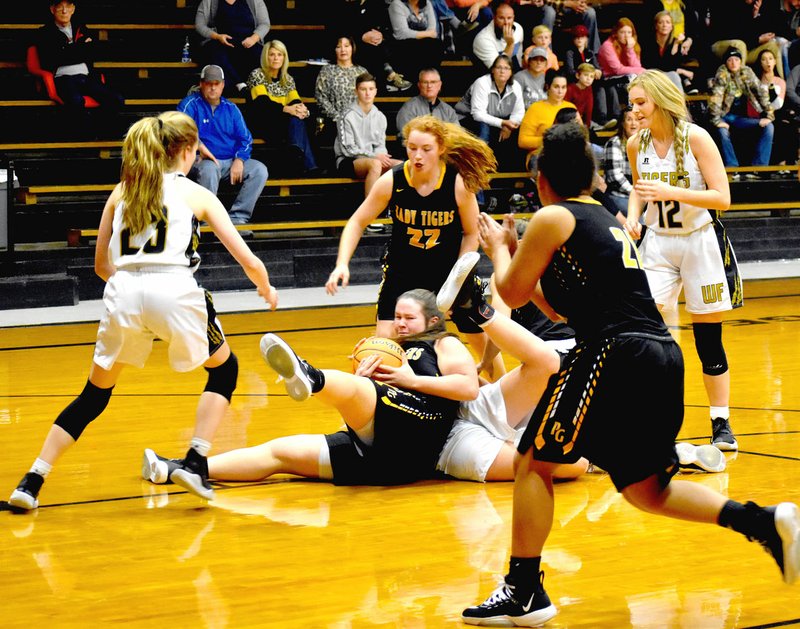 MARK HUMPHREY ENTERPRISE-LEADER Players from both teams converge as Prairie Grove sophomore Zoe Hobbs battles a West Fork player for control of the basketball. West Fork broke away from a 35-35 tie at the end of the third quarter to hand Prairie Grove a 52-42 loss on Thursday, Nov. 14, during the Duel at the Dome girls basketball tournament.

WEST FORK -- A technical foul in the heat of battle changed the complexion of the game and aborted Prairie Grove's comeback with the Lady Tigers losing 52-42 to West Fork.

The game in the consolation bracket of the Duel at the Dome girls basketball tournament hosted by West Fork on Thursday, Nov. 14, became the second loss of the season for a young Prairie Grove team. The technical came on the heels of the third personal whistled against Prairie Grove sophomore Trinity Dobbs. She hit a pair of free throws 16 seconds into the fourth quarter to give Prairie Grove its last lead at 37-35.

A minute later West Fork's Lillian Hauser converted an old-fashioned 3-point play, restoring the home team to the lead. Dobbs' personal foul and ensuing technical became the eighth and ninth team fouls assessed against Prairie Grove in the second half assuring West Fork would shoot the double bonus for the final 5:59.

West Fork made 3-of-4 free throws during the stoppage of play, extending its lead from one to four points at 41-37. The double bonus became a factor with West Fork sealing the win by making 9-of-11 free throws in the fourth quarter. Haley Johnson was 5-of-6 getting her first points since hitting a trio of 3-pointers in the first half.

Although she didn't play for nearly six minutes at the end of the game, Dobbs finished with 15 points, 4 rebounds, 3 assists and 2 steals to lead Prairie Grove. Prairie Grove coach Kevin Froud saw improvement from the day before, especially on the offensive end. The game was nip and tuck through the first half, tied at the end of the first quarter (10-10) with West Fork holding a slight edge, 21-19, at halftime.

In the third, West Fork opened up a 35-27 advantage when Savannah White hit a jump shot. White scored 18 points for West Fork to lead all scorers. Prairie Grove answered with an 8-0 run to tie the game after three quarters (35-35). Logan Meadors scored on a put-back, Arianna Harrel banked in a shot and Olivia Kester hit a turnaround off the backboard.

"We played better tonight than we did last night so it didn't bother me. The effort was there again. There was a lot of things we could work on and get better at, but I felt the girls competed. They played hard. We just didn't make some shots here and there, but, hey, they got ahead of us eight or nine (points). We come back and tied it up, had a close game and the girls kept fighting and playing. That's all you can ask for," Froud said.

Harrel ended a nearly four minute Prairie Grove scoring drought with a pair of free throws, pulling Prairie Grove within 45-39 at the 3:47 mark. Following a West Fork turnover on a charging foul, Torie Price's free throw edged them even closer, but West Fork closed out the contest with a 7-2 run over the last 2:04.

Froud remains hopeful the young team will catch on despite the 10-point loss.

"It will come. They're growing and they're getting better when you're playing pretty much five sophomores right now. Each game we play we just hope to improve and get better," Froud said.

The loss sent Prairie Grove into the seventh place game against tournament Class 3A Greenland, which lost 62-12 to Class 6A Rogers Heritage on Thursday, Nov. 14.