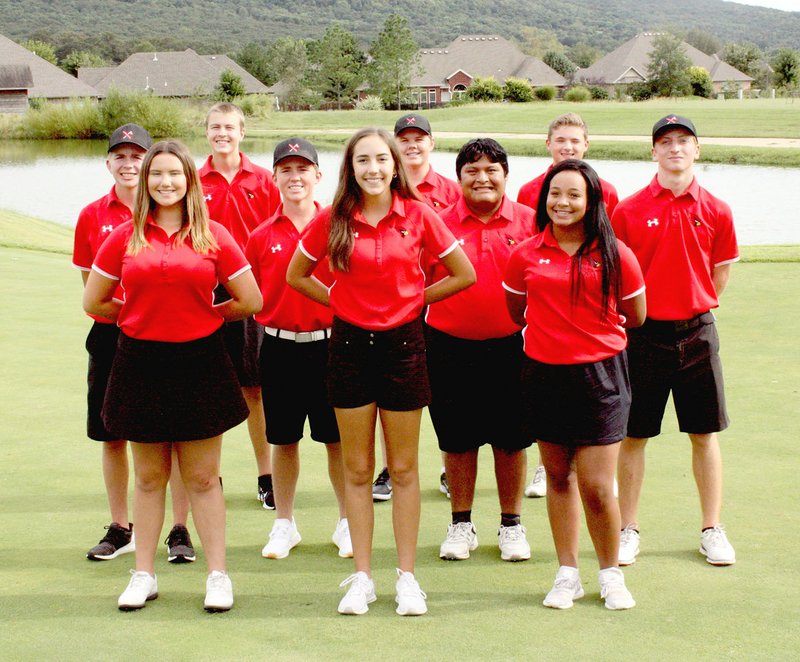 FARMINGTON -- For the second consecutive year Farmington wins the boys 4A-1 Conference golf tournament, held Wednesday, Sept. 25, at Harrison Country Club, despite a long delay the day before.

Farmington coach Randy Osnes likened the experience to a long, team-bonding day from about 8:30 in the morning to about 2:30 in the afternoon sitting at the Harrison Country Club and waiting for tournament officials to call the tournament off for the day.

"With the boys and with the girls we have four sophomore boys, we have two sophomore girls, and a freshman girl. They're just having a good time. They get the opportunity to go out here and play this game they thoroughly enjoy it. They enjoy hanging out with each other so for them it was just a great day and it was another day they had the opportunity to spend with each other," Osnes said.

When the Cardinals went back Wednesday the format was a little different than what they were accustomed to. Teams played the back nine first with boys and then the front nine with the girls and then switched after everybody finished nine instead of all competitors playing one through 18.

South took a mindset going in that he had a really good chance of performing well because he really likes the layout of the course and the team played well during the practice round.

"It was kind of a complicated deal with rain delays and stuff, but the whole plan through the entire thing was just persevering, get out to an early lead and just hang onto that and see how good I could do if I could shoot. It worked out pretty well for me," South said.

Ten strokes separated South from a logjam of second place finishers, all of whom shot a 79 including teammate Lawson, Shiloh Christian's Ben Fowler; and Harrison teammates, Max Payne and Ben Elliott, who along with Nicholas Thiel, 90, enabled the Goblins to place second with a 248 team score.

Bogan said the goal going in was of course to win and the Cardinals did that, coming home with two trophies -- the regular season conference championship and district tournament crown.

"I think as a team we did what we had to do," Bogan said. "We got the win and then going into state. There again, we're going to try to win it and play to the best of our abilities."

Shiloh Christian (271) edged Gravette by a single stroke to claim third place. Jordan Crume and Brant Fowler each shot a 96; while fourth place Gravette (272) got scores of 80, Braxton Muldoon; 95, Keegan Bulza; and 97, Isiah Larson; to sneak past fifth place Pea Ridge (273) with Jared Swope, 86; Levi Schultz, 87; and Seth Hill, 100, on the Blackhawk roster.

"We were rained out Tuesday, but were able to complete 18 (holes) on Wednesday. My team came in sixth, an improvement from last year as they had come in last, eighth out of eight teams," said Prairie Grove coach Rachael Smith.

Landon Lawson noted team expectations increased after the boys proved they could consistently compete in 2018 as freshmen.

"Last year we were just starting out as all freshmen, and it was just sort of more like get our foot in the door and our goal was to make state (as a team)," Lawson said. "This year we know what we can do coming in so we had the goal of winning conference and perform well at state, and just overall a bigger goal."

"Really anything he does is more for tradition and I knew that would carry from softball to golf and he would take a winning tradition and put it in us," Antwine said. "Really, that's all he wants us to do is win and give it our all."

Earlier this season, Antwine hit a hole-in-one while playing No. 9 at the Highlands. Osnes described the feat as "pretty unique."

"I think he hit a wedge in there at about 120 and rolled it in from about 8-feet out. It was pretty awesome to watch," Osnes said. "All the coaches were sitting above nine and getting the opportunity to watch it all in action."

Antwine's mother, Terri Antwine, was sitting above the tee-box and couldn't contain her excitement running over and catching her son in what Osnes called "a pretty good form tackle."

"I mean she did a good job with that," Osnes said, adding, "We're very proud of him. He did a great job."

Antwine wasn't trying to hit a hole-in-one. He concentrated on his approach.

"Honestly, I was just trying to hit it close. I knew the shot I wanted to hit off going into the shot. I had the wind in my face and I just kind of got there and hit it and it was once in a lifetime deal for sure. It was just pretty amazing."

Antwine didn't expect his mom to charge out and wrap him up in a bear hug to celebrate the exploit.

"I didn't know what was going on. I just turned around and my mom was tackling me and it was pretty crazy," Antwine said. "I saw it go in but I did not realize my mom was coming to tackle me. I'll never forget that ever."

South heads into the state tournament aiming to take his game up a notch from a second place individual place in 2018.

"Last year I fell short and finished runner-up, but this year hopefully I'll put a little bit extra practice in and hopefully finish what I started last year getting runner-up," South said, explaining he intends to "actually get it done this year," and win the state medalist title.