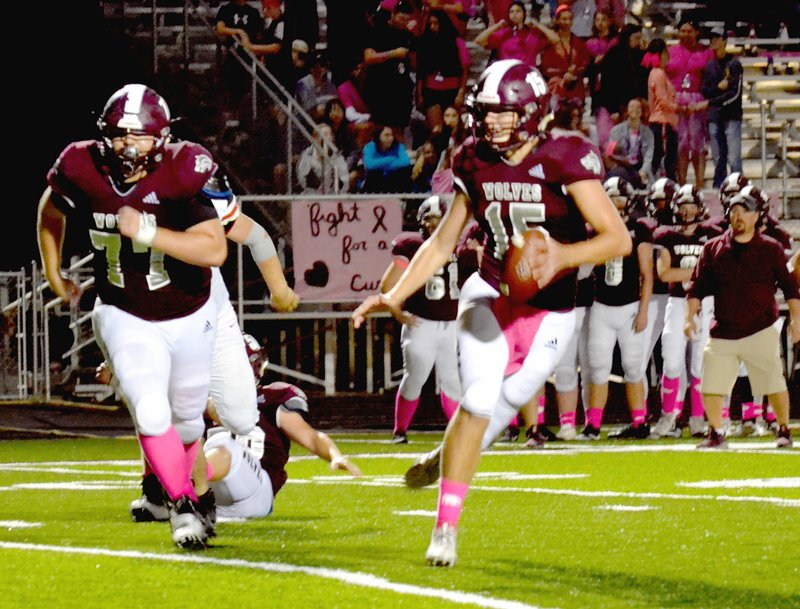 LINCOLN -- Pea Ridge coach Stephen Neal won his 20th conference game since taking over the Blackhawk program in a 55-21 rout of Lincoln Friday.

The Blackhawks started fast nearly activating the mercy rule in the first three minutes of the second quarter. Pea Ridge amassed 223 yards of total offense in the period with Lincoln losing 15 yards offensively. A sack by Blackhawk senior Mazon Harris for a 21-yard loss eradicated the Wolves' yardage.

Despite the lop-sided score Lincoln realizes they are headed to 3A next season while Pea Ridge moves up to 5A. Wolves' linebacker Cody Webb said the team believes they can compete in the 4A-1 and looks at this week's contest against Berryville as an opportunity for a win.

"We have a pretty solid team and we play as one mind as coach would say," Webb said. "If we can come together for those four quarters we can pull off a victory."

Beard rushed for 58 yards on the first four plays. Busey then faked a handoff and ran untouched into the end zone. Senior Luis Reyes added the PAT kick and Pea Rige led 7-0 with 1:17 into the game.

Lincoln had trouble running against the Blackhawks and finished with a negative 12 yards rushing. The Wolves punted and tied the game on an interception runback for a touchdown followed by Noe Avellaneda's PAT kick.

On the next series, Busey passed to Rains who reversed the field then outran the defenders for a 45-yard touchdown. Luis Reyes' kick made the score 14-7 with 7:06 showing.

The Wolves were three and out of their next possession and punted. On offense Busey passed 57 yards to Withrow for the Blackhawks' third touchdown. Reyes' kick gave Pea Ridge a 21-7 lead with 3:45 left in the first quarter.

Lincoln attempted a fourth and 13 but a bad snap led to a run by the punter and he was tackled at the Lincoln 19. A penalty on the Wolves moved the ball inside the 10, with Beard scoring on the next play. Reyes' kick established a 28-7 lead for Pea Ridge going into the second quarter.

Deleon ran for a touchdown with 9:34 left in the half. Reyes' kick put the Blackhawks ahead 35-7.

Pea Ridge senior Lance Nunley covered a fumble on the Lincoln 22 and Pea Ridge scored again with Busey passing to Blair for the Blackhawks' sixth touchdown with 8:09 left in the half. The PAT snap was bobbled and the score stayed 41-7, a point from activating the mercy rule.

Lincoln got the offense going, overcoming a sack with quarterback Tyler Brewer running the ball. He passed to Daytin Davis for a first down, then lofted a 26-yard touchdown pass to Davis. The PAT kick was good, trimming Pea Ridge's lead to 41-14.

After a turnover on downs at the Wolves' 24-yard line, Brewer completed 10-yard passes to Levi Wright and Blake Arnold, then found Arnold who scored a 56-yard touchdown. With the PAT tacked on Lincoln trailed 41-21 at intermission.

The Wolves would not score again with Pea Ridge adding a pair of touchdowns in the third quarter to increase the margin to 55-21.

Both teams turned the ball over on their first two possessions of the fourth quarter. Lincoln fans felt some excitement when the Wolves blocked a field goal with Davis scooping up the ball and running it back over 80 yards before Pea Ridge tracked him down at the Blackhawk 14. A penalty against Pea Ridge placed the ball on the 7, but the drive ended when Blackhawk sophomore Joe Adams intercepted a pass in the end zone.

Three plays later Lincoln got the ball back, recovering a fumble on the Pea Ridge 23. Again the Wolves moved inside the 10, but were intercepted.

While Berryville looks to improve, Webb said the Wolves believe they are equal to the task and will play better than they did against Pea Ridge.

"We keep coming after them every year and we pull it off every year, too," Webb said.