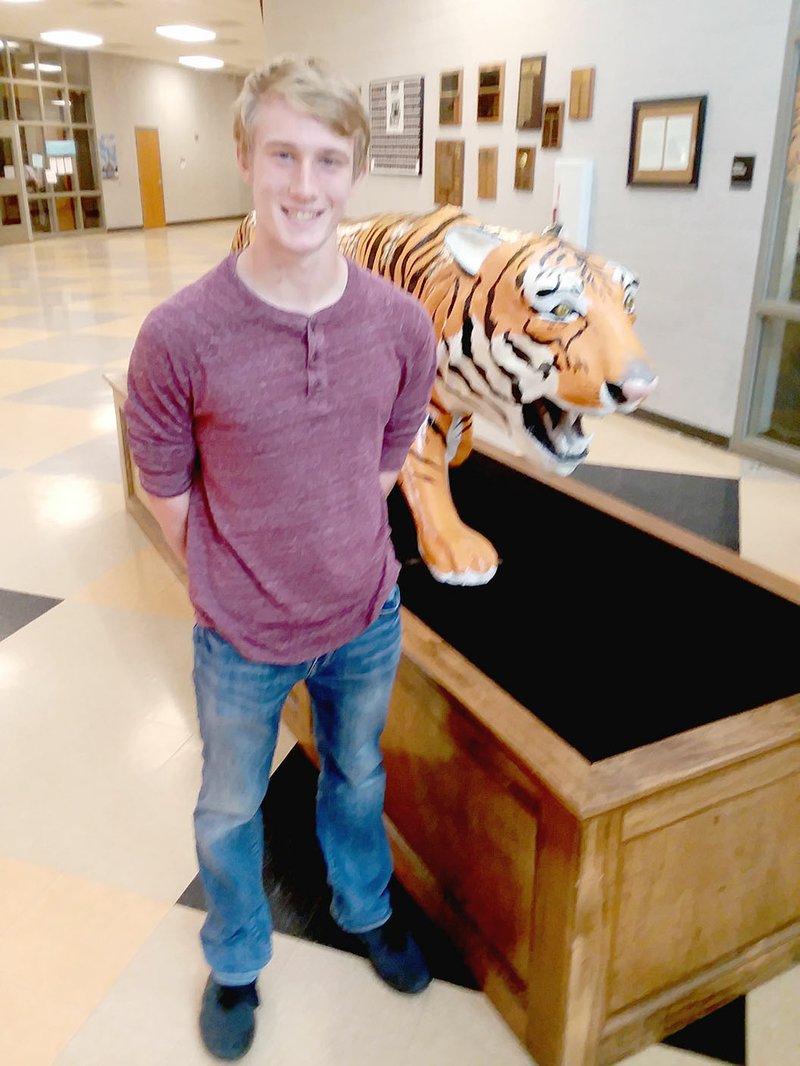 MARK HUMPHREY ENTERPRISE-LEADER/Prairie Grove sophomore John King poses by the Tiger mascot at the front entrance to the high school. King scored his first touchdown against Green Forest on Sept. 27 with an interception runback of 50 yards. That win and Friday's 48-7 victory over Gravette gives Prairie Grove (2-3, 2-0) going into this week's game against Shiloh Christian.

PRAIRIE GROVE -- The Tiger defense scored three times on interception runbacks in a week four 55-14 blowout of Green Forest which got Prairie Grove into the win column for the first time in 2019.

Speedy junior Cade Grant was named Player of the Week with 79 yards rushing on only 5 carries plus a 57-yard interception runback for a touchdown. Grant said the team picked up steam with the win coming into Friday's game against Gravette.

"It was very fun the other night at Green Forest. We played very hard and that gave us kind of a confidence booster going into conference. It really helps, especially on the defensive side 'cause we did get three 'pick sixes.' So, I think it will be beneficial for the coming weeks," Grant said.

In the first quarter with the Tigers leading 21-0, the 5-10, 182-pound junior was surprised when a Green Forest pass came right into his hands, especially right after teammate Cordelle Whetsell had just returned a pick 40 yards for a touchdown.

"I'm not real sure what the quarterback was doing because he kind of just threw it right to me. I was running to my area and then I turn around, the ball's in my hands and then I just took off running," Grant said.

"The coverage was pretty much perfect for that play so I thank Coach Laird for that one," Grant said.

In the fourth quarter, Prairie Grove scored on John King's 'pick six.' The score was the first touchdown of King's career and a dream come true for the 5-7, 150-pound sophomore linebacker, who plays a down lineman position on offense. King was honest, admitting he wasn't where he was supposed to be on the play.

"I started off by doing the wrong thing really. Coached called a rub and what that means I'm supposed to stop the quarterback if there's a pass. I didn't see it so I guarded the No. 2 receiver. I just happened to be, well, the wrong place, but right time. Yes, it was a dream come true," King said.

The old football cliche of "sometimes it's better to be lucky than good" played out to King's excitement. He concentrated on trying to stay with what he thought was his assignment, the No. 2 Green Forest receiver when he noticed the quarterback throw the ball a little too low.

"I was able to jump up, hit it up, catch it and make it for the run," King said.

When asked how many touchdowns he has scored in his career King just grinned.

"Zero, that was my first one," King said. "Conditioning helps. When you're definitely tired and it's a 50-yard run, yeah, then conditioning really helps you blast through the tiredness."

King pointed out the blocking of his teammates on defense made the touchdown possible.

"Tristan Hamerick blocked the guy I was guarding that was right behind me. If he didn't block him, I probably wouldn't have made it as far as I did," King said.

Fifty yards later he was in the end zone celebrating.

Grant also acknowledged blocking across the front on offense, which popped him for big runs.

"It's fun because the offensive line was blocking well, along with other key blocks from receivers and tight ends," Grant said. "It really helped bust big plays which were beneficial for confidence."

Grant said the big win at Green Forest helped the Tigers' mindset coming into the three-game stretch of facing Gravette, Shiloh Christian and Pea Ridge. The Tigers picked up more momentum by blasting Gravette, 48-7, to celebrate Homecoming Friday as they prepare to take on Shiloh Christian and Pea Ridge, traditionally the toughest teams on the conference schedule for several seasons.

"We definitely want to beat our opponent," Grant said.

"That's a key game that could be beneficial for playoffs and if we win that one it's definitely a confidence-booster for every other game and it will definitely help going into the playoffs."