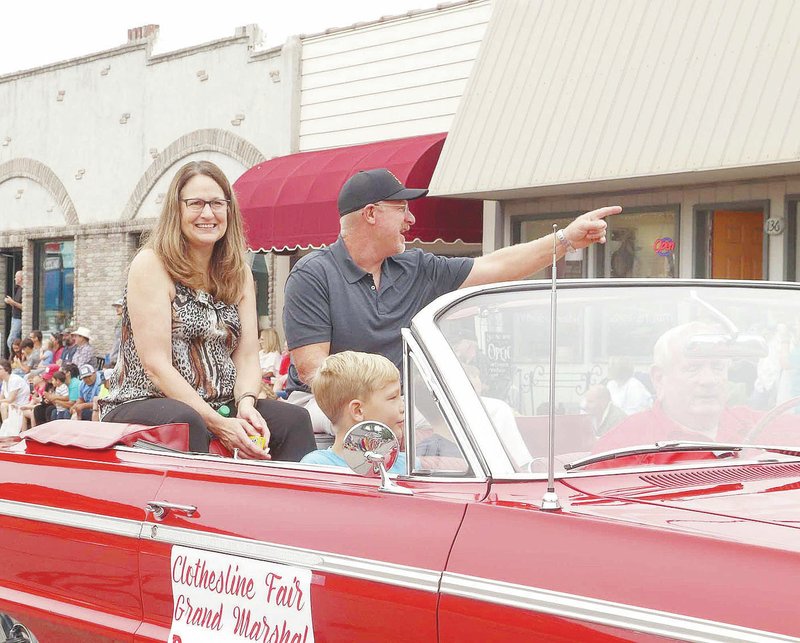 Prairie Grove football coach Danny Abshier was named Grand Marshal for the 2019 Clothesline Fair parade. His wife, Kaye, rides along with him in the parade.

PRAIRIE GROVE -- A few rain showers popped up during the Clothesline Fair but that didn't dampen the enthusiasm or affect the attendance for the 68th anniversary of the annual event.

Officials with Prairie Grove Battlefield State Park estimate more than 52,500 people attended the fair over the three-day Labor Day weekend. This compares to just under 52,000 in 2018.

Beard, who is only in his second year as club president, said lines were long Saturday, vendors did well and there was a "huge" turnout for square dancing.

"It was a great fair," Beard said. "We had a lot of people come out and everyone seemed to enjoy themselves. That's our goal."

The fair opened with the Clothesline parade, sponsored and organized by Prairie Grove Area Chamber of Commerce. The parade took off Saturday morning, Aug. 30, with cooler temperatures and streets lined with fans.

Though it is not an election year, many incumbents and challengers for state and local offices already have announced their plans for the 2020 primary and general elections. Some of these participated in the parade, with signs telling about their candidacies.

Children stayed busy throughout the parade as handfuls of candy were thrown out by those participating in the parade. It didn't take long for kids' bags to be filled with candy for the rest of the weekend.

With the parade finished, all attention moved to Prairie Grove Battlefield State Park where visitors could browse and shop at craft vendor booths, try many different types of food, listen to live music or attend historical interpretive programs sponsored by the state park.

Bryan Gott, the new executive director of Arts Center of the Ozarks, said 134 vendors registered for the 2019 fair, with 15-20 of these new vendors for the year. Gott said the center made a few changes, one being that four to five people from the center were on hand to help with any needs from the vendors and make sure the craft part of the Clothesline Fair ran smoothly.

Gott said he plans to sit down with the Lions Club and the state park to look at how the center will be involved in future years and whether it will make any changes.

"We're dedicated to the event happening," Gott said. "It's a historic event that deserves the respect it should get."

One vendor, Mary Maddox with Mountain Man Scrub, sponsored a booth at the fair for the third year. Maddox said she sets up at a festival or craft fair most weekends and returns to Prairie Grove over Labor Day weekend because of the atmosphere and the people.

"Everyone is down to earth," Maddox said. "It's beautiful here and the hospitality is phenomenal."

Linnea Caton of Stilwell, Okla., a former Prairie Grove resident, brought a friend, Velma Ketcher, to attend the fair for the first time.

"I look forward to it every year," Caton said. "It's a beautiful park and has such a variety of booths and food court."

Ketcher said she was impressed with how well the fair was planned and organized for visitors.

In the afternoon, many people start gravitating toward the park's amphitheater for a time of square dancing.

This year, 600 children and teenagers participated in the square dancing portion of the Clothesline Fair, with 15 groups competing in the evening competition and 60 groups dancing for exhibition only.

The competition starts Saturday night with the finals on Labor Day evening. Members of Northeast Oklahoma Square Dance Association volunteered their time to judge the groups both nights. Scores from each performance are tallied to determine the winner.

The hill overlooking the park's amphitheater was packed Sept. 1 as families, friends and many from Prairie Grove and other communities set up for an evening of high-energy square dancing. Craig Battles, who coordinates square dancing for the Lions Club, estimated 4,000 people were at the competition Monday night.

Hoot-N-Holler scored 556 points, 20 points more than the second-place group, to be named the first-place winner of the 2019 Peggy Parks Memorial Square Dance Competition.

Hoot-N-Holler has come in second place for the past two years. In 2016, the Original Hoot-N-Holler also finished in second place. Cade Grant, a junior on Hoot-N-Holler, said this is the first time for the eight in the group to dance together. He attributes their win to lots of hard work. They also started practicing earlier in the year and the week before the fair, they practiced every night, Grant said.

Battles said he appreciated state park staff and the arts center for going "above and beyond" this year for the Clothesline Fair.

He also expressed his thanks to many people who helped put up chairs and pick up trash after the final competition. The state park was hosting guests the next day and Battles said he wanted to make sure the park was cleaned up and ready for the guests.

"It was a good fair. Everything went well," Battles said.