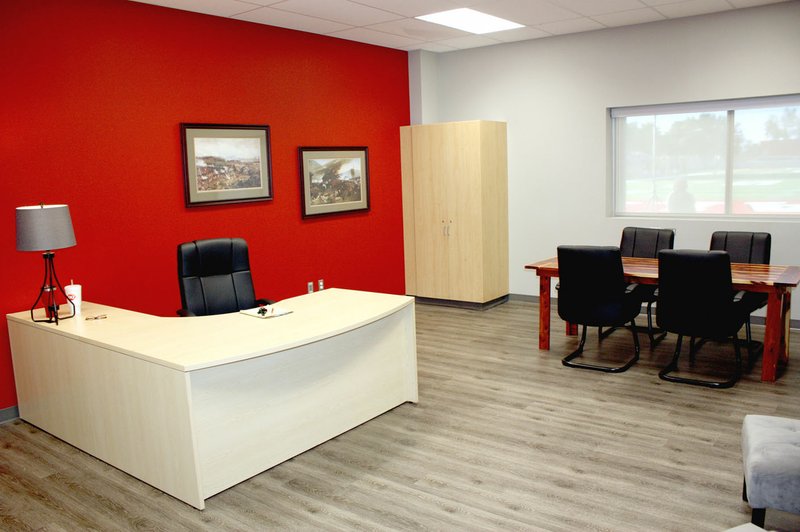 MARK HUMPHREY ENTERPRISE-LEADER Farmington's head football coach has a brand new, large, spacious office where conferences can be conducted in private. Current head coach Mike Adams, who is closing in on 100 wins at the school, is the first man to occupy the space. The conference table to the right was handcrafted by assistant coach Greg Pair.

FARMINGTON -- Assistant coach Greg Pair sought and discovered opportunity to get into the ranks of football coaches at Farmington in 2018.

Pair didn't have a relationship with head coach Mike Adams before coming to Farmington, yet desired to coach football and made himself available.

He coached four years at Lavaca working with the Golden Arrow volleyball, baseball and basketball programs after working full-time in ministry from 2000-2014, then on a part-time basis through 2017.

"In August (2017) when the ministry side of that ended I just started looking for other opportunities," Pair said.

Pair and his wife, Jamie, have been married 15 years. Of his spouse, Pair says, "I'm definitely blessed. I out-punted my coverage. She's definitely one of the best things that ever happened to me."

Pair graduated from Greenwood High School in 1999. He played high school football there in the defensive secondary and as a wide receiver and special teams field goal snapper.

Pair attended Arkansas Tech earning a B.S. of Arts in Oral Communications with a minor in Philosophy. The couple also considered relocating to Russellville where both had attended college, but Farmington presented a strong appeal. Jamie's family lived at Farmington during the early 2000s, and the couple really liked Farmington when they would visit.

"I really liked the place. I enjoyed coming up to visit them, just the atmosphere of the community was awesome. You have the hustle and bustle of the northwest (Arkansas metropolitan region) just to the side of you, but you don't have to be in it every single day. I really like that," Pair said. "And so, me and my wife, we have three kids, we all coming this way are really excited about the opportunity, we're excited about this community and being a part of it."

"I really wanted to get to football. I did ministry full-time up until 2014 and got into teaching and coaching," Pair said. "My whole life I wanted to be a football coach. It's just what I wanted to do. It's what I played. I enjoyed it and got the opportunity to interview. I really tried to make the most of that and you know the rest, I guess, is history at this point. I'm loving it. Coach Adams has done well to take me in and just be patient with me. The other coaches have been right there to answer any questions, to push me along. It's been a learning curve but one I'm enjoying and embracing and hopefully contributing, too."

Among his contributions Pair crafted two beautiful wooden tables and donated them both to the Farmington football program. The smaller one enables Adams to conduct conferences within the privacy of his spacious office in the fieldhouse; and the larger table occupies the center of the assistant coaches' office in the heart of the $16 million Farmington Sports Complex.

Defensive coordinator Jay Harper showed off a table large enough to accommodate the entire Cardinal staff while guiding tours of the facility during an open house Aug. 15.

"Coach Greg Pair made us a table so that we can all meet," Harper said.

Pair found opportunity while Farmington acquired the kind of person winning programs seek out, someone who willingly invests their energy, talent and expertise into making a team, school and community better.