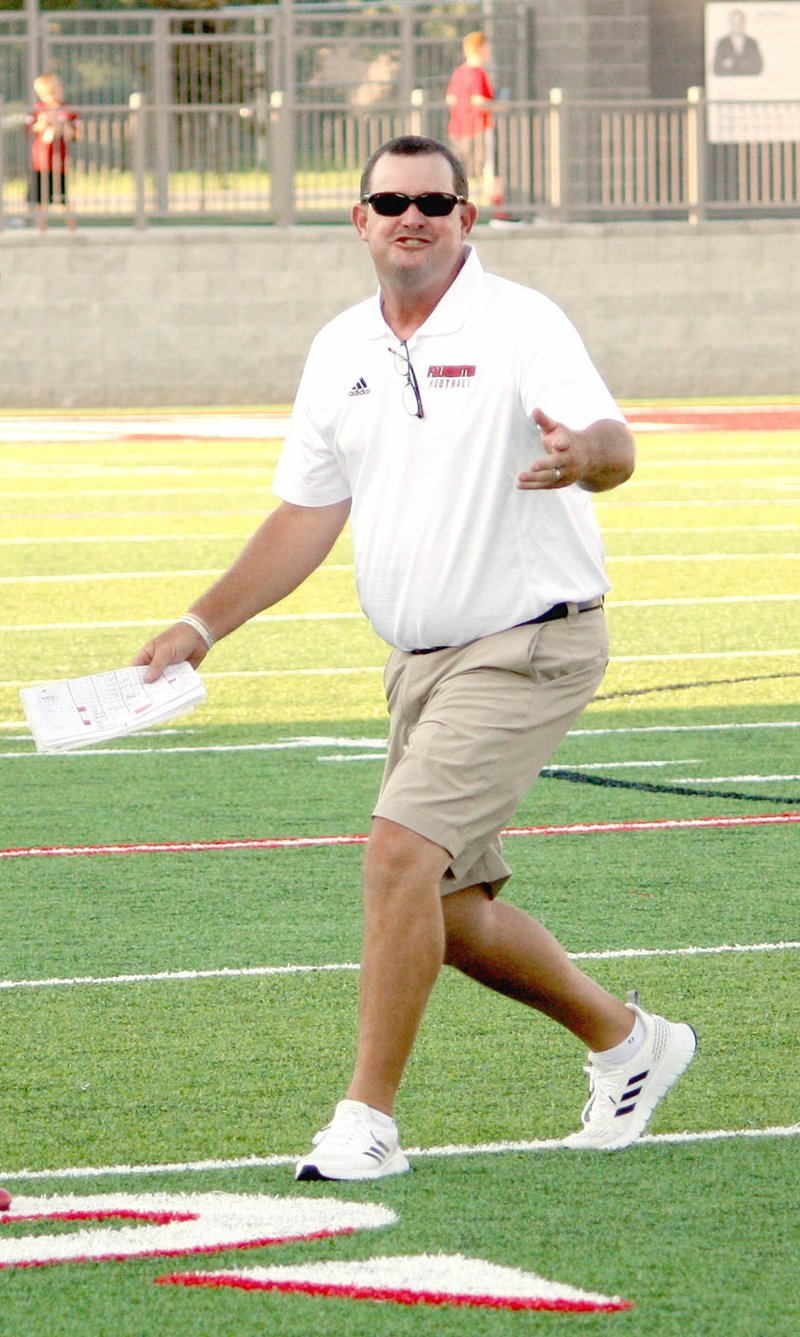 MARK HUMPHREY ENTERPRISE-LEADER Jay Harper returns as Farmington defensive coordinator after a few years hiatus. His defense played a second half of shutout football in the Cardinals' 27-7 victory over rival Prairie Grove Friday to open Cardinal Stadium with a win.

FARMINGTON -- Jay Harper never entirely got out of coaching football, but now he's back to what he does best, doing business as Defensive Coordinator for Farmington Senior High.

Reinstated as defensive coordinator this past spring, at the request of Farmington head football coach Mike Adams, Harper's presence takes some of the pressure off Mike Adams, who called the defense last year when coach Tracy Sutton left the program to become junior high assistant principal.

"I enjoyed it a lot. I started my career as a defensive coordinator and I've been a defensive guy so It was fun to get back over there and do that, but I felt like I neglected some of the other aspects of the team," Mike Adams said. "I was too busy. When we were on offense I was trying to get things squared away with the defense, and felt like I couldn't pay enough attention there or on special teams."

Harper understood. Head coaches value defensive expertise. He purposely diminished his involvement with football a few years back, and didn't automatically agree to accepting the responsibility. The separation allowed him to concentrate more on baseball in the spring as head coach in that sport. Yet, Harper perceived he could fill a need especially with the completion of a brand new state-of-the-art $16 million Farmington Sports Complex and Cardinal Stadium.

"Coach (Mike) Adams is in a tough spot. He wanted to coach a little bit more offense with his son, Spencer, and we really don't have anybody on staff that has a lot of defensive experience and he did come to me and did ask me to come back and I had to think about it for a couple of days," Harper said.

Once he got out to spring practice and started working hands-on with the players all of the enthusiasm Harper contains for coaching the defensive side of the ball emerged, sparked in part by excitement from the team about the opportunity to compete within top notch facilities and a turf field.

"A couple of things factored in my decision. No. 1, I've been a defensive coach all my life and this facility being built is something I couldn't pass up. Yes, it played into my decision to come back. A lot of things played into my decision," Harper said. "It makes me stay young to be around these guys and that was a great deal. I think it's going to take a little bit to get back in that mode, but for the most part I think it's going to be a great, great transition."

Harper projects unabashed exuberance, which becomes contagious when tacklers get praised for making a good hit or defending a pass. In preseason scrimmages, Harper shouted out encouragement to players for being in the right place even when they didn't make a play.

"He's not lost a step at all. He's just as excited as he's always been and he's like a kid in a candy shop about that right now. I think he's really enjoying it," Spencer Adams said. "I'm really enjoying it as the offensive coordinator and I know Coach (Mike) Adams is really enjoying it for he's been able to be more of a head coach now and I think it's beneficial for everybody. The kids love having him (Harper) around."

"You take a hiatus like I have for three, four or five years, and it takes a little bit getting back into the groove and getting the kids to play like you want them (to) and introducing your schemes and the kids have done a great job of buying in and doing what we want them to do," Harper said.

"I think it's going to be really good with this stadium opening up. There's a lot of excitement right now around the town and to open up with Prairie Grove, the first game here in high school, (we knew) it was going to be an exciting night. I'm glad to be back. I'm excited to be back and we're just ready to get going."

Mike Adams appreciates that Harper was gracious enough to come back and take an expanded role, noting he's a very experienced defensive coordinator.

"He's done a great job when he's done it before so we have every confidence that he'll do a great job over there and it does give me some more freedom," said Mike Adams. "I'm trying to take an expanded role in our kicking game. I think it can be a really big part of what we do. We've got some guys in both the kicking part of it and the return game. We're really trying to emphasize that this fall. So, having Jay back will help us. Hopefully, I'll do a better job of being a head coach."

Harper's defense played a major role in Farmington's season-opening 27-7 win over Prairie Grove stopping the Tigers inside the 10 in the final minute of the second quarter to preserve a 7-7 halftime tie, then shut out the visitors in the second half.

"That was huge. When we went in at halftime, that's what we were buzzing about. We were pumped. We got the stop and did not let them score right there, and I knew we could make some adjustments at halftime that could help us," Harper said. "They came out and won the second-half battles."