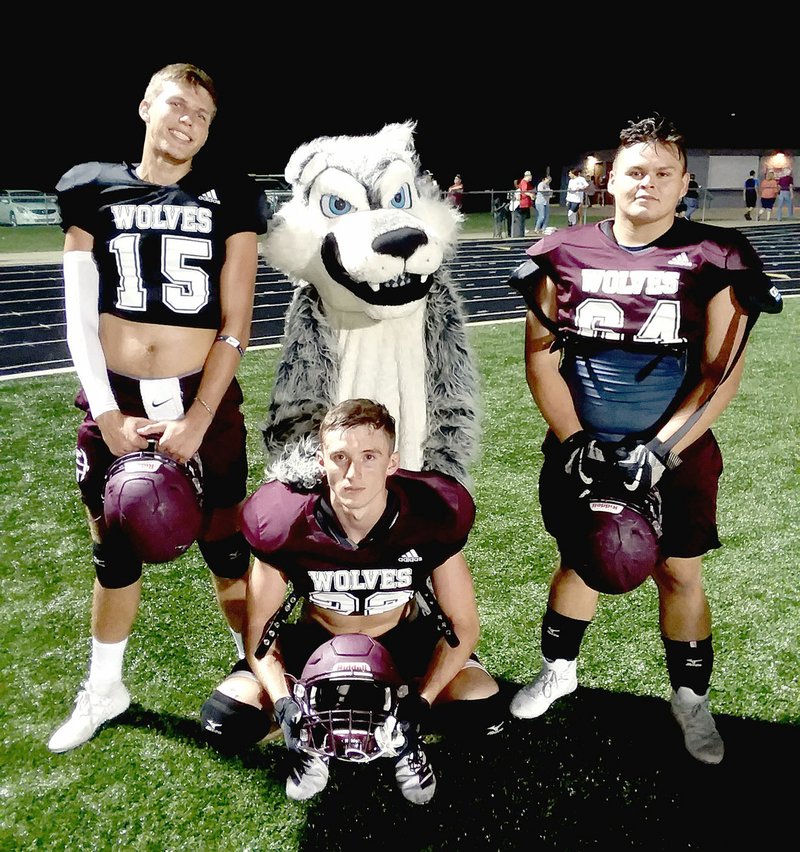 Coming into Friday's season-opener Westville, Okla., held a 19-9-1 series lead which included a 9-6-0 advantage at home over Lincoln. The Yellowjackets hoped to pick up their 20th win in the border rivalry, but Lincoln turned that dream into a nightmare routing the Yellowjackets 56-7 in front of their home fans and ensuring the Stateline Standoff trophy stays at Lincoln for another year.

Special teams factored heavily into the decisive outcome. Lincoln scored a safety less than two minutes into the contest when a snap went over the head of Westville's punter and he fell on the ball in the end zone. The Yellowjackets elected to punt the ensuing free kick from their own 20, but only netted 22 yards.

Westville had trouble holding onto the ball, fumbling away its next possession. On the first play following the turnover Lincoln southpaw quarterback Tyler Brewer connected with Daytin Davis for a 39-yard touchdown. Noe Avellaneda kicked the first of 6 extra-points and the Wolves led 9-0 with 8:33 remaining in the first quarter.

The Yellowjackets couldn't field a sky kick and Lincoln pounced on the ball at Westville's 40. Brewer, who completed 7-of-21 passes for 115 yards and 3 touchdowns before intermission, threw for 16 yards setting up Levi Wright's 5-yard touchdown run from the H-back position.

Leading 16-0 the Wolves again executed a sky kick with Nathan Khilling running under the ball. A long gain was wiped out by penalty forcing a punt, but Lincoln Morphis' interception got the ball back for the Wolves. Again Lincoln had to punt, and appeared to take the ball away with Marcus Sturgill recovering a Yellowjacket fumble. A penalty negated the turnover, but Westville didn't have enough yardage for a first down and punted.

Sellers began a 5-play, 71-yard drive by ripping off carries of 26 and 24 yards. Brewer was on target with a play-action pass for a touchdown to cap the march as the Wolves' lead increased to 23-0 at the 2:46 mark of the second period.

Westville fumbled another sky kick, but recovered this time. Lincoln muffed a punt setting up a 30-yard Yellowjacket touchdown drive culminated by Daxton Hembree's 27-yard run which got the home team on the scoreboard trailing 23-7 with 11:33 to go in the first half.

Brewer fumbled a snap in the shotgun yet coolly picked the ball up and hit Sellers, who ran 60 yards to the end zone only to have the big play called back by penalty.

Midway through the second quarter a mistake on special teams cost Westville field position. With nobody deep, Wright's punt rolled to the Yellowjacket 13 changing the line of scrimmage by 48 yards. Tanner Barnum recovered yet another Westville fumble at the five.

Lincoln lined up in the Wildcat formation with Avellaneda at quarterback. The junior took a direct snap and ran for a touchdown, then booted the P.A.T. stretching the Wolves' advantage to 30-7.

Avellaneda scored again taking a 5-yard pass from Brewer for a touchdown on the heels of a Yellowjacket fumble inside the 10. Lincoln held a 36-7 halftime lead.

Sellers rushed 11 times for 93 yards in the first half. The senior tailback finished with 152 yards on 17 carries highlighted by a 24-yard burst for a touchdown that put Lincoln up 43-7 in the third quarter.

Matthew Sheridan scored on a 4-yard rush and Rafael Regalado caught an 8-yard pass from Brodey Bowen to round out Lincoln's touchdown plays in the fourth quarter.