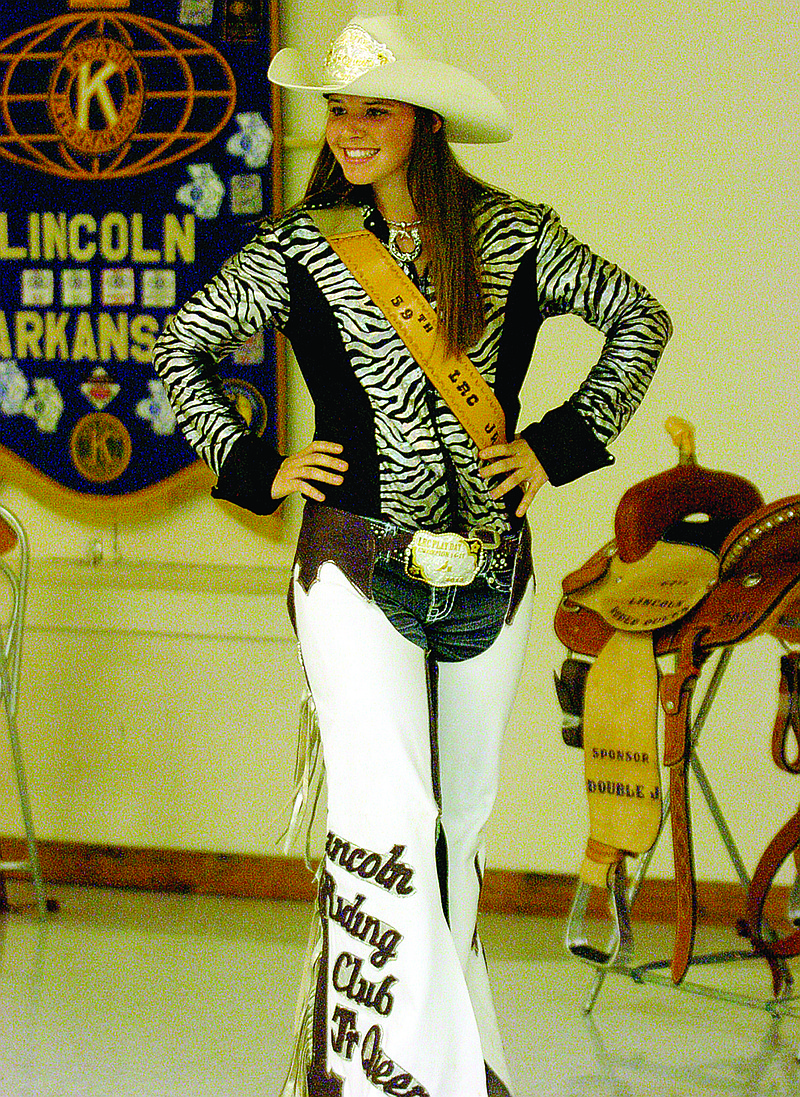 SPORTS EDITOR'S NOTE: This story is part of an on-going series highlighting top sports stories for the 2010-2019 decade at Lincoln High School and its alumni.

LINCOLN -- One particular young lady's name, Taylor Cunningham-Scraper, stands out interwoven with the history of the Lincoln community throughout the 2010-2019 decade.

Scraper wore all kinds of crowns during a stellar career growing up as a member of the Lincoln Riding Club and as a Lincoln High School student highlighted by an opportunity to represent her school, community and Arkansas at the Liberty Bowl played at Memphis, Tenn., on Monday, Dec. 29, 2014, mid-way through her senior year at Lincoln High School.

Scraper, daughter of Jason and Brandy Cunningham, of Prairie Grove, acquired a vast amount of experience making public appearances during her rodeo career, tapping into the expertise of her parents.

"My dad was a team roper back in his younger days so it's kind of a tradition," Scraper said. "It's a family lifestyle that we've lived for many years."

Scraper's selection for the America's Homecoming Queen pageant resulted from winning the Lincoln High School football Homecoming crown on Oct. 10, 2014, which, along with her rodeo pageantry expertise, led to her selection for an appearance at the Liberty Bowl. This is one of the top sports stories of the Decade: 2010-2019 published by the "Enterprise-Leader."

"I was selected for the Homecoming queen when I was a senior in high school and then I sent in a scholarship for the Liberty Bowl and I was selected out of many people to go down there (to Memphis, Tenn.)," Scraper said. "We did a halftime show. We were able to do a parade and just represent our schools and communities."

The Liberty Bowl is an annual post-season college football bowl game played in late December or early January since 1959. The game has been held at Liberty Bowl Memorial Stadium in Memphis since 1965 and the 2014 participants were Texas A&M from the SEC and West Virginia, giving football fans one more thing to celebrate in an extended holiday weekend linking Christmas with New Year's Day.

She had the distinction of serving an additional year as Lincoln Riding Club Junior Queen after winning the title in 2012 when no candidates emerged among cowgirls aged 12-15 in 2013. The title was temporarily discontinued for 2014 due to a lack of interest, but has since reemerged as a prominent sought-after title during the annual Lincoln Rodeo royalty pageant.

Scaper is the older sister of 2019 Lincoln Riding Club queen Landree Cunningham, whom she helped groom during last year's pageant.

"I would like to say that I had a big part in it," Scraper said. "We spent every weekend, every night, practicing on speech and modeling, every weekend on horsemanship. This is our lifestyle so we enjoy doing it. To be able to see my sister take the knowledge that I've given her to the next level it's pretty awesome. We're hoping to take her queening to the next level next year."

Scaper passes her heritage on down to her two daughters, Scarlett, and Taylin, both of whom compete in LRC Play Days in barrel racing, a one-barrel speed race, and pole bending. The oldest daughter, Scarlett is able to hold herself in the saddle, but Scraper's husband, Jalen Scraper, runs alongside the youngest, Taylin, making sure she stays in the saddle as she goes through the course in the lead line category. Spectators marvel at Taylin's fearlessness.

"She is two years old, and when she turns three we're going to turn her into a little rodeo queen and a barrel racer," Landree said. "She is absolutely loving horses and I can't wait for her to be a role model to other people."

According to Landree, Taylin never is scared.

"Absolutely never. She wants to go faster and she is the light to my day," Landree said.

Scraper draws a sense of satisfaction transferring her knowledge and her winnings down to her daughters.

Having given birth to two beautiful children, Scraper addressed the fear issue for people dealing with fear right now, who may even be afraid to have a baby with the coronavirus or leery of coming out to the 67th annual Lincoln Rodeo this week.

"I'd say live your life. Right now is a hard time for everyone, but this shouldn't put a hold back on people's lives, their lifestyles," Scraper said. "I feel like God has put us here for a reason, and if he wants us to continue in life then we will and you know he's not going to put anything on us that we're not strong enough for." 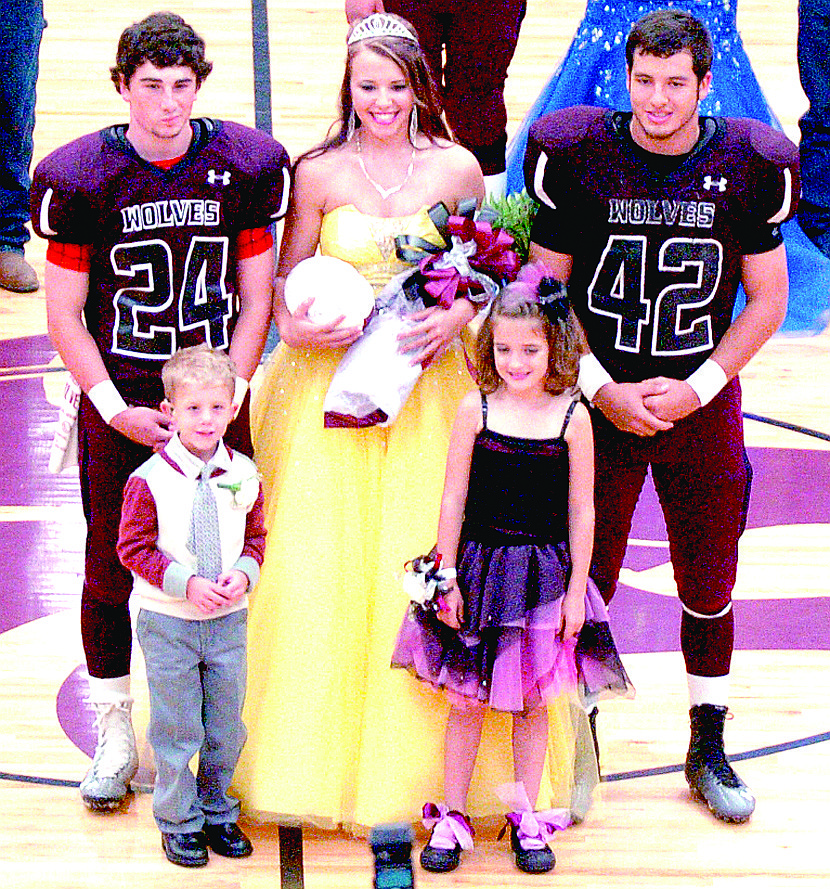 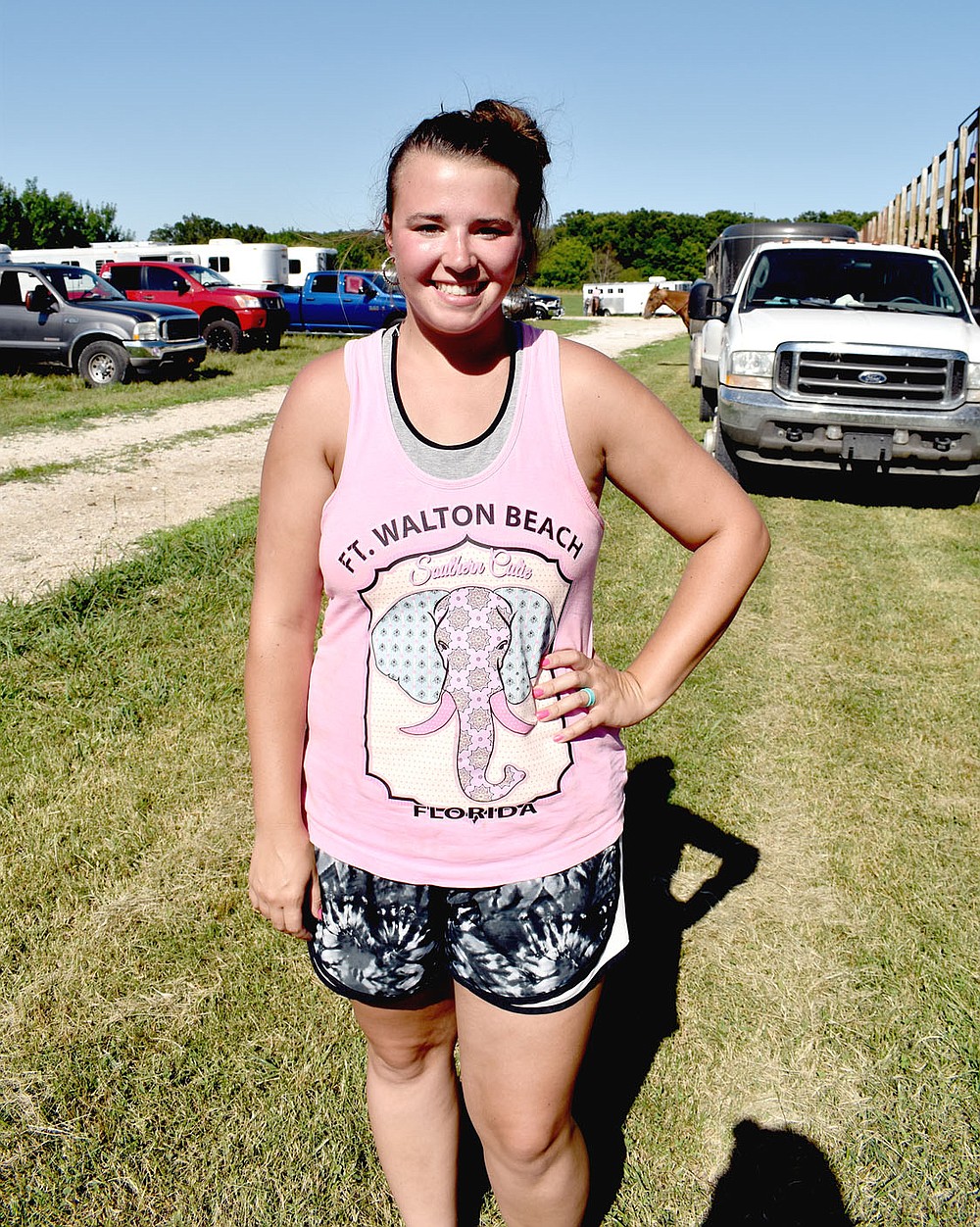 MARK HUMPHREY ENTERPRISE-LEADER/Taylor Cunningham- Scapper, daughter of Jason and Brandy Cunningham, of Prairie Grove, is a past Lincoln Riding Club Queen title as well as former Lincoln High School Homecoming Queen. She was selected to represent Arkansas during as part of America's Homecoming Queen pageant during the 2015 Liberty Bowl, at Memphis, Tenn., which has been selected by the Enterprise-Leader as one of the Stories of the Decade: 2010-2019 at Lincoln High School.