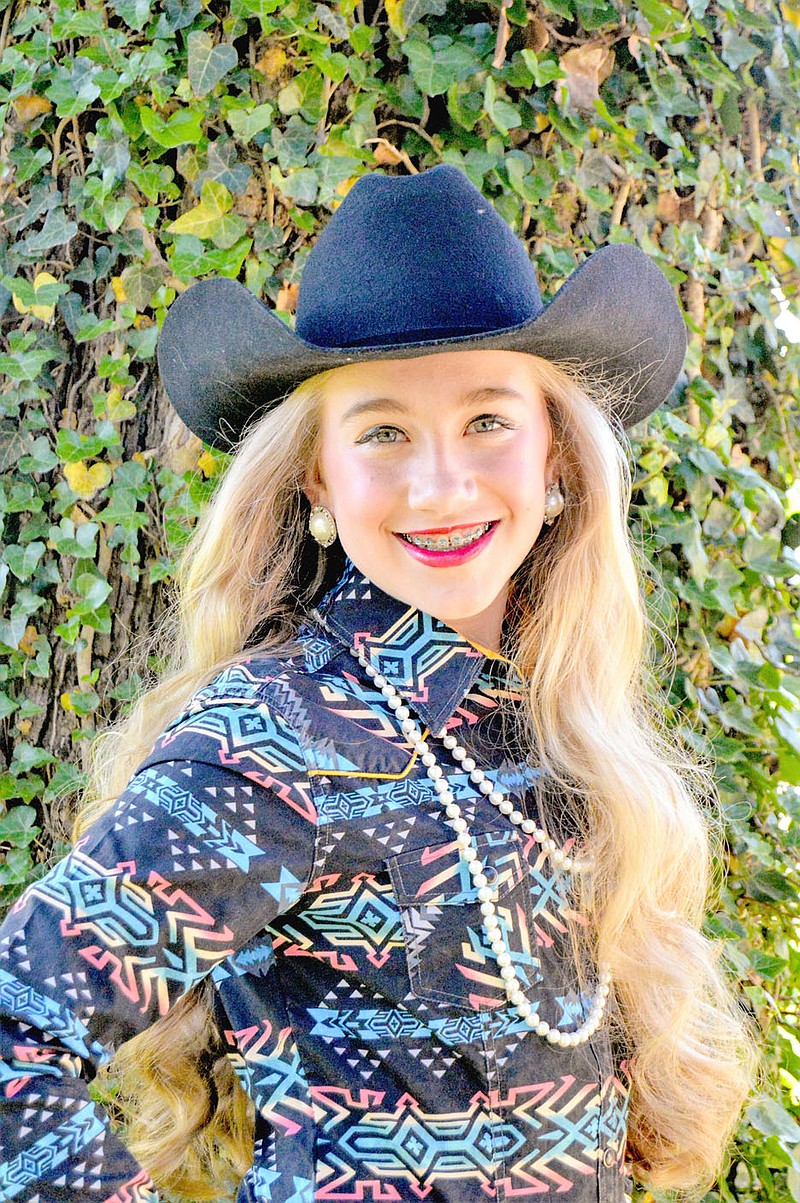 Submitted photo/Chloie Thomas, 11, daughter of Andrew and Ashley Thomas, of Farmington, is a candidate for Lincoln Riding Club Junior Queen. The pageant will be held Aug. 6-8 during the 67th annual Lincoln Rodeo.

FARMINGTON -- An affection for horses originated in the saddle at age two for Chloie Thomas, now the cowgirl wants to lasso the Lincoln Riding Club Junior Queen title.

"I want to become Junior Miss Lincoln Riding Club Queen to be that person that younger girls can look up to," Chloie said. "I want to grow as a horsewoman and work on my public speaking. I want to promote the sport of rodeo as well as these associations."

Chloie is the 12-year-old daughter of Andrew and Ashley Thomas, of Farmington. She is in the sixth grade at Farmington's Randall Lynch Middle School. Among her career ambitions, Chloie plans to train horses while getting her degree to become an equine veterinarian.

Chloie feels that becoming the Lincoln Riding Club Junior Queen is a way for cowgirls to further promote rodeo as a sport. She's grateful to have represented Lincoln Riding Club as their 2018 princess at multiple rodeos throughout a year-long reign. She enjoyed making friends and encouraging others to run in rodeo royalty pageants.

Chloie enjoyed representing in the past as the 65th annual LRC Rodeo Princess and CWRA Princess 2014.

She gets a thrill out of the various aspects of carrying a rodeo royalty title such as carrying the American flag at rodeos, displaying sponsorship flags for multiple rodeo boards, passing out mutton bustin' awards to very deserving little cowboys and cowgirls, signing autographs for future rodeo princesses and fans, and making new friends throughout the process.

A shining memory came from passing out awards to participants during the Area 3 Special Olympics Spring Games in 2019. Chloie leveraged her passion as a platform for the peer buddy program, and sought to incorporate that at her school taking it a step further. Chloie's experience as a past LRC Princess fueled her decision to continue running for rodeo royalty, an endeavor she plans to keep going in the future.

She was also LRC Lil' Miss 2012 among numerous titles she has held.

Chloie is a straight A student and was student of the month. The past five years Chloie has been chosen to be a peer mentor for camp connect. Rodeo is not just a hobby for Chloie but a lifestyle. Rodeo has taught her so many lessons but the main one being hard work.