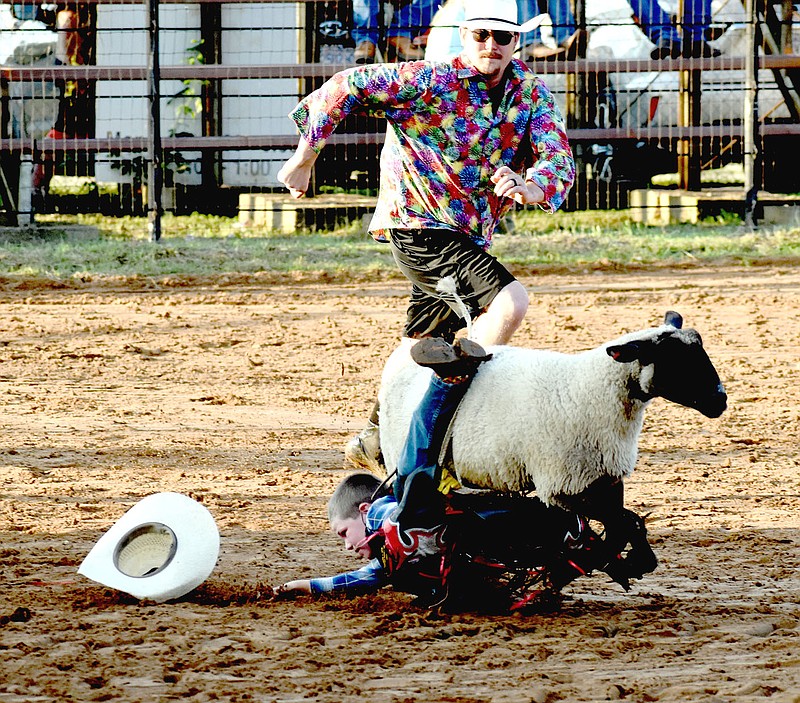 MARK HUMPHREY ENTERPRISE-LEADER/Junior cowboy Dax Ketzler got hung up during Friday's Mutton Busting, but he was OK scoring 78 points the hard way.

Total money paid out amounted to $17,378.29 for the rodeo, sanctioned jointly by the ACRA and IPRA.

Steer wrestling thrilled fans with four of the first five cowboys turning in times of 6.1 seconds or better to tighten things up Saturday. Mason Couch won the event in a lightning fast 4.4 seconds claiming $750.72 in prize money while Laramie Warren secured his steer in 5.0 to win $563.04.

Two of the top four scores in tie-down roping occurred Saturday. Tylen Layton, the next to last competitor, won the event with a time of 9.3 and pocketed $730.48. Earlier Ben Piazza turned in a time of 9.7, placing fourth with a $182.62 pay day. A pair of cowboys competing during Friday's slack, Austin Lawrence and Nathan Hughes shared second place with times of 9.6 and each won $456.55.

The ladies breakaway roping championship went to Rebekah Davis, the first cowgirl up on Saturday. Davis recorded a super fast 3.3 to win $710.24. Amber Butler and Kendyl Hutton were a 10th of a second off at 3.4 and won $355.12 apiece for sharing second place. Tamra Smith also won $355.12 with a time of 3.45.