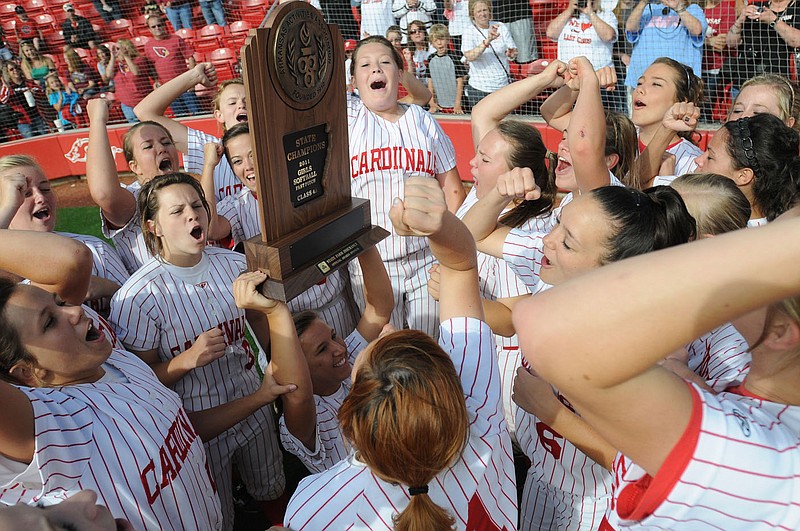 Staff Photo ANTHONY REYES The Farmington Lady Cardinals celebrate their win against Ashdown in the 4A state championship Saturday May 21, 2011 at Bogle Park in Fayetteville. Farmington had to get one out against Ashdown to win in a game continued from the previous evening. Farmington pitcher Madison Barnes threw five pitches before Ashdown hit to Kendra Center at first base to record the final out in the Lady Cardinals 7-5 win. The 2011 softball championship season is one of the top stories of the decade: 2010-2019 at Farmington.

SPORTS EDITOR'S NOTE: This story is part of an on-going series highlighting top sports stories for the 2010-2019 decade at Farmington High School and its alumni.

FARMINGTON -- When a state championship gets delayed overnight by weather a lot of things can enter the mind.

Losing was not an option in the thinking of Farmington coach Randy Osnes whose 2011 Lady Cardinals jumped ahead 7-0 in the state finals held Friday, May 20, 2011, at Bogle Park on the campus of the University of Arkansas then had to hold off an Ashdown comeback that narrowed the gap to 7-5 in the sixth before winning by that same score.

"From where we were there on Bogle Field you couldn't see the storm coming from the west because of the way the grandstands were set up," Osnes said.

Barry Gebhardt, who was Fayetteville athletic director at the time, came down to the dugout with a message for Osnes and the Lady Cardinals.

Up until that point once the game got underway Osnes and the Lady Cardinals weren't paying that much attention to the weather.

"So we kind of had a little heads-up, 'boom,' all of a sudden there's a lightning crack. I just happen to turn and all of a sudden around the dugout on the far side it was just black," Osnes said.

Farmington returned eight seniors in 2011, a group who progressively moved deeper into the state tournament throughout their careers.

Led by center fielder Kala Crisp, who batted .466 with 4 homers and 39 RBIs, along with shortstop Michaela Larabee, first baseman Kelsey Evans, catcher Kelsie Stewart, second baseman Kylee Lewis, utility player Andi Daniel, left fielder Jayme Doss (now Kutter) and right fielder Samantha Combs, the Class of 2011 came into the season rich in experience and deep with effort possessing offensive skills sufficient to put the heat on opponents, which they promptly did by scoring 5 runs against Ashdown in the first inning.

"We came out hot. Kala Crisp had a good hit. Some other kids had great hits and we kind of just jumped on them early and they kind of stayed steady," Osnes said.

Christian Parker, who had 2 hits, scored Doss with a single to center to get the Lady Cardinals on the board. Farmington tacked on 4 more runs before Ashdown could get out of the inning. Combs smashed a 2-run double, followed by a sacrifice fly by Peyton Wiedner and an RBI single from Lewis.

Farmington added 2 additional runs in the third inning. Wiedner stroked an RBI single into right field. After getting on board, she attempted to score but was tagged out at the plate by Ashdown catcher Danielle Winters.

Meanwhile Farmington junior ace Madison Barnes blanked the Lady Panthers throughout the first three innings before Ashdown pushed a single run across in the fourth and fifth innings. At one point Stewart fielded a bunt and threw out an Ashdown runner at first.

Barnes, who allowed 5 hits and walked 4 while striking out 8 in the finals, was named Most Valuable Player.

Ashdown didn't have a hit until Jaleesa Hurd singled in Tipton in the top of the fourth. The Lady Panthers got a second run in the fifth on an RBI single by Brittany McElroy.

The Lady Panthers rattled off 3 runs in the sixth. Tipton and Shelby Bankosh hit back-to-back singles to lead off the inning, and both later scored on a throwing error. Lexius Winfrey drove in Ashdown's fifth run with a sacrifice fly narrowing Farmington's lead to 7-5.

Umpires stopped the game in the top of the seventh with the same score and a classic softball late-game situation developing. Ashdown was batting and down to its last out with a runner on first after Candace Guffey singled to left field keeping Ashdown alive.

The game was delayed by lightning at 6:20 p.m. followed by a heavy thunderstorm. Eventually, at 7 p.m., the game was postponed with play tentatively scheduled to resume at 9 a.m. the next morning.

"I have a lot of memories from that game specifically after we didn't get to finish," Kutter said. ""We lost in the first-round as freshmen, then in the quarterfinals as sophomores, and in the semifinals as juniors. Each year we got one step closer to the finals. All of us were extremely upset that we didn't get to finish the game."

"We got the kids to the bus incredibly quick and we're headed back to Farm town. Of course, we're just eight or ten minutes away and they all, everybody's on the bus, it was just doom and gloom," Osnes said.

Sensing fear was trying to get a grip on his ball club, Osnes knew he had to counteract rampant thoughts of not being able to hold onto the lead and finish.

He utilized the 10 minute bus ride to Farmington to transform the Lady Cardinals by renewing their mindset.

He already delivered a message to the media before leaving the bus. The task was simple. Farmington needed to come back with the same passion and get one out equal to their efforts throughout the first six innings on the previous day.

"What you guys don't understand is we get to play another day. Whether it's one out, one pitch, whatever it may be, anything can happen," Osnes said to his players while emphasizing the situation favored the pitcher and team on defense with pressure on the batter endeavoring to produce a base hit.

"He told us we got to wake up the next morning, put on our pinstripes and be together one more time -- just kind of changing our perspective," Kutter said. "We get to do it all over for the last out."

Sometimes the victory song has to be sung first before the actual achievement occurs.

The next morning when Osnes arrived at the Indoor facility the team was ahead of him and they were already calling those things that were not as though they were as if the 2011 Class 4A State softball championship belonged to them.

The first thing he noticed was one of his players running around wearing a Native American warbonnet and beating a drum.

"I knew right then we were going to be OK," Osnes said.

When the game resumed on Saturday, May 21, 2011, Barnes fell behind 3-0 in the count to Ashdown shortstop Sydney Tipton with Guffey on first. Farmington, however, did not allow the Lady Panthers to take advantage of the disruption and engineer any sort of momentum.

"Then she threw two of the most beautiful pitches you ever did see," Osnes said.

Barnes, who finished the season with a 31-1 record, got strike one, then induced a pop fly to first base to end the contest -- giving Osnes his third state championship since taking over the program in 1996.

Farmington's other titles came in 2000 and 2005. The Lady Cardinals finished as State Runner-Up five times: 2001, 2002, 2003, 2018, and 2019. They were dominant during 2011 winning their 14th straight district championship and the 4A North Regional along with an undefeated regular season in conference play.

*Lightning and rain delay caused game to resume the next day. 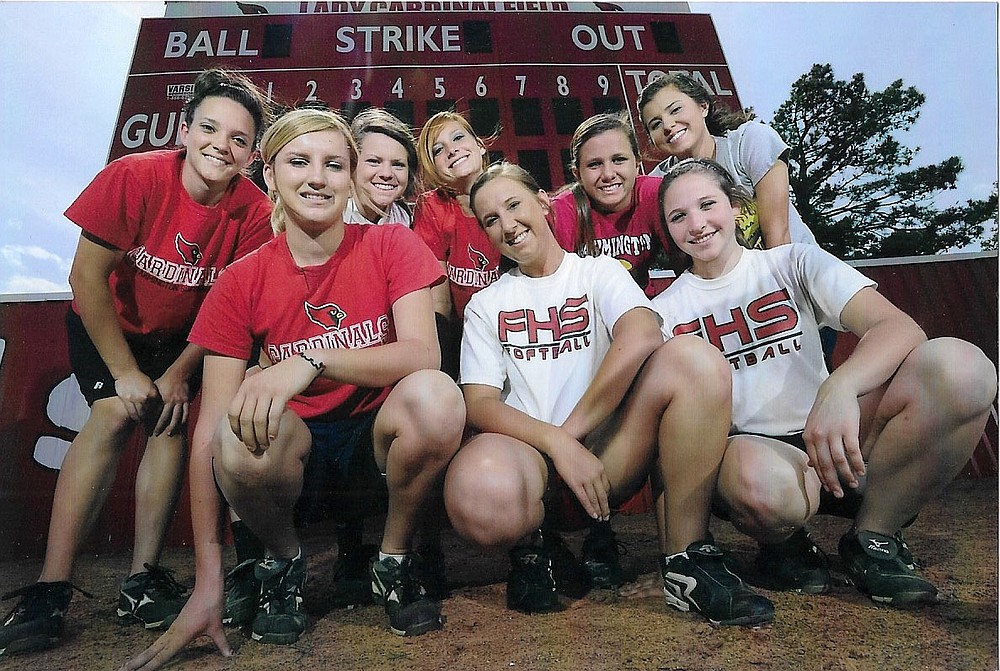 *Game postponed by weather, then resumed the next day.