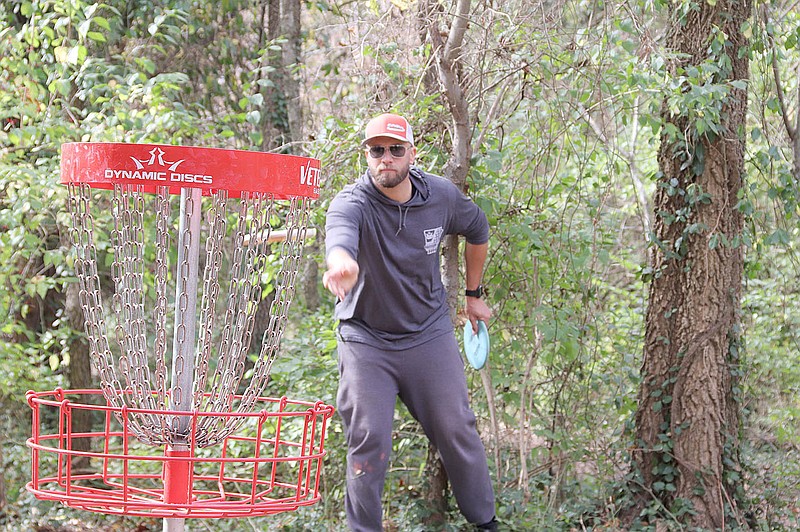 LYNN KUTTER ENTERPRISE-LEADER Justin McNab of Bentonville participates in a disc golf tournament held last month at Creekside Park in Farmington and two other courses in Northwest Arkansas. The tournament was sponsored by Dynamic Discs.

FARMINGTON -- Creekside Park's disc golf course was one of three courses used in the fall for a sanctioned disc golf tournament that drew more than 250 players from 15 states, according to Matt Loyd, tournament director.

Hosted by Dynamic Discs, the tournament featured 272 professional and amateur players competing in a three-day tournament, Nov. 13-15, at courses in Northwest Arkansas. Cedar Creek course in West Fork and a course at J.B. Hunt Park in Springdale were the other tournament locations.

Loyd, who owns a Dynamic Discs store in Springdale, said the tournament was sanctioned by the Professional Disc Golf Association and was the largest single disc golf event ever held in Arkansas. Professional disc golfers competed all three days and amateurs participated two days.

Eight of the top 40 disc golf players in the United States signed up for the tournament, Loyd said. These included Kevin Jones of Greenwood, winner of the Disc Golf Pro Tour Championship in Charlotte, N.C., and Luke Humphries of Hot Springs, Rookie of the Year in 2019 for the professional association.

"It's beautifully manicured," Harrison said. "It's good for an advanced level course."

Harrison said the course would be technically difficult for beginners but still provides a good experience for them.

A city that builds a disc golf course is adding a benefit to the community, he said.

"We all spend money when we come to town," he said. "It's good for the communities that host these things."

Mark Muren, who graduated from the University of Arkansas and now lives in South Carolina, was staying with family members while he competed in the tournament.

Jake Schlagheck of Minnesota described the course as "an amazing property and amazing area."

Farmington's course is located on about 30 acres at Creekside Park and opened for play during the summer of 2019. While many park facilities closed at the beginning of the covid-19 pandemic, the Creekside course has remained open throughout this year.

Floyd Shelley, the city's public works manager, said the course has been used by a lot of players since it opened.

"You don't have to clear the walk paths because they are beaten down to the dirt because of the use," Shelley said. "As far as trash, you have to look for a gum wrapper. They are super conscious of keeping it clean."

Farmington's course was designed by Kevin Hess and built with lots of volunteer hours by several people, according to Marshall Ward of Farmington.

Ward, a former Farmington High calculus teacher, said he talked to Mayor Ernie Penn about how to go about putting in a course and was told to put together a plan and bring it to the city. He said the plan included Hess' course design and estimated costs for baskets and concrete tee pads.

The city approved the plan, and within two years, after a lot of labor, Farmington had a course, Ward said.

Ward, Hess, their wives and several others spent many weekends cutting in fairways and dragging off debris and brush. The city helped by having someone come in to clear the land with a bulldozer, and Ward and his group came back to do the finishing touches to install the baskets and tee pads.

"Farmington has been amazing," Ward said. "They are the reason that the course got put in so quickly."

Farmington's course is a two-courses-in-one concept, which means many of the holes have an alternate Tee Pad for a shorter fairway.

"The course was meant to be technical and punishing and it definitely ended up being that way," Ward said.

Ward said disc golf players want to be challenged but at the same time, he and Hess wanted the course to be inviting to beginners. The shorter fairways were installed for beginning players, he said.

Penn said he's learned a lot about disc golf throughout this process and thinks the new course is an asset to Farmington.

"The key thing is that you want people to come to your community and that's a drawing card," Penn said. "When you have 30, 40 to 50 people come into your town and they eat lunch and buy gas, that's a good thing."

Penn said he didn't realize how popular the sport had become when he first started talking about it with Hess and Ward.

"It's pretty exciting. I think it's a good addition. It's a very clean sport. You see all kinds of people play it. Men, women, young and old."

The disc golf course was part of a $2 million expansion to the park that include basketball and tennis courts, a new playground, walking trail, pavilion, bathroom facility and extreme obstacle course. 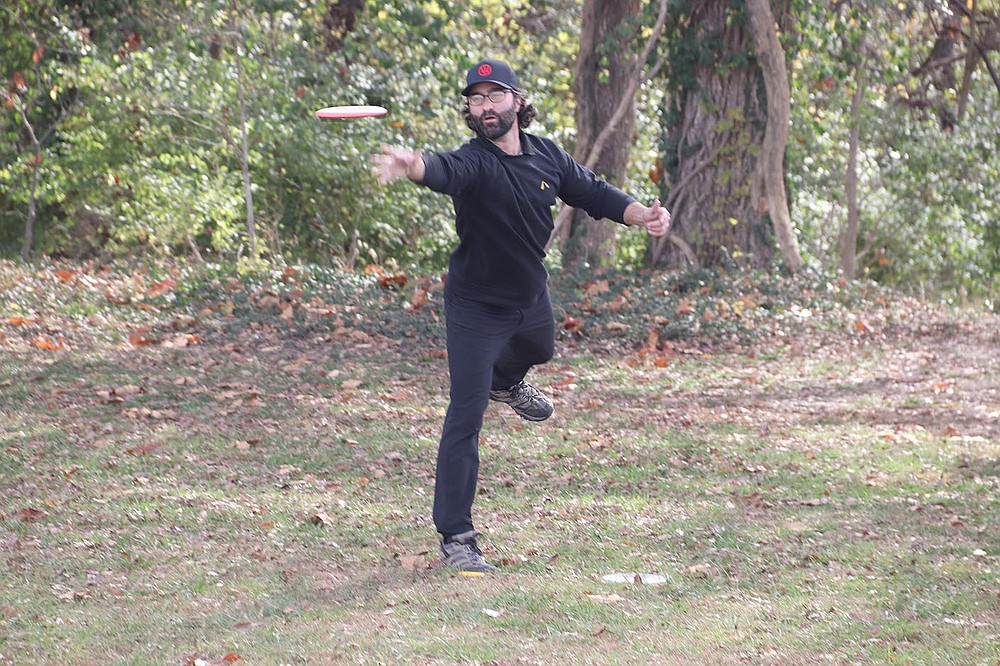 LYNN KUTTER ENTERPRISE-LEADER Billy Meyers of Springdale is a professional disc golf player. He's shooting toward the basket in this photo. 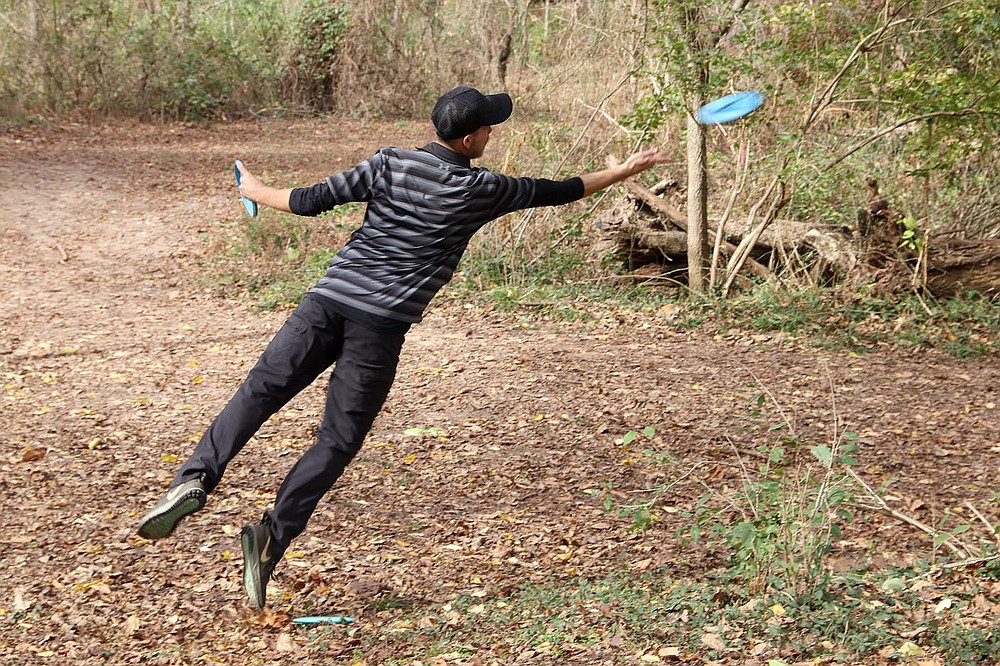 LYNN KUTTER ENTERPRISE-LEADER Steve Gerg of Texarkana launches a disc toward the basket during a recent tournament at Creekside Park. About 272 players competed in the three-day tournament, including men's and women's professional players. 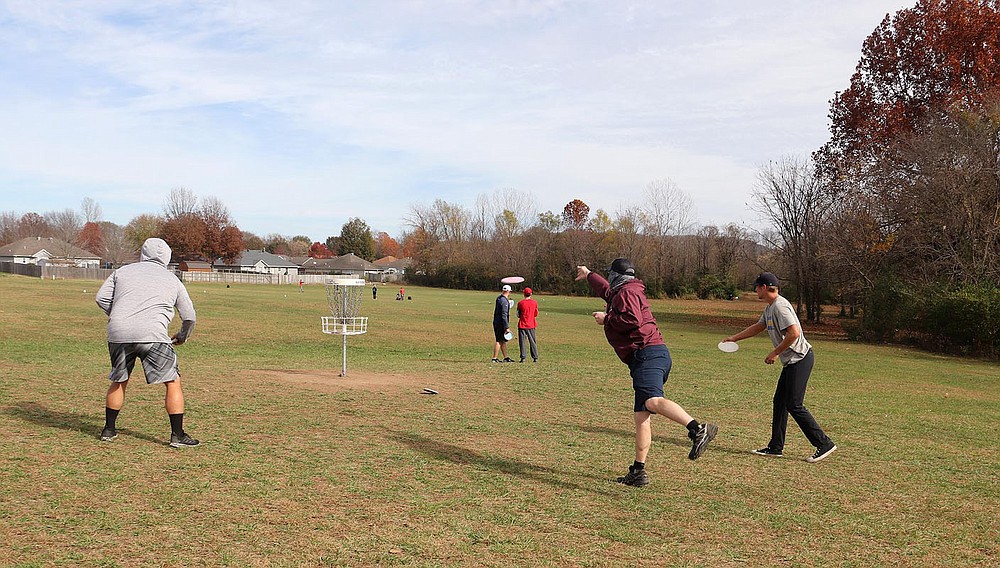 LYNN KUTTER ENTERPRISE-LEADER Players competing in a disc golf tournament at Creekside Park warm up on the course's practice basket. 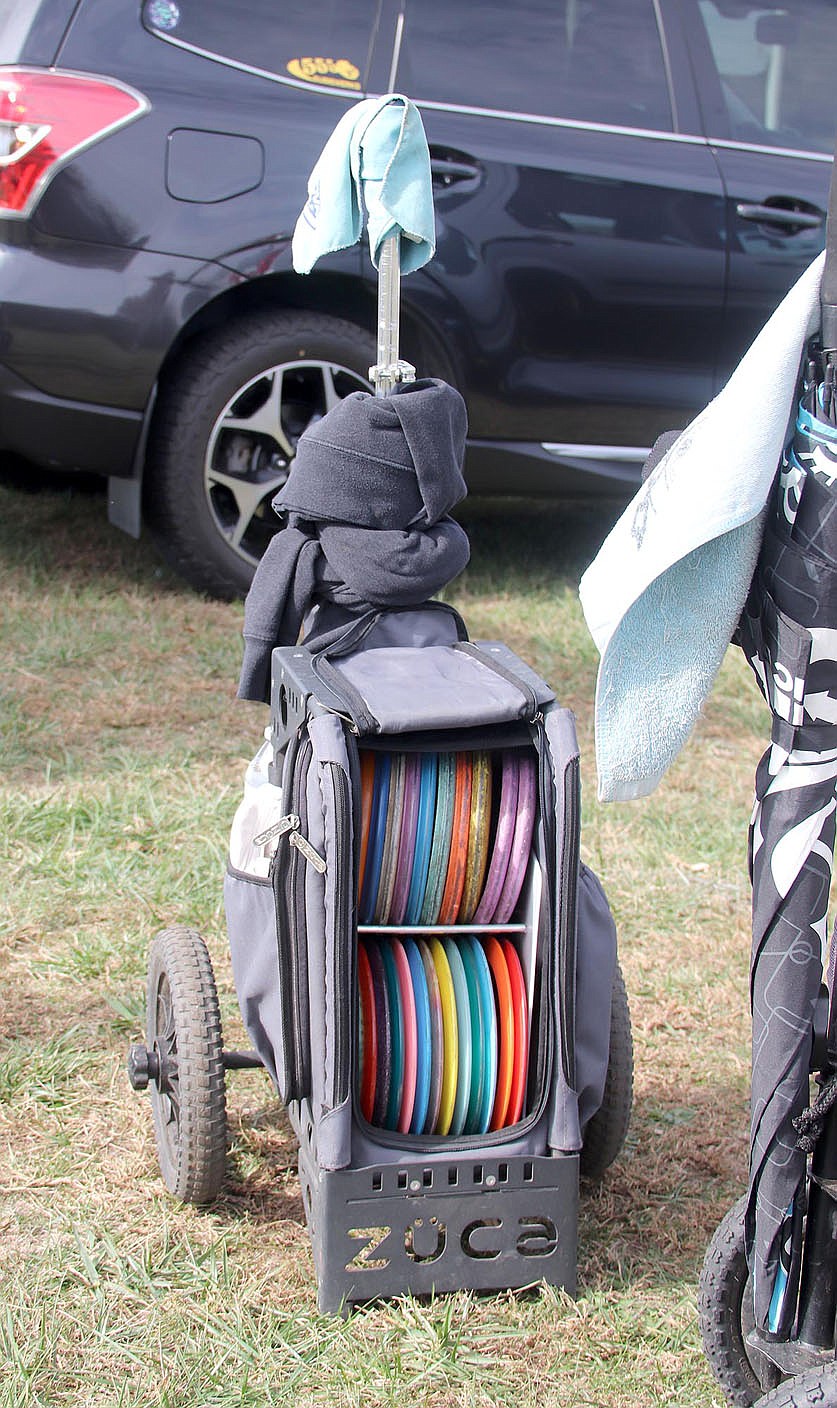 LYNN KUTTER ENTERPRISE-LEADER One of the disc golf bags for a player competing in a tournament in November that was spread out over three courses, including Farmington's 18-hole disc golf course at Creekside Park. 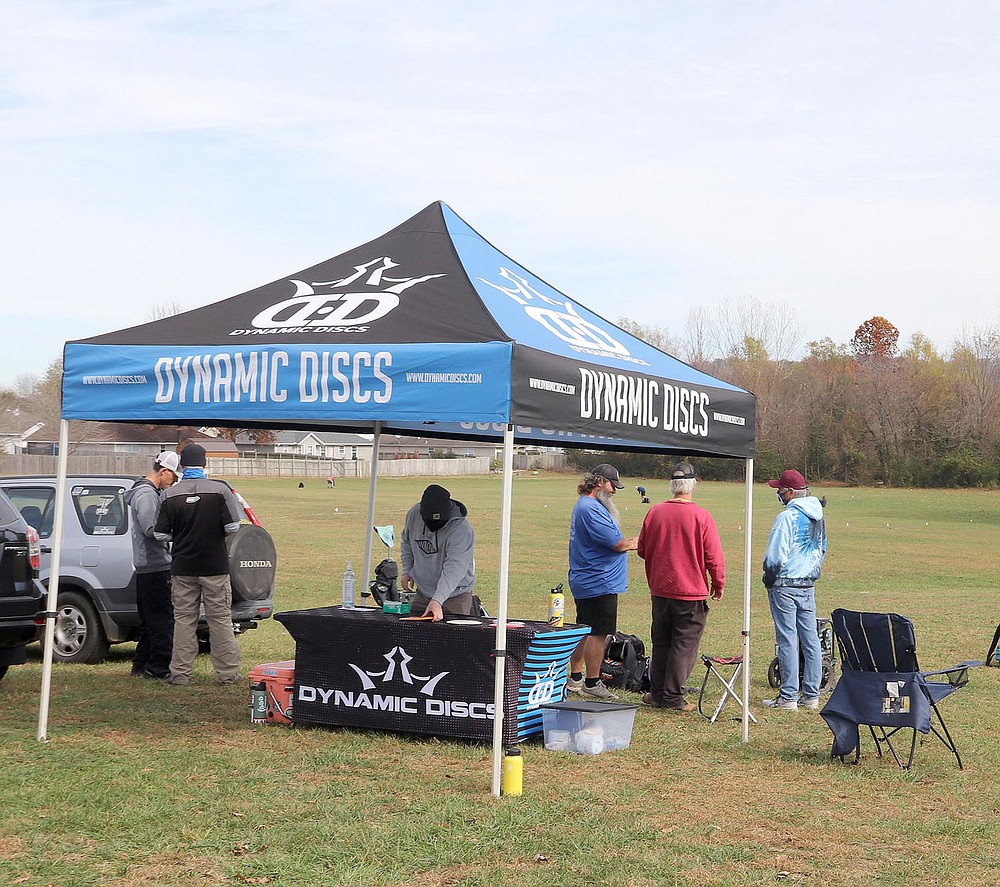 LYNN KUTTER ENTERPRISE-LEADER A registration table was set up for a disc golf tournament held in November by Dynamic Discs, which has a franchise store in Springdale. It broke the record for being the largest disc golf tournament for Arkansas. The three-day tournament was held at three courses in Northwest Arkansas and had 272 registered players. 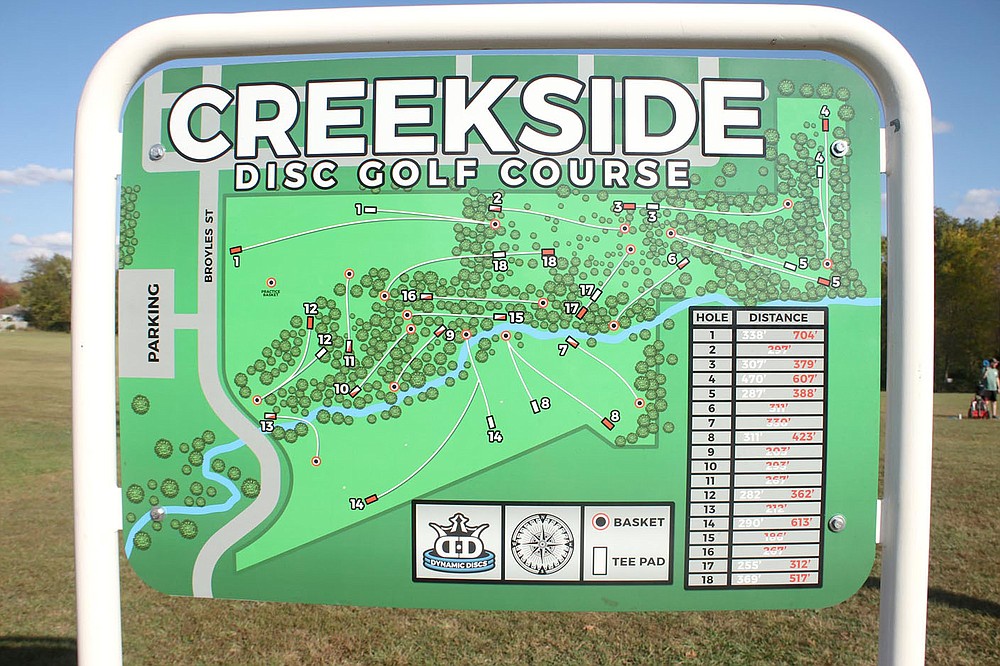 LYNN KUTTER ENTERPRISE-LEADER The city of Farmington opened the 18-hole Creekside Disc Golf Course in ??? It has remained open for players throughout the pandemic because it is outside and participants can socially distance from each other. 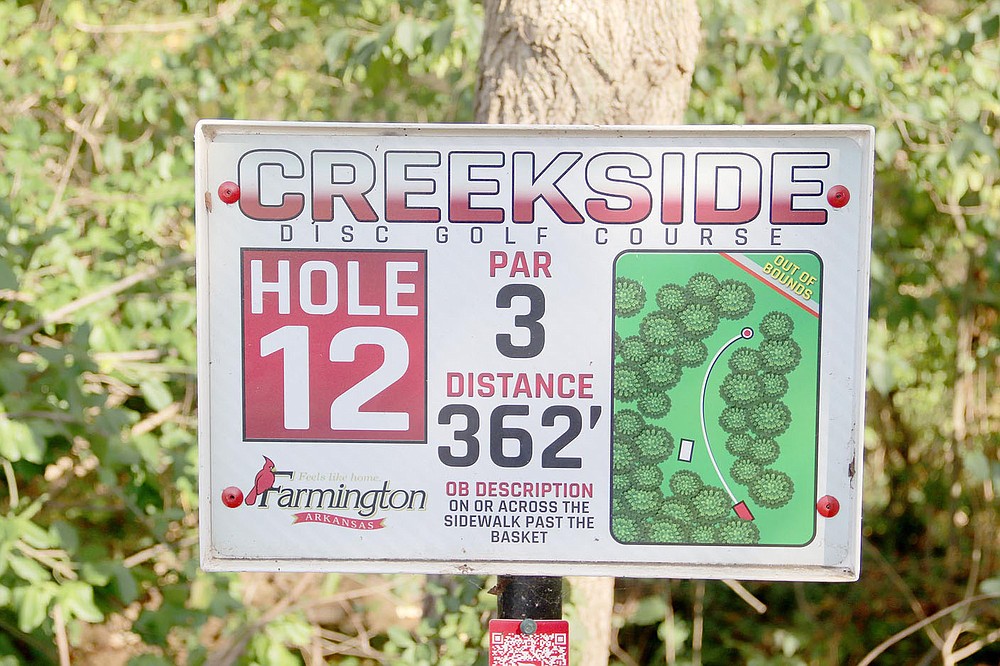 LYNN KUTTER ENTERPRISE-LEADER Each hole at the 18-hole disc golf course at Creekside Park in Farmington has this type sign for players.
ADVERTISEMENT