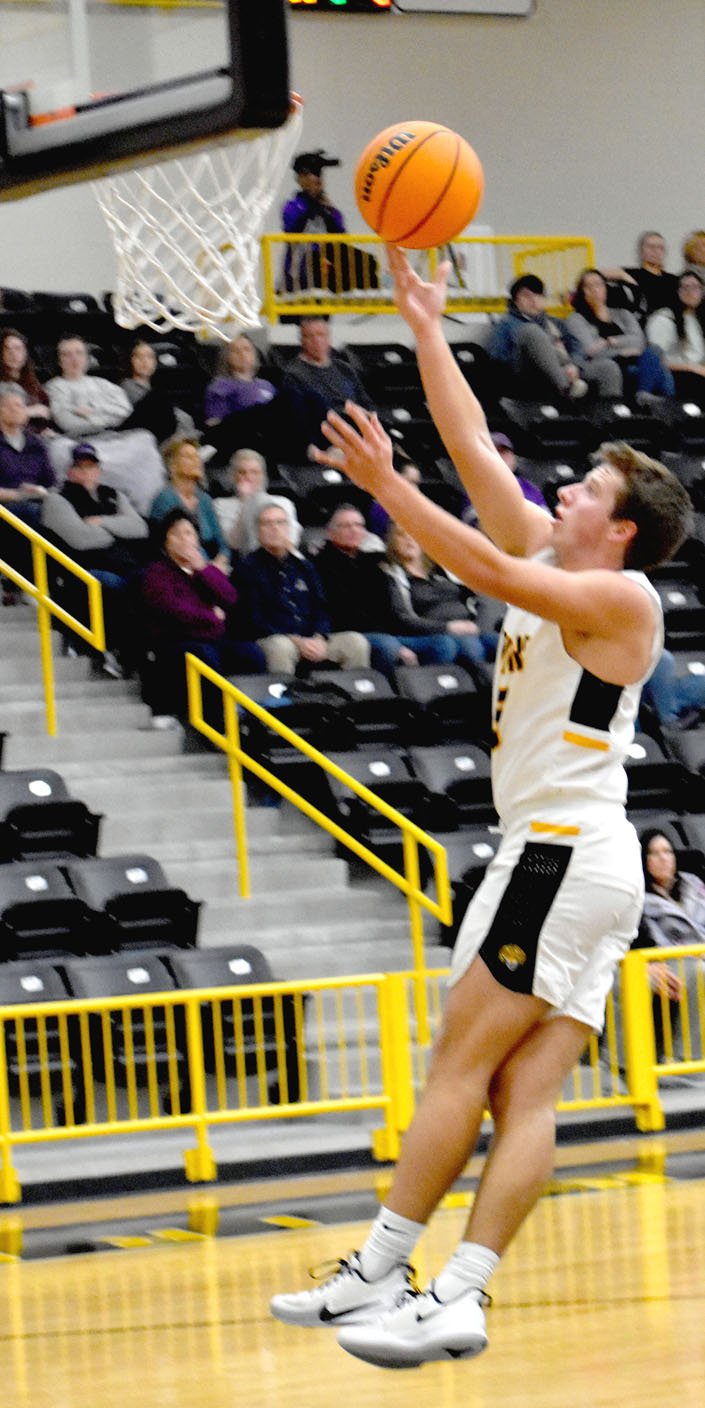 PRAIRIE GROVE -- When an opponent lights it up from 3-point range conventional reasoning among boys basketball is to stay in a man-to-man and work harder getting through screens.

At halftime Vertz told coach Steve Edmiston the Tigers should go zone, they did and turned the game around winning 46-43 over Berryville at home in boys basketball Tuesday, Jan. 28.

"It was something we worked on this week guarding the perimeter. They (Berryville) have two or three outstanding guards," Steve Edmiston said. "It did exactly what we hoped it would do."

Prairie Grove overcame a 16-9 deficit in the first quarter by outscoring Berryville 22-12 in the second half as they defended better coming out on the wings. The Tigers also warmed up. Carl Von Bergen and Noah Ceniceros knocked down 3-pointers with Prairie Grove closing to within, 35-34, at the end of the third quarter.

Berryville hit two 3-pointers in the first quarter including a buzzer-beater by J.D. Smith that ended the first quarter with the visitors ahead 16-9. The Bobcats went up 23-11 off Trenton Hutchison's trey followed by a steal and layup by Kade Davidson. The Tigers fought back clawing their way to get within 29-24 when John Mayers caught the ball coming across the lane for an easy basket. Berryville again beat the horn this time with Davidson driving to the goal for a 31-24 halftime lead.

Vertz asked for the defensive change at halftime and the Bobcats didn't get many good looks from long-range in the second half.

"It was a good suggestion on his part and we decided to go with it," Steve Edmiston said. "It worked out well for us."

The veteran coach implores the Tigers to get off to better starts, particularly early in the game at this stage of the season.

"We have got to learn how to play the first quarter," Steve Edmiston said.

He was pleased with clutch play late in the contest, however.

"Down in crunch time we hit some big-time shots," Steve Edmiston said. "Von Bergen got it going. That was a big lift for us hitting threes on the outside."

Von Bergen gave Prairie Grove the lead for good with a hoop and harm off a breakaway on a steal. He drilled a 3-pointer from the right wing. Landon Chester made Berryville's only 3-pointer of the second half trimming the lead to 40-38 with 2:47 to play. Ceniceros answered with a jump-hook in front of the rim.

Weston Teague's free throws again made it a one-possession game, but with 37.4 seconds remaining Alex Edmiston saw Mayers cutting the lane and fed him for a basket. Davidson converted an old-fashioned 3-point play nine-and-a-half seconds later keeping the pressure on Prairie Grove, which saw its lead shrink to 44-43.

Ceniceros flipped the switch on the Bobcats by making both ends of a 1-and-1 giving the Tigers a 3-point cushion with the clock down to 17.4 seconds. Berryville missed a trio of treys at the end of the game before the clock finally expired with the Tigers winning 46-43.

Von Bergen made five 3-pointers and led the Tigers with 18 points while Davidson topped the Bobcats with 11 and Chester added 10.