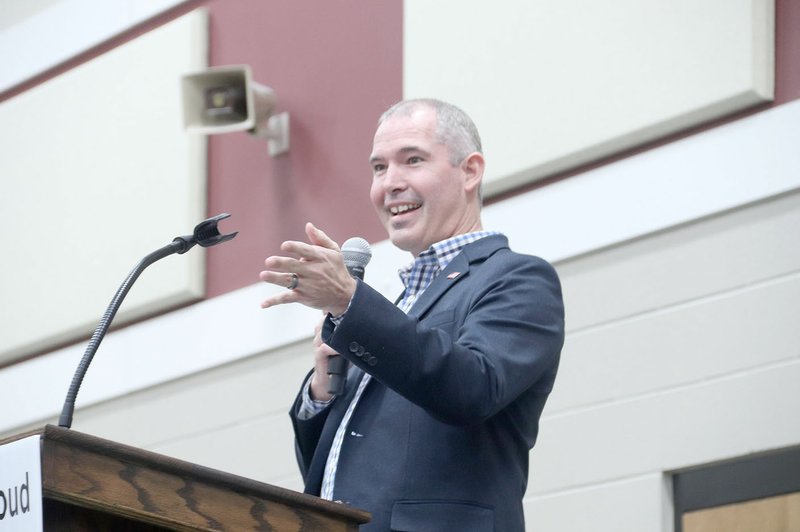 LYNN KUTTER ENTERPRISE-LEADER Joe Donaldson, president of Sam's Furniture in Springdale, speaks at the Lincoln Area Chamber of Commerce annual banquet. He challenged those at the banquet to look for ways to give back to others.

LINCOLN -- Looking out over a room filled with business owners, elected officials, city and school representatives and community members, Joe Donaldson, president of Sam's Furniture in Springdale, urged everyone to look for opportunities to serve others.

"We all have something we've been blessed with," said Donaldson, one of the speakers for Lincoln Area Chamber of Commerce annual banquet on Jan. 31. "Each and every person in this room has something they can use to serve other people."

Even the person with the smallest store in the community has a platform and an opportunity to help others, Donaldson said, adding that he believes people have a responsibility to "use that door" to give back and serve others in "some way, fashion or form."

Donaldson closed with a challenge to give back but used his family's story to get to that point.

He said the story begins with his dad, Sam Donaldson, and that's what set the tone for Sam's Furniture today and explains why Joe uses his business to help people and many organizations.

Donaldson's father was born in Texas in 1943. He had an eighth-grade education. His father died and the kids had to quit school to pick cotton.

Donaldson's father was in the U.S. Navy and worked in the corporate world.

The family moved to Northwest Arkansas in the early 1990s from California and Donaldson's father opened a furniture store in 1991.

"We were late to the game in business in Northwest Arkansas," Donaldson said. "There were several others in our industry that are still here but they were way ahead of us in the game."

Donaldson graduated from Springdale High in 1996, enlisted in the U.S. Army and served for 10 years around the world before returning to Arkansas in 2006 to work for his parents.

"I figured I would do this the rest of my life. I know business. It's furniture. It's fine," Donaldson said.

He learned the business and the store continued to grow. Around 2013 or 2014, Donaldson said his father asked how committed he was to continuing with the business. His father had been diagnosed with prostrate cancer. He passed away in 2017.

Donaldson said he assured his dad he wanted to stay with the business but told him, "I want to go big with it."

His father was fine with that goal but told his son he would only give his blessing for a mega furniture store, if he used it for "serving others equal to or more than your goal or your plan to better your financial livelihood."

Sure, let's do that, Donaldson said, adding that within a year, he gave his father a 40-page blueprint of how he planned to make money and serve others with the store.

So as a 36-year-old, he borrowed $12 million to build the new Sam's Furniture store in Springdale.

At the time, Donaldson said he didn't think about the true potential of his business and how it could impact others.

"I was thinking about building this store and hiring more people to make a better living and sell more furniture," he said, throwing in his trademark phrase "Get it at Sam's" to those in the banquet room. "I don't think I realized what I was committing to or what it would mean."

Within three to six months after the new store opened in 2015, volume started going up. This made sense, Donaldson said, the store was bigger and had better exposure from the highway.

Donaldson did not give out dollar amounts but said Sam's Furniture finished 2019 exactly three times the volume the store was producing in 2015.

"Glory be to God," he exclaimed.

Today, Donaldson said he goes into his store every day strategizing a little differently. Yes, he continues to tracks sales and the financial side of the store.

But his first instinct now is to look for a new way to get involved with another organization or to serve somebody through the store.

"Sell furniture, that's great," he said. "Bills are paid and we're making a profit. What are we going to do with that profit?"

His thought everyday, he said, is to look at how God has grown the business and then find ways to sow that into someone else's life.

Sam's Furniture has a mission statement placed in the back of the store. It's simple, Donaldson said: "To be the best furniture store in Arkansas...while serving others in our community and around the globe."

He closed his remarks to those in the room: "Take your talents and look for opportunities to serve others...It's absolutely our responsibility."

Print Headline: Looking For Ways To Give Back To Others