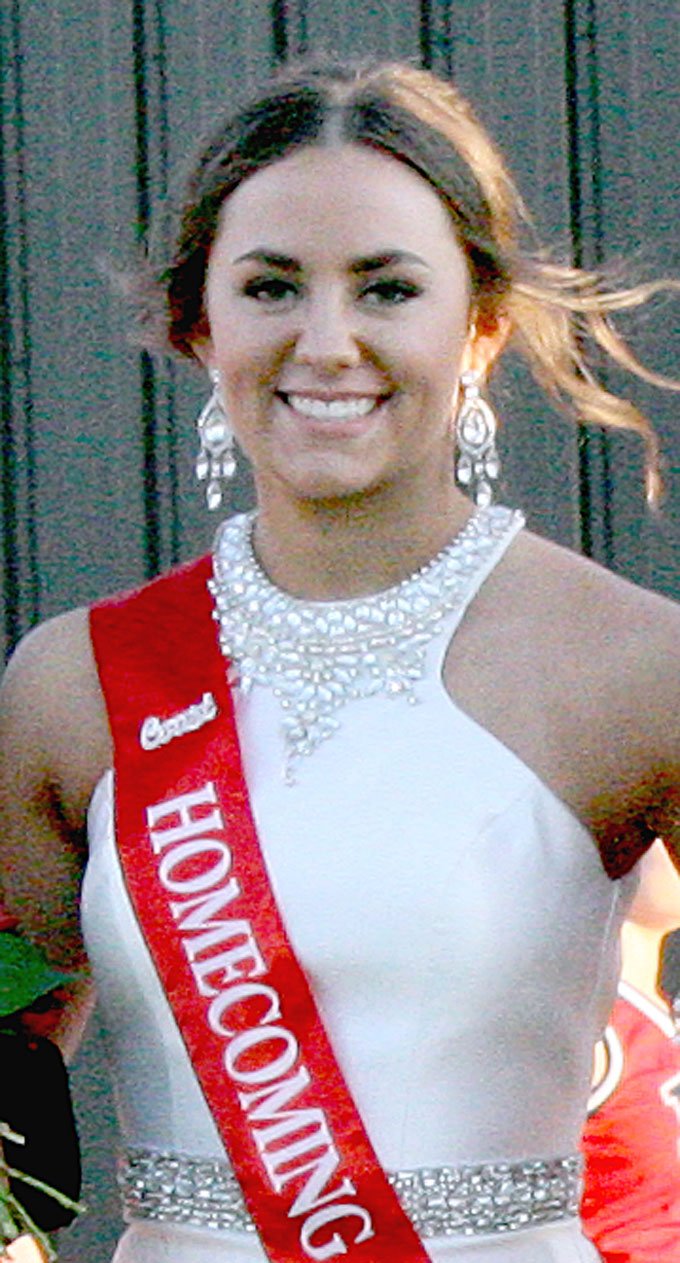 MARK HUMPHREY ENTERPRISE-LEADER Farmington senior Makenna Vanzant, shown during Homecoming ceremonies Sept. 27, 2019, battled a life-threatening illness, HUS, which stands for Hemolytic uremic syndrome, spending 16 days in the hospital prior to her sophomore basketball season. Makenna shared her personal testimony of her miraculous recovery during a Fellowship of Christian Athletes event held at Farmington's Allen Holland Field. She is beginning her fourth year as a starter for the Lady Cardinal varsity.

FARMINGTON -- With every dribble executed, each shot made, rebound, steal or assist, Makenna Vanzant celebrates life and the joy of playing basketball.

For 16 days in the fall of 2017 prior to her sophomore season the teenager lay in a bed at Arkansas Children's Hospital at Little Rock. A year later Makenna took the platform during an Oct. 10, 2018, "Fields of Faith" event sponsored by the Fellowship of Christian Athletes at Farmington's Allen Holland Field, to share her personal testimony in her own words.

After taking the microphone, Makenna admitted she was super nervous, yet said she knew God put her in this situation for a reason and she wanted to tell everybody her testimony.

Mckenna said for those who know much about her, they know basketball is a huge part of her life and it has been since she was little.

"I never knew when I was young how important my basketball family would become," Makenna said.

This story began during off-season following a freshman year when she broke into Farmington's starting lineup and led the 5A West in scoring. Makenna explained the off-season is when athletes work hard to prepare their bodies for the grind of the season, adding just like any sport, off-season is time to work on all those things basketball players don't have as much time for during the season.

She'd worked hard to put on some muscle weight in the weight room. The team had run many miles to get into shape for the games.

"I had put up many shots to get ready for my opponent, and I never knew I would soon be facing the biggest opponent of my life. And it wasn't on the court or in a game," Makenna said.

On Oct. 16, 2017, everything changed. Makenna woke up not feeling well and after a doctor's visit turned into an emergency room visit, she was immediately transferred by ambulance to Arkansas Children's Hospital in Little Rock.

"I felt horrible, but after some wonderful IV drugs I was comfortable," Makenna recalled. "The ride to Little Rock in the back of an ambulance can be scary, but for some reason I wasn't scared. The EMT kept my mind occupied as my mom (Monica Vanzant) and I made the trip with my dad (Ryan Vanzant) driving behind us."

The family was still not thinking it was anything but a bad stomach virus. Makenna figured a couple of days and she would be back to normal, but those couple of days turned into a week of many tests and procedures. She still wasn't eating and didn't feel any better.

One day Makenna noticed medical personnel had been doing a lot of extra labs, but she wasn't sure why. That morning she was told her kidney function wasn't good and she would soon be having a kidney biopsy. That was the plan up until the last labs taken at 2 p.m.

After a week of not knowing anything and many labs later, Makenna lay in bed that afternoon with her mom sitting beside her, and her grandparents nearby. Suddenly a bunch of doctors came into the room. Makenna was about to hear serious news by committee.

"All those doctors told my family that my kidneys were not working and I was in kidney failure and we need to begin dialysis that day," Makenna said.

Doctors also said her blood was damaged and she would need to get a blood transfusion. That was when the doctor said, "You have HUS."

"All I heard was a term that neither me nor anyone else in that room had ever heard of," Makenna said. "HUS stands for Hemolytic uremic syndrome. It is a condition that affects the blood and the blood vessels. It results in the destruction of blood platelets, a low red-blood cell count, and kidney failure due to damage to very small blood vessels of the kidneys."

HUS can also affect the heart and the brain.

The next thing Makenna remembers was hearing the doctor say to her mom, 'You need to call your family now.'"

Hospital personnel immediately brought in different scanner machines to look at her heart. She was taken down to have an ultrasound of her kidneys, and then transferred to the pediatric ICU.

"At this point, I still wasn't scared. Again something inside me gave me peace," Makenna said. "That peace during my situation was God, and it was knowing I had no control of the situation and I put all my faith in him as I know many of you did as well."

While Makenna was undergoing more tests and procedures in Little Rock, her family, friends, church family, team, coaches and community prepared to stand on her behalf back in Farmington. An emergency prayer vigil was held within hours of her being admitted to ICU.

Later Makenna was able to witness the outpouring of support and intercession through photos texted to her family and videos posted online. She was touched.

"My team who stood beside me on the court, now stood beside me hand-in-hand in the gym we played many games in praying for me. My community and surrounding areas joined as one," Makenna said, adding somberly, "Without those prayers I'm not sure I'd be here today."

Makenna stayed in ICU five days as hospital staff continued to take labs throughout each day. After a couple of other scares her numbers began to improve.

Meanwhile Makenna's lifelong basketball connection opened up avenues for coaches, players, and fans to discover opportunities to minister unto her and her family. The community was much larger than she dreamed of.

"Basketball is a team sport and it has taught me so many things. It has also brought me so many friends that I would never met had I not played," Makenna said.

During her illness teams from around the state joined her own team with support and prayers. Some, such as Farmington boys basketball coach Beau Thompson visited. Harding coach Rusty Garner along with three of his players even came and prayed with Makenna and her family at the hospital. Strangers she had never met wanted to drive to see her at the hospital and pray with her.

Her teammates and coaches kept in touch taking on the role of cheerleaders letting Makenna know they were preparing for the fast-approaching season and believing for her return to the lineup. She joined her faith with theirs, determining within her heart to overcome the adversity.

"My Farmington team continued working hard every day while I fought this illness," Makenna said. "I knew I was losing everything I'd gained during off-season, but even though I lay in bed sick many miles away from my teammates, I was planning how I'd get back to team, to them, and regain everything I had lost. I knew they would be there to support me."

Soon Makenna didn't have to have dialysis every day, and after numerous blood transfusions doctors said her blood had improved enough that she probably wouldn't have to do anymore.

"The doctors kept looking over my numbers every day, amazed at how quickly I was improving. I wasn't surprised because I knew I had a higher power helping me. All of the prayers being prayed for me were heard," Makenna said. "I was a miracle. After 16 days in the hospital they told me that I could go home. I remember how excited I was to finally be going home."

Makenna said she doesn't know why she got sick and never even questioned that.

"All I know is that maybe what I went through was to help someone else have faith in their own situation of sickness, trials or troubles," Makenna said.

"I encourage all of you to remember that with God nothing is impossible. In Matthew 17:20 it says, 'For truly I tell you if you have faith the size of a mustard seed nothing will be impossible for you.' That's my testimony and I want to thank you, everyone for coming out and listening to everybody."

The "miracle girl" returned in time for Farmington's season-opener against rival Prairie Grove on Nov. 27, 2017.

As her senior season gets underway this week, Makenna's will to win on the basketball court remains as strong as ever.

Print Headline: Celebrating Life And Basketball With Every Dribble