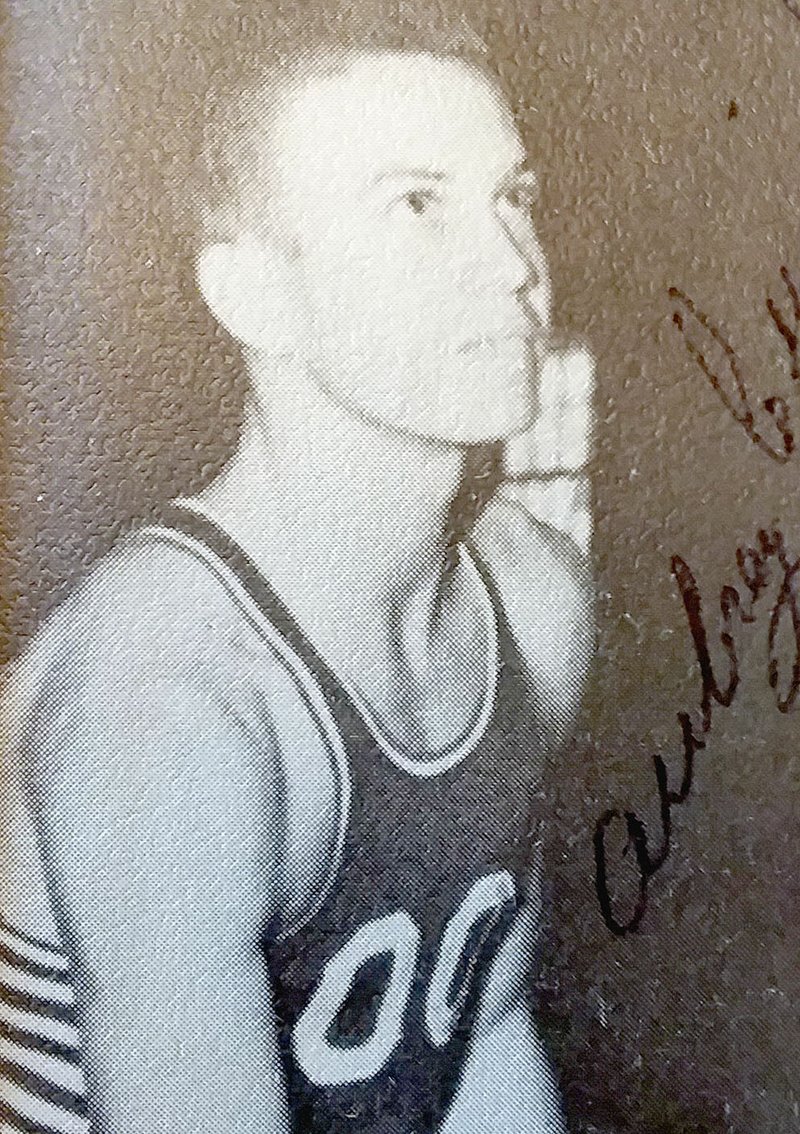 Yearbook photo/Aubrey Cuzick started at guard for the 1955-1956 Lincoln boys basketball team. He helped the Wolves rack up 33 wins and become the first team in school history advance to the state tournament. Teammate Loyd Jones describes Cuzick as the kind of guy you needed at guard that could penetrate and get the ball down the court. He was named to the All-tournament team of the Springdale Tournament.

Both played basketball in an era when the lane was only six feet wide. Babb took advantage of defenses keying on Lincoln's post game featuring 6-7 Willis Edmiston and 6-3 Loyd Jones with his ability to score proficiently from the perimeter.

For 63 years the Arkansas High School Coaches Association East‐West All‐Star boys’ basketball game has become an Arkansas tradition. Many of our state’s basketball legends have participated in the All‐Star game and provided fans with thrilling moments. Listed below are a few of those exciting performances. 1956–Loyd Jones of Lincoln becomes the first player to score in the inaugural All‐Star game at the Little Rock High School (Central) Gymnasium. Jones’ West team cannot hold this early advantage, however, and the East wins, 52‐39.

Babb helped Lincoln advance through the State tournament to the 1956 state finals, which the Wolves lost 73-70 to Valley View.

Mikan caused the NBA to change its rules, widening the lane from to 12 feet which became known as "The Mikan Rule," and eventually implement a shot clock. His defensive prowess prompted the NCAA to ban goaltending.

A typical basketball game looked a lot different in the 1950s. There were no 3-point shots or alternating possessions and jump-balls played an integral role in determining the course of a game.

"We did a lot of trying to get the ball into the post," Jones said. "I liked to shoot two-footers instead of 20-footers. A lot of it was we played pretty good defense and rebounded the ball. It was a lot different, but if you look at the scores -- we were scoring in the sixties and seventies pretty regular even back then."

Babb, Jones and the 1955-1956 Wolves averaged 63.9-points-per-contest throughout a 36-game season that included four games in the distict tournament and four more at state. Lincoln scored nearly 64 points-a-game in the regular season

"The free throws have changed, a lot of rules have changed since 1956," said Jones in a recent interview. "I was a post player. Willis Edmiston and myself we played kind of a double post. Willis was 6-7, a pretty good-sized guy from down at Morrow. He and I played the post. Our two guards, their job was to get the ball to us or we felt like it was, at least."

At times the Wolves worked an inside-out game going into the post and if the shot wasn't there throwing the ball back out to Babb for a jump-shot outside.

"We looked for that. That was a big part of our offense," Jones said. "J.T. Babb was a good outside shooter and between he and I we got a lot of the points in a ball-game."

Generally, however, the Wolves preferred a shot selection around the basket under first-year coach Roy McClelland, who according to Jones, was an ex-football player at the University of Arkansas, and likely didn't know a whole lot about basketball.

"The thing that made him a good coach, when I look back on it, he was a good motivator," Jones said. "I don't know that he was a great x and o man. We never worked a lot on patterns or special plays or anything like that, but he was a good motivator. He made you want to go out and rebound the ball and get shots and play defense. I think that was his big thing."

McClelland organized his offense around the team's strengths.

"If I got the ball in the post I thought it was my job to score, but if you couldn't do that we did have one or two outside shooters that could get us some points," Jones said.

The philosophy was to seek out a high-percentage shot and if that wasn't readily available, take a quality shot after that. The Wolves tried to work the ball into the post as much as possible.

"We felt like that was our best chance to get a good, open shot in the middle somewhere," Jones said. "I think we all felt like we were good shooters. We did have a lot of confidence as a team and we had a lot of success. That kind of builds confidence. We had some games where we did score quite a bit of points. J.T. was our high-point scorer. I scored quite a bit occasionally."

Jones recounts the team enjoyed a strong sense of community support throughout the season and into the state tournament where Lincoln finished as State Runner-up.

"(We) had a good following that went down to Little Rock with us. They pretty well packed the gym for us during the season and very, very supportive. We had a few hamburger fries and things after the games. We had a good time and we celebrated," Jones said. "I'm going to say Lincoln was a basketball town back in those days. Football was just kind of beginning and they played a six-man football, I believe during that year. So basketball was the big thing, and it was followed pretty strongly by the community."