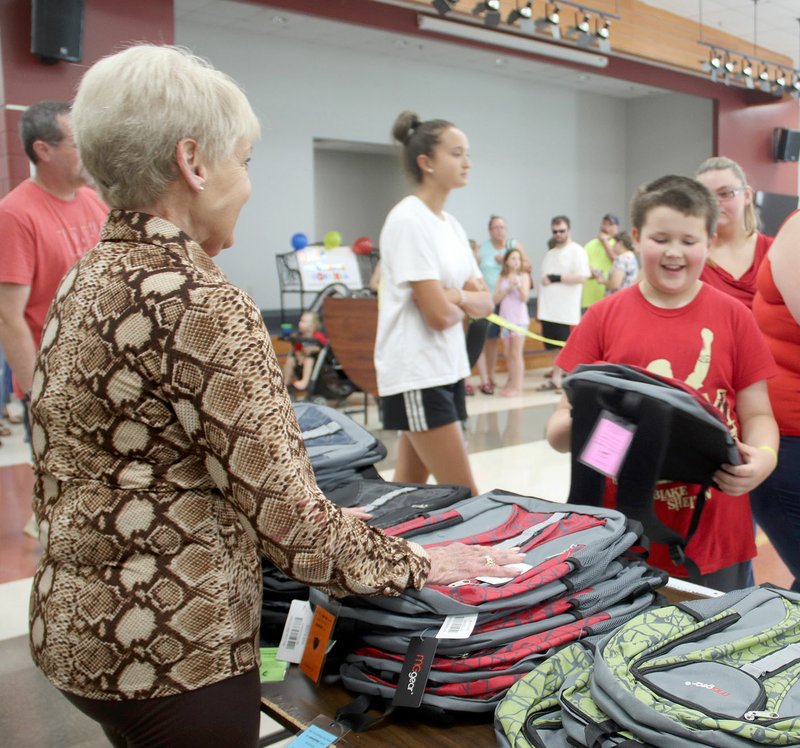 EDITOR'S NOTE: Lots of news happened in Lincoln, Farmington and Prairie Grove in 2019. The Enterprise-Leader will highlight some of the top stories from each community over the next three weeks.

Hutchens had been a member of Lincoln City Council for more than 12 years and served on many city committees before throwing his hat in the ring to run for mayor. Hutchens is Lincoln's first new mayor in 12 years. Former Mayor Rob Hulse did not run for re-election.

Both Bryson and Christian were unopposed as candidates for local office. Bryson has lived in this area since 2000. He also has served as a member of Lincoln Planning Commission and Lincoln Board of Adjustments since early 2017. Christian has lived most of her life in Lincoln. She grew up in Lincoln, graduated from Lincoln High and moved away before returning to her home town.

Community Clinic ended its partnership with the school district because there wasn't enough participation to justify expenses, according to the organization. School Superintendent Mary Ann Spears reached out to Washington Regional and the two negotiated a contract so that the district would have a health clinic on campus. The clinic also is open to the community.

The city's 2019 budget provided money for a new officer for Lincoln Police Department, bringing the total staff to six officers, including the chief and assistant chief positions. Money was reallocated and some costs eliminated to make it possible for the city to add a new police position.

Later in the year, Lincoln School Board gave the OK to increase funding for a second school resource officer to be assigned to the high school campus. Chief Kenneth Albright, also a School Board member, said the new SRO position would be a part-time job filled by rotating certified police officers from outside the department.

The council unanimously voted at its January 2019 meeting to increase the city's water rate by $13.50 for all customers to pay for a new water storage tank that will hold 2 million gallons of water. The tank will serve as a backup if something happens with the water from the Benton Washington Regional Public Water Authority, commonly known as Two Ton.

The council approved a low bid for the project in March. The city is paying for the $4.5 million project with revenue bonds and the $13.50 rate increase from each customer will be used to pay off the debt. Total costs include land purchase, tank construction, geotechnical study, fees and contingency.

"We're looking at a lot more momentum than we've had in a long time," said Mayor Doug Hutchens, who chaired the city's Planning Commission in 2018.

Lincoln Area Chamber of Commerce named Doris Thurman as the recipient of the 2019 Bud Cox award, an award given each year to an outstanding citizen who has given back to the community. Thurman volunteers in the Arkansas Country Doctor Museum, sews and bakes goods for others, has babysat children and helped elderly people, cooked for Kiwanis meetings and worked in school cafeterias.

After spending 2018 dealing with the Town House apartment complex and its many fire code violations, Lincoln City Council began discussing another development, commonly known as the Lincoln Motel, in 2019. The 'motel' was found to have 37 fire code violations during an inspection by the county fire marshal.

Lincoln Elementary School was honored as one of 10 schools in the state to receive a 2019 Outstanding R.I.S.E. Arkansas School Award. Lincoln served as a pilot school for the reading program called R.I.S.E., which stands for Reading Initiative for Student Excellence. Teachers attended initial training the summer of 2017, and the school began offering the program during fall 2017.

The overall goal of R.I.S.E. Arkansas is to encourage a culture of reading statewide through community partners, parents and teachers and to establish the importance of reading in homes, schools and communities. It is based on the science of how children learn to read through movement, touch, visual and auditory senses.

Former Lincoln Police Chief Brian Key pleaded guilty May 13, 2018, in Washington County Circuit Court to a reduced, misdemeanor charge of possession of drug paraphernalia. A felony charge of tampering with physical evidence was dropped. Circuit Judge Mark Lindsay sentenced Key to one year of probation and one day in jail with credit for time served. Key was fined $200 and ordered to pay almost $600 in court costs and fees.

Key agreed to continue drug rehabilitation, voluntarily withdraw his law enforcement certification and never seek law enforcement employment again as part of his plea agreement. Key had been with the Lincoln Police Department for 15 years.

Arkansas State Police opened an investigation into possible mishandling of evidence in Lincoln on Sept. 25, 2017. The state police arrested Key on Dec. 13, 2017, in connection with the possession offense and tampering charge.

Spears: Rural Superintendent Of The Year

Mary Ann Spears, superintendent of schools, was named the 2019 Superintendent of the Year by the Arkansas Rural Education Association for the northern part of the state. Spears received the award during a surprise presentation before the School Board's May meeting. Spears said she is passionate about rural education and was honored to be recognized as a leader in that area.

Farm Family Of The Year

Three brothers -- Seth Pitts, Connor Pitts and Alex Pitts -- were named the 2019 Washington County Farm Family of the Year for their cattle and poultry farm Sugar Hill Ranch. Other family members are their grandmother, Mary Alice Pitts; mother, Guatha Pitts; and Seth's wife, Alyssa, and daughter Lennon. At the time, a second child was on the way. The ranch has 1,100 acres and runs 550 head of mama cows and beef cows, 20 registered Angus bulls, has five chicken houses to raise broiler hens and produces about 2,500 bales of hay each year to feed the livestock in the winter months.

Back To School Bonanza

The community served 212 children from 99 families during its annual Back to School Bonanza held before the start of the 2019-20 school year. Lincoln's bonanza is held at Lincoln Elementary School and is sponsored by Lincoln Bright Futures and Central United Methodist Church.

Polytech Plastic Molding & Extrusion of Prairie Grove purchased the empty Tyson Foods hatchery in Lincoln in 2019 to use as a distribution center and for future growth of the company, according to owner Jim Benton. The building at 113 W. South St. has 40,000 square feet and is located on 13 acres. It is in the Lincoln city limits west of the city park. The building is called the Polytech Distribution Center.

Good times never stopped for those attending the 66th annual Lincoln Rodeo which featured three nights of action in the Lincoln Riding Club Arena for three days in August. The 2019 rodeo was highlighted by the first successful bull rides at the event in several years. Landree Cunningham was crowned the 2019 rodeo queen.

Crowds showed up Oct. 4-5 for the 44th Arkansas Apple Festival, and attendance was so good that a washout on Sunday, Oct. 6, didn't hurt overall sales. Saturday was the busiest day and many people lined up to watch the annual parade go around Lincoln Square. Afterward, it was standing room only as Lincoln Square was alive with activity. Families and others browsed through the many booths on the square or enjoyed food and the children's area.

This year's Apple Festival had 80 vendors, and it was estimated by city officials that 2,000-3,000 people came through the festival on Friday and Saturday.

School Superintendent Mary Ann Spears gave the news during the school's Annual Report to the Public that student enrollment at Lincoln Consolidated School District has declined for at least the past four years, and that is a concern to school officials. Lincoln's enrollment has gone from 1,198 students on Oct. 1, 2015, to 1,050 on Oct. 1, 2019.

Lincoln Bright Futures hosts an annual Thanksgiving meal to thank its volunteers for giving time, talent and treasures to the students in the district. During the past year, Lincoln Bright Futures met 522 specific needs identified through its Facebook page and helped in numerous other ways. Needs met included shoes, paying water and electric bills, diapers, graduation costs, club fees and school supplies.

Lincoln Square was the site for two community events during the Christmas season. A lighting of the square and Christmas Parade was held Nov. 30. This was sponsored by a new organization called Lincoln Events on the Square. The annual Christmas on the Square, sponsored by the city and Lincoln Chamber, was held Dec. 16 and featured a free chicken dinner, visits with Santa, pony rides and other activities. Both events attracted many people to enjoy festivities on the square.

Print Headline: LINCOLN: A Look Back At 2019