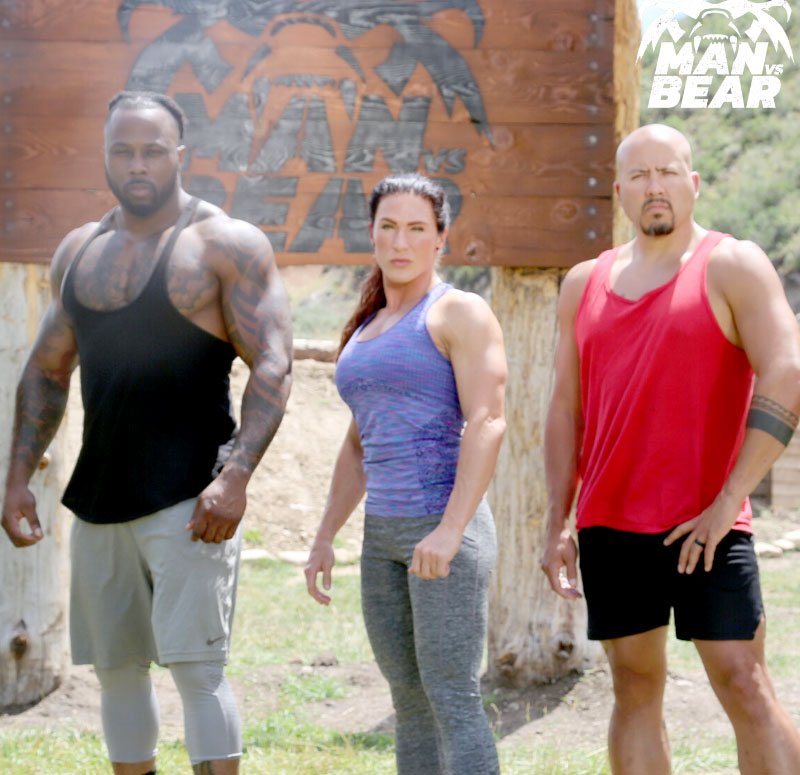 Sheldon Jackson stood up to three grizzly bears and walked away a champion.

The Watts, Okla., man appeared on the Discovery Channel show Man Vs. Bear on Dec. 18 with two other contestants, Hannah Johnson, a firefighter from North Carolina, and "Kannon" Joseph Lewis, a bodyguard from Texas. They competed in various challenges against three grizzly bears -- Bart, Honey Bump and Tank -- at a sanctuary on Bear Mountain in Utah. Jackson scored highest in all of the challenges.

Man Vs. Bear debuted on Dec. 4 and Jackson was featured in episode three, according to a press release from Paria Sadighi, senior vice president of communications, public relations and marketing for Kinetic Content.

Each episode features three contestants who compete in a series of challenges based on the bears' natural instincts, as well as predatory skills and actions. The contestants change weekly.

The winner gets to go toe to toe with Bart, the largest bear on the mountain. If the contestant scores enough points he will be placed on a leader board and possibly return for the season finale to challenge the bears again. Jackson, a maintenance manager at Simmons, swept all of the challenges and received 26 points, making him the winner for the evening.

"It's one of those once in a lifetime opportunities," Jackson said of his reason for going on the show. "Everyone wants to be the baddest guy in the room and what better way to prove it than going up against a grizzly bear."

He may have proven that he was the baddest person of the evening, but Jackson said he left the show feeling awed by the three bears who live on the mountain.

Bart, Honey Bump and Tank are free-range captive bears and have lived their entire lives among humans, according to the Discovery Channel's website. Bart and Honey Bump were rescued as cubs after their mother was killed by poachers, and Tank was born into captivity, the website states. The bears rely on exercises and routines of their caretakers to remain happy and healthy at the Wasatch Rocky Mountain Wildlife Ranch, it states.

The competitions for the show were designed around the exercise routines the bears follow, the site states. These exercises are meant to be a combination of encouraging natural Grizzly instincts and actions, it states. Bart, Honey Bump and Tank were never given an action that they couldn't complete easily and safely and were never forced to compete. They were well rewarded with their favorite treats for participating, the site states.

"Deep down you feel a connection," Jackson said. "I feel like I met him (Bart) before. I would have gone bear hunting before this, but now after looking in the bear's eyes I don't think I could."

Jackson said one of the hardest parts was getting out of his own head. He just focused on the task at hand and tried to not think about the dangers that he faced, he said.

Jackson, who is also a coach for the South Delaware County (Okla.) Outlaws youth football team, said he felt like the underdog throughout the filming of the show but didn't let that bother him. Six years earlier, Jackson weighed 300 pounds he said during the episode. One day he woke up and couldn't walk. That was when he decided to lose the weight, he said.

"I like to tell my kids 'you don't have to be the biggest and the strongest, you just have to have the most heart,'" Jackson said during a recent interview.

During the show, Jackson played a giant game of tug of war with Bart, pushed a barrel five times his weight while Bart pushed his own barrel, faced off against Tank in an eating contest and ran obstacle course while being chased by Honey Bump.

Finally, Jackson faced off against Bart in a challenge called human prey. During this objective, the contestant is placed in a steel cage that resembles a human-sized hamster ball. The contestant must prevent Bart from rolling the cage into a hole in the ground. Jackson lasted eight seconds before Bart pushed him in the hole, yet it was long enough to score the last two points and have his name placed on the leader board.

Jackson said he hoped to be back for future episodes. The top three contestants on the leader board at the end of the season get to return to Bear Mountain, according to Sadighi. Presently, Jackson is in second place but there are five more episodes to go in season one so he could still be knocked out of the top three.

Jackson said that being the underdog isn't always a bad thing. He encouraged people to trust their own processes and to go out and fight the bears in their lives.