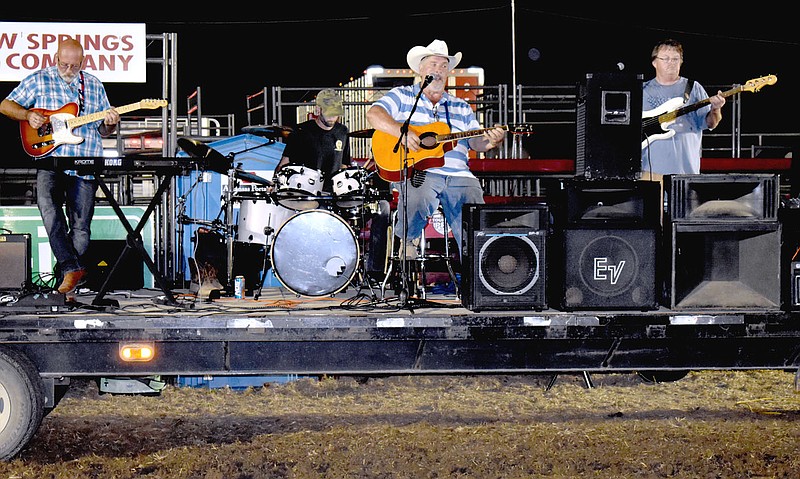 MARK HUMPHREY ENTERPRISE-LEADER/ Phil McGarrah and his band, “Runnin’ On Empty” performed live after Saturday's bull riding concluded at the Ogden Ranch. McGarrah opened with an original composition, “Huckleberry Lane,” based on memories of attending Harvey Jones Elementary School and his teacher, Jean Fitch, mother of "Bucking' At The Ranch" promoter Nathan Ogden’s wife, Tracy, and grandmother to the couple’s daughters, Oaklie and Huntlea.

PRAIRIE GROVE -- Pick-it Construction has 23 employees according to its Better Business Bureau online profile, but one entrepreneurial foray hosting a PBR event greatly expanded the payroll -- at least temporarily.

The two-day Professional Bull Riders Touring Pro Division "Buckin' At The Ranch" hosted by Pick-it Construction at Ogden Ranch Friday and Saturday created a payday for scores of people whose income diminished substantially because of covid-19 sanctions.

"I'm glad to be here, finally get to work again a little bit," said Dakota Riggin, who mixed the soundtrack spinning a mixture of classic rock and country tunes during the bull riding.

Riggin graduated from Lincoln in 2014 and labored to increase his business which required extensive travel on the rodeo circuit to far away places such as Columbia Falls, Mont., home of "Buckin' At The Ranch" champion Matt Triplett, a driving distance of 1,691 miles and around 25 hours on the highway.

"This was supposed to be one of my biggest years, but covid kind of canceled everything. It's nice to be close to home," Riggin said.

Riggin estimates he's lost more than $31,000 in revenue this year; and the numbers far exceed that for stock contractors and many others involved in pro rodeo as well as entertainers such as Heath Sanders, who moved to Nashville, Tenn., from his hometown of Marshall following an invitation to appear on the Bobby Bones show in 2018 after an acoustic cover version of Chris Stapleton's "Either Way" posted on his YouTube Channel went viral.

"We've lost more than 15 [live] shows," Sanders said after performing Friday night. "More so than the money, you miss the people, hugging necks. That's what we do this for -- building relationships."

Sanders, who has a 4-song EP forthcoming, helped the event draw people from across the state. The Hill family came from Mountain Home, cashing in on an opportunity to see one of Arkansas' home-grown good ol' boys perform live.

Earlier in the evening Sanders told "Buckin' At The Ranch" promoter Nathan Ogden, who owns the ranch and Pick-it Construction, "Somebody's got to kick things off to kick-start the economy."

"Everyone who's tried to do something to open it up has been taking a lot of bullets and taking a lot of punches for us," Sanders said, emphasizing he's not suggesting anything crazy or unreasonable.

"Let's adhere to guidelines, but people got to eat and bull riders got to eat."

Fans seemed equally thrilled with musical acts and the bull riding action, which wasn't decided until Triplett won the top $10,000 prize with an exciting 92-point score on the last bull ride Saturday.

"We don't get much stuff like this in Prairie Grove," said Justin Harp, of Springdale, who visited the ranch for Luke Bryan's Farm Tour concert in October 2016.

"It's something special for these small communities to have these guys come in there and do that, especially with covid. PBR, Springdale couldn't do it, but Prairie Grove took charge," Harp said. "It's good to see these smaller communities doing stuff. Then Heath [Sanders], he's a local boy from Arkansas playing here."

Ogden revived the PBR event originally scheduled as part of Springdale's Rodeo of the Ozarks, which was canceled for 2020, and booked Sanders, who became the second country star to perform live at the Ogden Ranch in the footsteps of Bryan's Farm Tour in 2016.

"Well, somebody had to open for him [Heath Sanders]," Ogden said, generating a round of laughter while Sanders contemplated the opportunity.

"I'm just blessed to be here all the way around," Sanders said.

On Saturday, Phil McGarrah and his band, "Runnin' On Empty" performed live after the bull riding.

McGarrah's mother, Mary Juanita Rhine, was born in Prairie Grove and attended Viney Grove School. He expressed appreciation for the gig by opening with an original composition, "Huckleberry Lane," based on memories of attending Harvey Jones Elementary School and his teacher, Jean Fitch, mother of Ogden's wife, Tracy, and grandmother to the couple's daughters, Oaklie and Huntlea.

"We do a little bit where the community can come out and enjoy themselves," McGarrah said. "It's hard to find any activities. One minute it's open and the next it's shut down, looks like."

McGarrah went to school at Huntsville with Lew Thompson, whose trucking company along with many other local businesses helped Ogden put on the event.

"He's been successful. That's a good thing," McGarrah said. "If people get in there and work you can be successful no matter what you do."

For Ogden, success birthed out of daring to dream -- bringing the Professional Bull Riders Touring Pro Division to Prairie Grove, an unprecedented event for the community, which provided income for people looking for work.

Every farmer knows a seed planted in good soil and nurtured to fruition will generate a harvest. 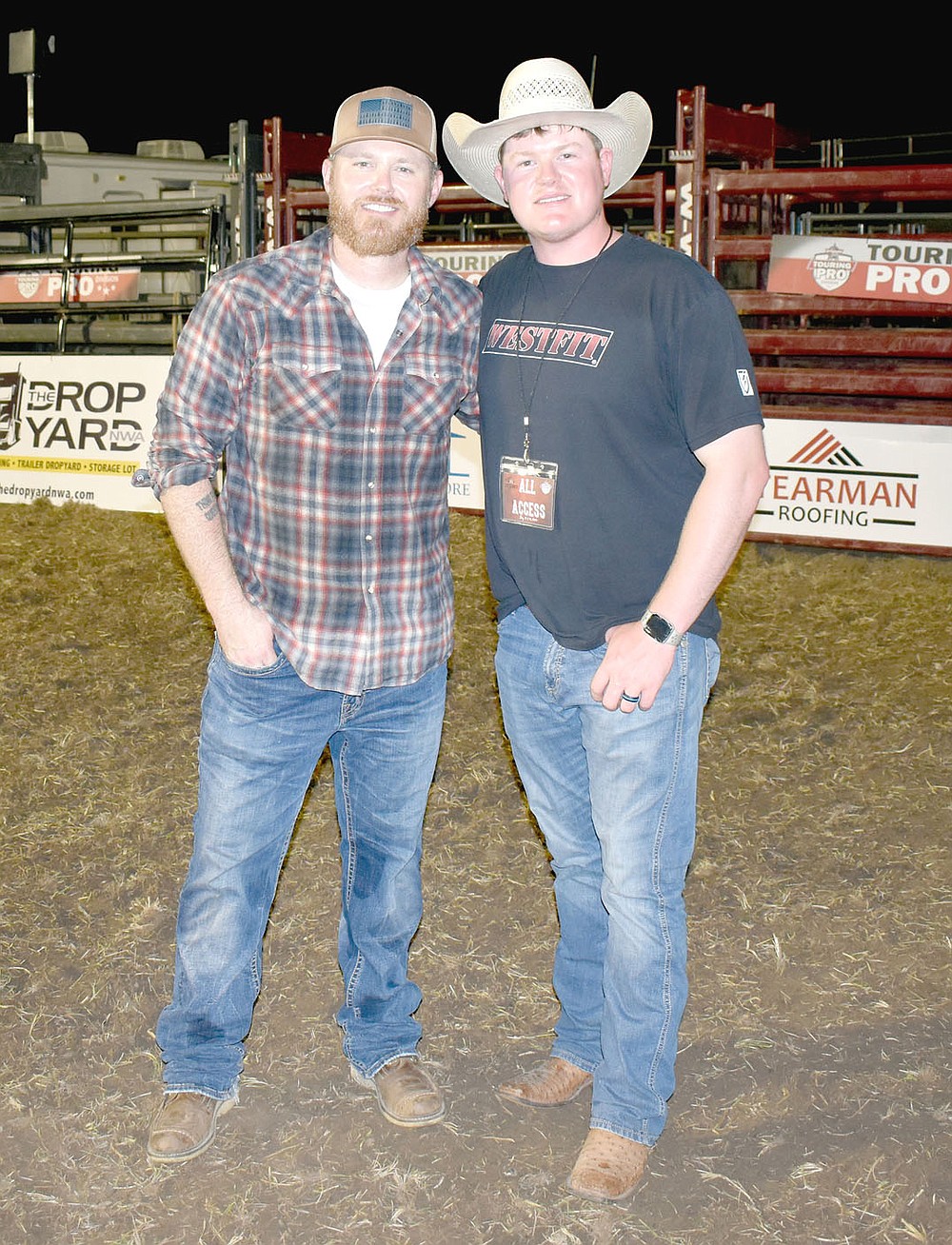 MARK HUMPHREY ENTERPRISE-LEADER/Nashville recording artist Heath Sanders (left), a native of Marshall, Ark., and Dakota Riggin, a 2014 Lincoln graduate who spins tunes for rodeo soundtracks, were among those earning a pay check during the Professional Bull Riders Touring Pro Division "Buckin' At The Ranch" event hosted by Ogden Ranch at Prairie Grove Friday and Saturday. Sanders went nearly three months without a live gig while Riggin estimates $31,000 in lost revenue due to rodeo cancellations from covid-19. 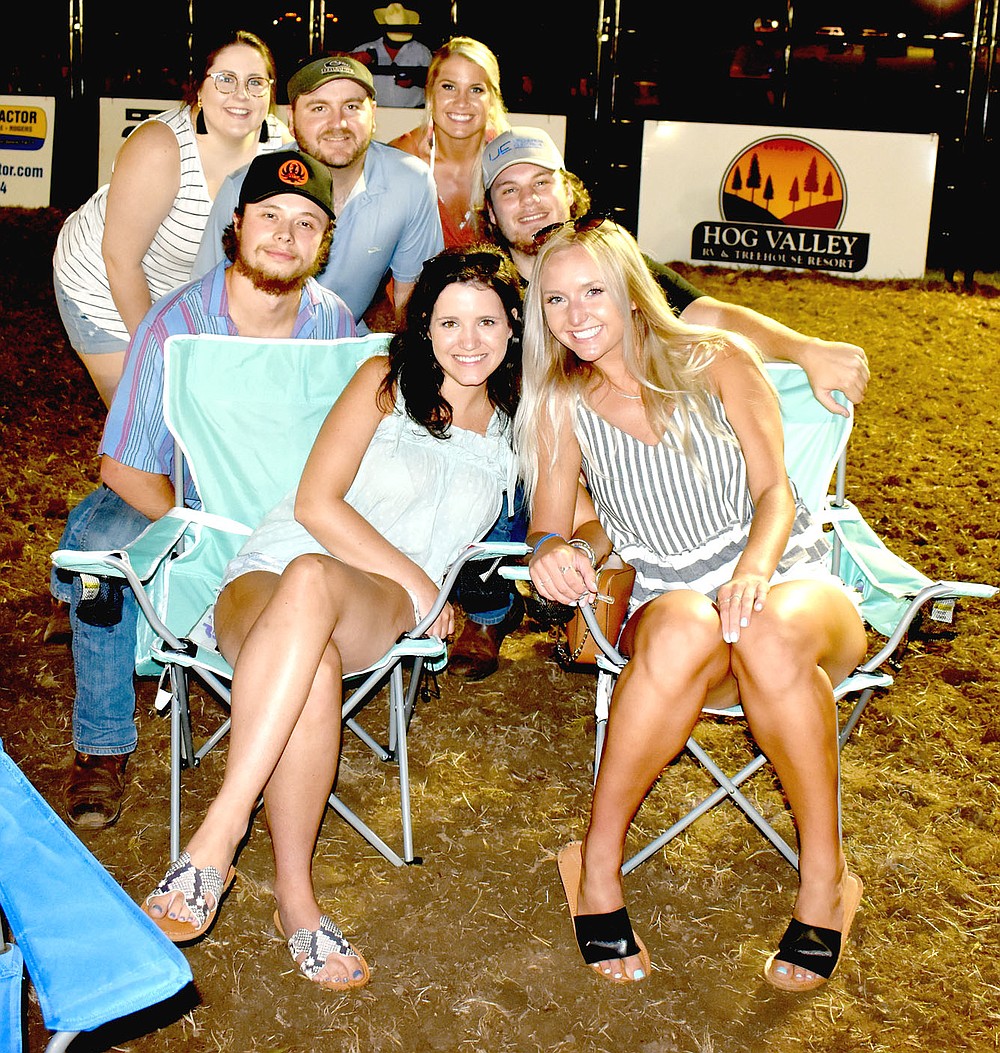