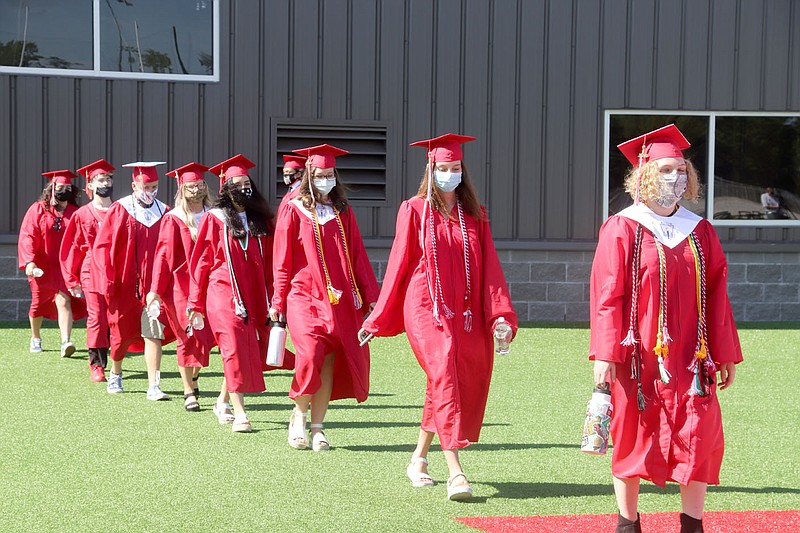 LYNN KUTTER ENTERPRISE-LEADER Farmington's 2020 graduates, all wearing masks because of the coronavirus pandemic, file into Cardinal Stadium on Friday morning to "Pomp and Circumstance," normally played by the high school band but this time played over the sound system. The Class of 2020 had 187 graduates.

FARMINGTON -- Farmington Class of 2020 is the first class to attend all three years at the new state-of-the-art high school facility and the first to graduate from the new Cardinal Stadium.

The graduates' celebration, though, is not what those students imagined as they entered high school three years ago.

Class president Reid Petrie said he was sure students could see themselves gathered together in the middle of May, hugging each other, shedding a few tears and celebrating many shared experiences.

"However, that is not the case," Petrie noted, as he welcomed graduates and their guests to a ceremony Friday with restrictive guidelines because of the covid-19 pandemic.

Black chairs were placed six feet apart across the field, beginning on the 10-yard line nearest the indoor practice facility to the 30-yard line on the other end of the field.

Family members wore masks into the stadium and sat in family groups with physical distancing from other guests. Graduates also wore masks as they filed into the stadium to the traditional "Pomp and Circumstance." Many removed the masks after they were in place six feet apart.

Principal Jon Purifoy thanked everyone who made an in-person graduation possible.

"Some schools are not going to be able to do this," Purifoy said. "We were actually able to pull it off. I appreciate it. Long, hard work. Tough, tough year for you the last nine weeks of school, yet we made it here today."

Looking over the Class of 2020, Purifoy said, "How proud we are of these fine young men and women. We expect to see great accomplishments from them in the future."

Reid, looking over a graduation ceremony different from past years, said, "This is all due to one thing: change. This is one of the certain things in life that Benjamin Franklin should have added to death and taxes. Change is going to happen to us, and it's almost always never planned. This circumstance, of course, was never planned by any of us. I assumed we would all be together one last time before we headed off into the unknown."

Petrie didn't describe graduation as the end of a chapter but as the "end of the first book of the series of stories that is our lives." After the ceremony, graduates will begin writing another book, a spin-off, he added.

"Most importantly and most excitedly, our spin-off book that starts tomorrow will include new victories, new triumphs, new achievements, new celebrations. And these joyous times are what make me eager to start writing our next adventure," Petrie said.

"Let's look back on our first book with admiration and not anguish, reverence and not regret, satisfaction and not sorrow. I know that good things are in store for all of us, each in our own way. Our first book has set up everything that will happen in the spin-off that will start tomorrow, and I pray that everyone will write a bestseller."

Jonathan Brye, valedictorian, also thanked everyone for coming together to provide a meaningful graduation.

Brye encouraged his classmates to practice self-discipline and work hard to reach their goals and be successful.

"My genuine piece of wisdom to all of you is to not expect for anything to be given to you in life," Brye said. "Pursue your goals with the mindset you'll have to work tirelessly to achieve what you want to achieve."

He said most of his friends and some teachers would probably say he likes to act "funny and stupid" more than act smart.

"I'm not up here because I'm a particular super genius," Brye said. "But I'm up here because I've worked incredibly hard toward something that I wanted. I've studied countless hours, worked through all the boring assignments and sacrificed many things in my life to reach the point where I am now."

Brye also told his classmates that another responsibility of adults is to vote, and he encouraged them to vote and not take the privilege for granted.

Salutatorian Joshua Jowers passed on several lessons he's learned so far in life: success does not come by working alone and do not procrastinate because you can waste time and opportunity by thinking about doing work, rather than taking action.

"One more thing I've learned and that is life is not fair," Jowers said. "I've learned this lesson by being given this platform to speak to you just because I got good grades and I was a good test taker. Now I understand nothing of how that qualifies me to be here speaking to you guys, but here we are."

He said grades came easy to him and he realized some students put in more work than he did to graduate and he wanted to recognize those efforts.

"I've learned the unfortunate truth that success often-times requires a bit of luck. I bring this up to encourage all of you who have put in more work than me to get to this point because it will pay off eventually if you don't quit," Jowers said.

He told his classmates to remember that it's not always about succeeding but about everyone you can help out along the way.

Jowers said he's seen acts of kindness from his classmates and because of that knows "you all have the power to plant seeds of positivity in those that you come in contact with in your next stages of life."