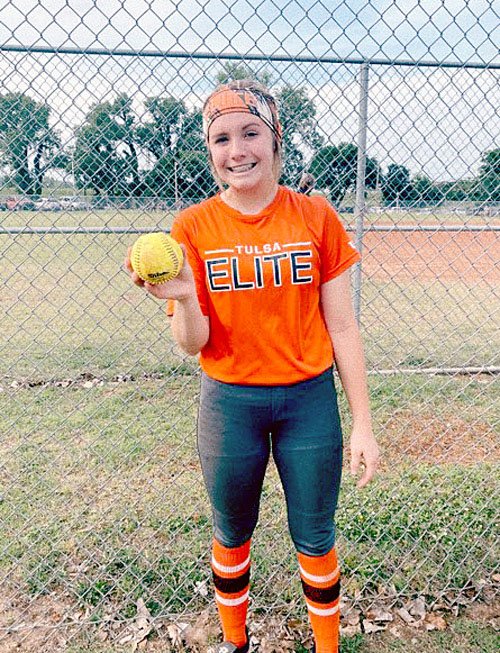 Submitted photo/Brinkley Moreton, of Summers, has been named the No. 15-ranked prospect by Extra-Innings Softball among the Class of 2025 Extra Elite top 100 players. The announcement was made late Thursday night. Brinkley is the daughter of Dax and Christina Moreton. She is a rising eighth-grader at Lincoln Junior High and plays travel ball as a member of the Tulsa Elite NWA 06 softball team.

LINCOLN -- Brinkley Moreton, daughter of Dax and Christina Moreton, of Summers, ranks No. 15 among America's Top 100 Softball players for the Class of 2025 according to Extra-Innings Softball.

Extra-Innings Softball announced its Class of 2025 Extra Elite top 100 players late Thursday night and Brinkley, a member of the Tulsa Elite NWA 06 travel softball team, came in ranked as the No. 15 player in the country.

"We are super proud of you Brinkley, hard work and determination paying dividends! Only the beginning for this talented young lady!"

The Class of 2025 extensive coverage began Monday, May 18, starting three weeks of announcements with 10 players revealed Monday through Friday each week counting down from the No. 100 ranked prospect.

As of Thursday the Moretons were anxiously waiting to learn where Brinkley would be rated. She had not been listed from No. 100 to No. 21 and they were hopeful she might crack the Top 20.

In a telephone interview Dax said he expected big news concerning Brinkley might come in at any time. A good portion of the day expired before the official announcement naming Brinkley as the No. 15 ranked player along with No. 20 through No. 11 was made at 10 p.m. Central Daylight Time.

Christina couldn't wait to share the news, saying, "We are extremely proud of her."

The 2025 Extra Elite 100 ranked prospects bio of Brinkley describes her as an all-around talent, who combines pitching, hitting ability, fielding skills and speed on the bases. The bio states that with a fastball that touches 62-64 mph, she is overpowering in the circle and dominates games against elite competition by mixing in a quality breaking pitches with her heat and refers to Brinkley as one of the most-feared batters in the Southwest and possibly the nation for her age group.

The bio praised Brinkley for consistently putting the ball in play sharply while hitting for both high average and power and listed statistics which back that up. Brinkley's batting average shows .457 with an on-base percentage of .569 and 94 RBIs. She went 29-7 in the circle with a 1.79 ERA striking out 222 batters in 175 inning. Last year she she was USSSA All-Region and USA All-American.

The rankings are led by Brentt Eads, Extra Inning Softball's President and Executive Editor, along with the Extra Inning Softball staff with input from more than 200 college and club scouts and coaches. Eads originated the Top 100 rankings lists used in softball, and has now ranked more than a decade of graduate classes (2014 to 2025).